The RealReal's shares sank after a report highlighting possible flaws in the process it uses to authenticate the luxury goods sold on its website, but management's reaction may be an opportunity to win investor confidence.

Online luxury consignment shop The RealReal ( REAL -3.05% ) promises that every Chanel handbag and Hermes scarf it sells is indeed the real deal. When a CNBC report earlier this month showed evidence pointing to the contrary, the stock fell, and it's since down more than 20%.

While the news obviously spurred some consumer-goods investors to run, analysts haven't been as quick to react. Data compiled by Yahoo Finance shows that Wall Street in general continues to view The RealReal as a buy. Although the authenticity questions didn't make for fabulous news, they're not an automatic reason to hit the panic button, either.

The RealReal is facing the same challenge as every luxury reseller: the counterfeit threat. Global trade in fake goods totals almost half a trillion dollars a year, according to the multinational Organization for Economic Cooperation and Development (OECD), and an article in the Harvard Business Review suggests that 40% of fake luxury goods sales happen online. The problem resulted in $30.3 billion in losses for luxury brands in 2018, according to a 2018 report on global brand counterfeiting. 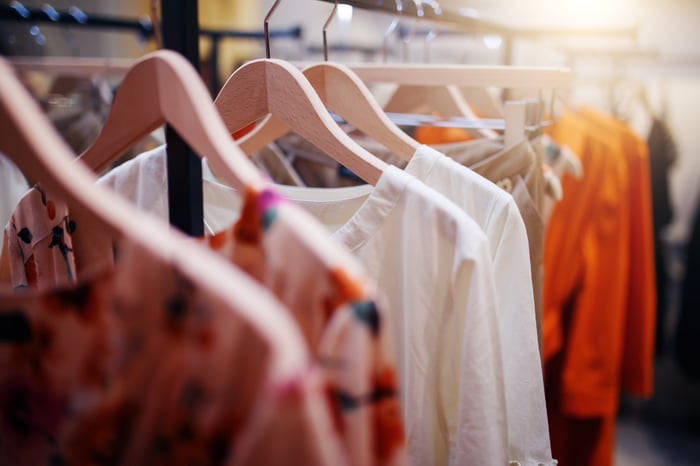 The (fake) elephant in the room

In the online resale market, The RealReal competes with ThredUp and Poshmark, though The RealReal is the only one to focus exclusively on luxury goods. Poshmark recently postponed a planned initial public offering until next year, leaving The RealReal as the only one of the three that is publicly traded. While the three resellers assure customers on their websites that they authenticate luxury goods, The RealReal set itself apart by making the "no fakes on our site" promise and offering extensive information about its authentication process, including a video and "meet our experts" section.

On its website, The RealReal notes that its team of experts examines all goods for brand markings, date codes, serial tags, and hologram stickers. All verification is done independently of the brands involved. But considering the size of the counterfeiting market and the increasing quality of fakes, The RealReal's "no fakes" statement might have been overly optimistic.

Of course, neither investors nor the company should endorse the sales of fake goods, but everyone has to accept the ever-present risk -- even if The RealReal makes every effort to optimize authentication. Chief executive officer Julie Wainwright told CNBC last week that the company continually adjusts its authentication process to stay ahead of counterfeiters, and the latest overhaul will result in a system that, by next year, won't resemble the one currently in place.

The fact that The RealReal's authentication process has been forced into the spotlight may be good news. In this business, the counterfeit threat is like the elephant in the room -- the problem everyone knows is there, but no one really wants to address. In this case, The RealReal is not just acknowledging the counterfeit problem but openly talking about it, and given the recent very public focus on the company's authentication process, the issue is likely to remain a priority.

Luxuriating in a positive outlook

Investors in The RealReal, or those considering buying shares, can find some serenity in the company's earnings, which surpassed estimates in the two quarters since its market debut in May -- including a 55% third-quarter increase in total revenue year over year, to $80.5 million. Active buyers increased by 43% over the past year, and in that time period, the average order value rose by 5%.

The RealReal offered further positive news going forward, with management now expecting 2019 gross merchandise volume to reach $997 million to $1 billion, higher than its earlier expectations of $974 million to $988 million. It also expects a slight improvement in EBITDA margin, predicting a loss of 23% to 24% versus earlier guidance of 24% to 25%.

As for demand, research from management consultant Bain & Co showed that online luxury shopping was up 22% last year, to nearly $30 billion, and the secondhand market for luxury goods totaled $24 billion.

Shares of The RealReal stand to benefit from a dynamic market, growing earnings, and a renewed focus on authentication. Unfortunately, the counterfeit risk is likely here to stay for luxury-goods companies. It's how a company manages the risk that's key, and The RealReal's leaders seem confident. Now, all eyes will be on the company to see whether it can deliver.