Sales during the third quarter dropped 4% from the prior year, to $2.68 billion, lower than analysts' estimates calling for $2.69 billion. L Brands also lost a staggering $252 million, or $0.91 per share, but when adjusted for large one-time items, it earned $0.02 per share, which was in line with analysts' expectations. 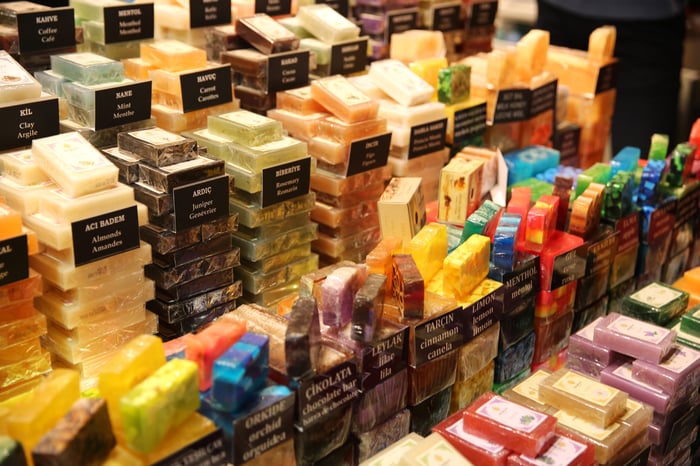 L Brands' comparable sales were down 2% overall, but it was a night-and-day story between Victoria's Secret and Bath & Body Works. Victoria's Secret's third-quarter comparable sales were down 7%, while Bath & Body Works mostly offset those losses with a 9% gain. One aspect of the third-quarter report that investors could be optimistic about was fourth-quarter profit guidance of $2 per share, which was better than consensus estimates.

One of the biggest takeaways for investors reading about the third quarter and Thursday's pop in stock price is to look at a slightly bigger picture. Keep in mind that L Brands traded roughly 7% lower during Wednesday's trading session heading into the quarterly report, and after initially climbing almost 13% on Thursday morning, the stock has already settled back down for a more modest 5% gain. It's also down 35% year to date, 80% over the past five years, and faces plenty of headwinds with its brick-and-mortar stores as well as broader retail weakness -- it's not an easy environment to navigate.

Lastly, investors will also want to stay aware of speculation that activist pressure could be heating up for L Brands CEO Les Wexner, which could be another reason shares moved higher on Thursday. The pressure would likely be from two angles: one being his former ties with Jeffrey Epstein, and because Victoria's Secret and Bath & Body Works appear to be heading in opposite directions and could be more valuable to investors if separated.