Few sectors in the US economy are as competitive as wireless telecom. Main Streets and shopping malls across the nation are dotted with retail mobile phone outlets. The internet has made phone plan pricing fully transparent and consumers extremely knowledgeable. At the same time, commodification is rife, and services offered by the major carriers are virtually identical. But T-Mobile (NASDAQ:TMUS) continues to gain ground no matter how tough the competition.

Record results with even better numbers on horizon 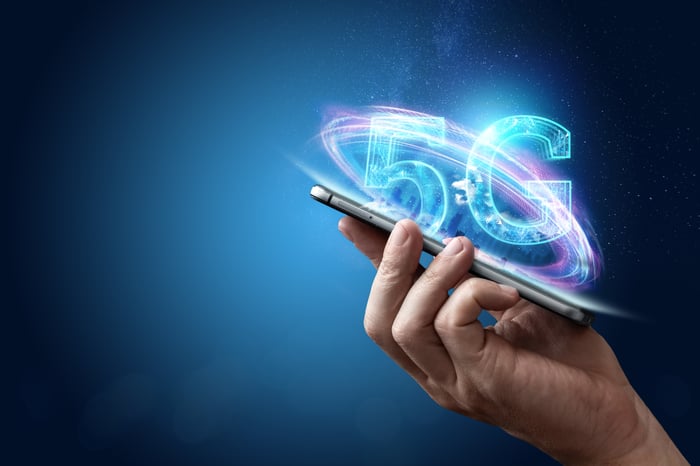 On top of announcing whopping results, T-Mobile is set to rapidly expand subscriber numbers, as the proposed merger with Sprint (NYSE:S) received approval from the U.S. Department of Justice last month. According to Legere, the merger will eventually generate $43 billion in synergies. With their 5G capability expected to go live next month, it's no surprise that analysts consensus ranks T-Mobile as a strong buy.

Underlying financials for T-Mobile are undoubtedly strong – even after spending billions to prepare for the launch of 5G technology and fighting for market share in a very tough market.. For Q3, EBITDA of $3.4 billion, up 5% year-over-year, was a record high, and net income of $870 million was up 9% over the last year. The company delivered these results despite a period characterized by a brutal price war among the major carriers. Operating cash flow was $1.7 billion, up 91% year-over-year. Cash flow growth indicates that the T-Mobile can continue to win in the market and aggressively invest in building out its new 5G network, which is already live in 8,300 cities and towns, 48 states, and Puerto Rico.

The US wireless market is slowly turning into an oligopoly, which is why T-Mobile's merger with Sprint is still under scrutiny by several state attorneys general. Post-merger, T-Mobile, along with Verizon (NYSE:VZ) and AT&T (NYSE:T), will control nearly 98% of the market, which will soon hit over $200 billion in annual revenues.

No one is more motivated to close the merger quickly and deposit the check from T-Mobile than Sprint shareholders. Tokyo-based Softbank Group (OTC:SFTBF), which holds 72% of Sprint, is bleeding cash. After the emergency bailout of WeWork, SoftBank now holds an $18.5 billion exposure to the struggling office leasing giant. In short, SoftBank is itching to pocket the $26.5 billion they will receive after the T-Mobile – Sprint merger eventually closes.

The merged company will be a goliath and well able to slug it out with the other Big Three carriers. With over $40 billion already invested in building out a national 5G network, T-Mobile will increase its network transmission capacity by 14 times. Given the substantial capital expenditures required to compete successfully in the market, size does matter. T-Mobile, after the proposed merger, will emerge as the nation's second-largest carrier in terms of subscriber numbers. By then, T-Mobile will start to challenge the largest carrier, Verizon, as the market slowly moves to the 5G network.

All systems go for 5G launch in December

T-Mobile should become a formidable competitor for Verizon's number one spot. For one, T-Mobile is scheduled to be the first carrier to offer 5G mobile service nationwide. On December 6th, when T-Mobile launches its first line of 5G compatible smartphones, it will cover 200 million people, amounting to over 60% of the US population. Even Apple, well known to attract the most tech-savvy and fashion-conscious consumers, will not roll out 5G compatible IPhones until later in 2020.

Its first mover advantage in 5G capability should give T-Mobile a competitive edge in a tough market to win new subscribers. "T-Mobile's nationwide 5G will be able to cover more people in more places and work indoors and out, unlike Verizon and AT&T's current 5G networks, which can be blocked by things like walls, glass, and leaves," John Legere stated in his recent third-quarter earnings call.

Further, T-Mobile has the most loyal client-base. Its churn rate, or share of subscribers canceling service, is rock bottom at 1.04%-beating both AT&T and Verizon. Building customer loyalty in a highly competitive market has been a key priority for Legere, who has targeted the growing ranks of disgruntled subscribers of competing carriers as low hanging fruit for T-Mobile revenue growth. The sticky client base for T-Mobile will enable them to exert a degree of pricing power – an utterly essential capability in a tough market that swings from one price war to another.

With near term closure of the merger with Sprint finally in sight, investor interest in the T-Mobile story should start to gain momentum. Already, analysts' price tragets on T-Mobile range from the $93 to $103 range. With the announcement that Legere will step down next May to be replaced by the current Chief Operating Officer Mike Sievert, the stock price softened a bit. That said, Legere will leave being a rock-solid platform for future revenue growth, the most robust 5G network in the nation, and the most loyal subscriber base. These factors, along with the closing of the Sprint merger, should drive T-Mobile stock price well beyond the $93 low-end price target.