Please ensure Javascript is enabled for purposes of website accessibility
Free Article Join Over 1 Million Premium Members And Get More In-Depth Stock Guidance and Research
By Evan Niu, CFA - Nov 22, 2019 at 7:00AM

Khosrowshahi appears to have bought shares through a private transaction from Uber co-founder Garrett Camp.

With shares trading near all-time lows, Uber ( UBER -2.02% ) CEO Dara Khosrowshahi apparently figured he'd take advantage of the depressed prices. In a regulatory filing this week, Khosrowshahi disclosed that he scooped up 250,000 shares at a price of $26.75. The trade took place on Monday, Nov. 18, and the price is very close to the $25.58 record low.

The chief executive now directly holds a little over 1.53 million shares, which does not include unvested equity-based compensation that Khosrowshahi has received. Uber paid its CEO $45.3 million in total compensation in 2018, which included $40.1 million in stock awards. 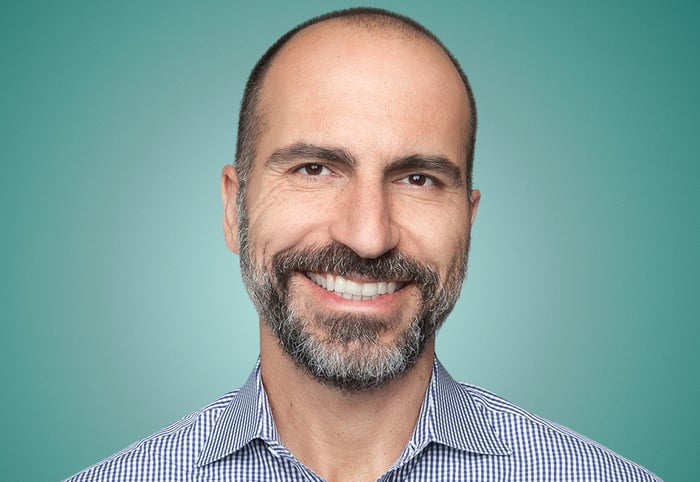 Buying from a co-founder

The news sent Uber shares higher because it represents a major vote of confidence from Khosrowshahi. It appears that Khosrowshahi may have purchased the shares in a private transaction with Uber co-founder Garrett Camp.

In a separate filing, Camp disclosed that he sold 250,000 shares for $26.75 on the same date. Camp, who still serves on the tech company's board of directors, now indirectly holds 80.8 million shares through various trusts and other legal entities. The transaction codes correspond to either open market or private purchases and sales. Neither Form 4 document indicates that the transaction price was an average, which is usually notated for open market purchases that are filled at various prices.

Open market purchases generally boost investor confidence since the insider is dipping into their personal pocket to invest more, as opposed to receiving shares as compensation. For all intents and purposes, a private purchase of shares sends the same signal to investors.

In Uber's short life thus far as a public company, there have only been two insider purchases of this nature. Chairman of the board Ronald Sugar bought 35,000 shares at a weighted average price of $27.20 earlier this month. That $952,000 transaction seems to be an open market purchase, as it was completed in multiple transactions ranging from $27.15 to $27.25, according to regulatory filings. Khosrowshahi's purchase dwarfs Sugar's investment.

The insider investment comes just a few weeks after Uber set a timeline to become profitable on an adjusted EBITDA basis. Uber is forecasting that it can generate positive adjusted EBITDA for full-year 2021 as the company continues to grow and scale while working to improve the unit economics in its core ridesharing business.

Analysts and investors expressed some skepticism around that goal, and shares had dropped because investors were preoccupied with Uber's $1.1 billion operating loss in the third quarter and management failed to provide many detailed specifics on how it would become profitable.

It seems Khosrowshahi doesn't share those concerns, and is betting $6.7 million on the company's future.