Electric-car maker Tesla's (NASDAQ:TSLA) highly anticipated fully electric pickup truck was finally unveiled on Thursday. Leading up to the unveiling, CEO Elon Musk had hinted that the new vehicle may not appeal to those looking for a traditional truck design. Based on the media's and the market's initial reaction to the unveiling, he was right. But is the truck's design too radical? Shares sank 6% on the trading day following the event as analysts expressed concerns that the vehicle wouldn't appeal to a mass audience.

Tesla's Cybertruck is priced to sell, particularly given its strong specs. But its style is polarizing. The truck features an out-of-this-world angular design that is unlike anything seen before. 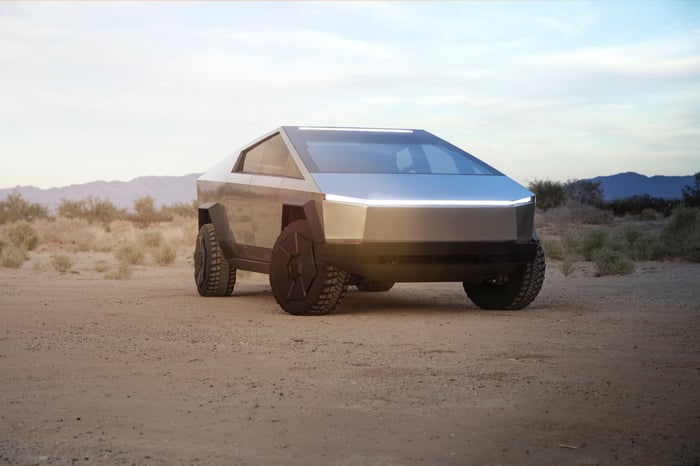 The truck will start at a price of $39,900 -- about $10,000 lower than expected. But versions with more powerful batteries and improved performance will be available for $49,900 and $69,900. The company's driver-assist technology, Autopilot, will come standard on the vehicle.

As has become expected of Tesla, the vehicle's performance specifications are impressive. With a zero-to-sixty acceleration time as fast as 2.9 seconds, up to 500 miles of range, and towing capacity of more than 14,000 pounds for the priciest version of the truck, Tesla didn't skimp on performance.

As far as the Cybertruck's exterior, Tesla boasted about its durability. "Starting with a nearly impenetrable exoskeleton, every component is designed for superior strength and endurance, from Ultra-Hard 30X Cold-Rolled stainless-steel structural skin to Tesla armor glass," the company says on its website.

While the vehicle's steel lived up to the hype during a demonstration at the unveiling event, the Tesla armor glass apparently still needs some work. The driver's side window shattered when Tesla tried to demonstrate its durability by throwing a steel ball at it. Hoping this wouldn't be the case with the rear window, a Tesla executive tried throwing the ball at the rear passenger window and the same thing happened. "Guess we have some improvements to make before production haha," Musk said in a tweet about the glass following the event.

Thanks to a front trunk and a 6.5-foot truck bed with diagonal retractable encasing, the Cybertruck impressively boasts 100 cubic feet of exterior, plus lockable storage. 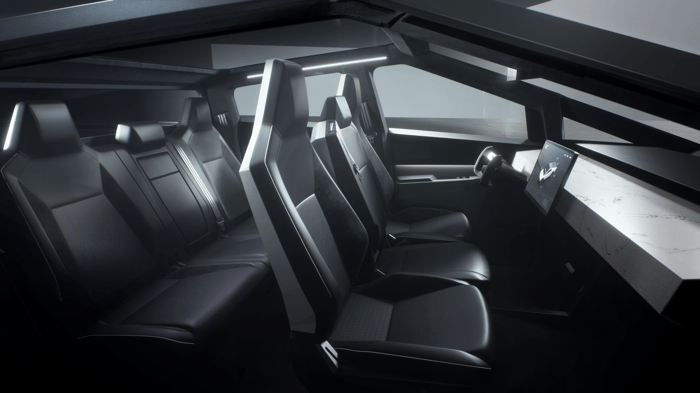 The truck's interior doesn't disappoint, either, seating six adults comfortably, according to Tesla.

Of course, the vehicle features Tesla's signature barbaric, minimalistic design and a 17-inch touch display where drivers and passengers interact with the vehicle.

For the most part, Tesla exceeded expectations when it comes to utility, performance, and specs. But the design is raising eyebrows.