Shares of Tesla (NASDAQ:TSLA) were trading sharply lower on Friday morning after the Thursday-night reveal of the company's Cybertruck pickup fell short of expectations.

But CEO Elon Musk had other plans. 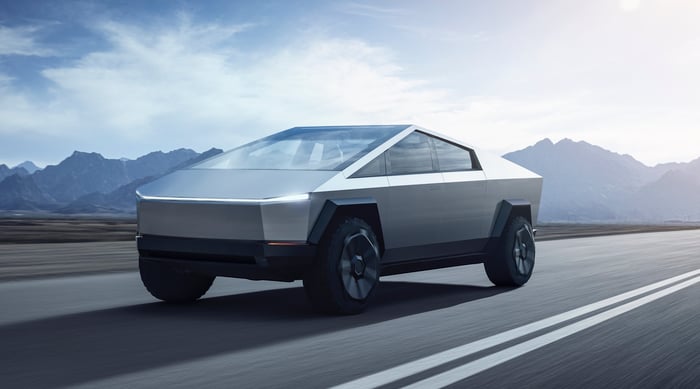 To say the least, Tesla's Cybertruck doesn't look like anything else on the road. Image source: Tesla, Inc.

As you can see, Tesla's Cybertruck is a jarringly angular stainless-steel-bodied behemoth that looks like it escaped from the set of a dystopian sci-fi film. While the claims for range and towing capacity and so forth are impressive -- as one would expect from Tesla -- the design of the Cybertruck and its decidedly oddball features suggest strongly that it will be a niche product at best -- and that much development work remains to be done.

At least in its current form, it's not a truck for truck buyers. That means it's unlikely to sell in anything like Detroit-pickup volumes, and investors appear to be adjusting their expectations accordingly.

Customers can reserve a Cybertruck with a deposit of just $100, a hint that Tesla might be hoping to rack up strong reservation numbers. Good early numbers might impress investors, but take note: Tesla's site warns that the first deliveries won't happen until late 2021 at the earliest, and GM and Ford are both expected to have battery-electric pickups on sale by then.

It's far too early to even guess how the competition will shape up, but -- at least right now -- auto investors seem to think that Tesla missed an opportunity.