Buffett's opinion of airline stocks has changed dramatically in recent years. Has the pivot paid off?

Warren Buffett once avoided owning airline stocks, famously writing in 2007 that "if a farsighted capitalist had been present at Kitty Hawk, he would have done his successors a huge favor by shooting Orville down."

But the airline business has changed in recent years, and so too has Buffett's opinion of the sector. Beginning in 2016, Buffett's Berkshire Hathaway ( BRK.A -0.29% ) ( BRK.B -0.61% ) began buying a basket of airline stocks, including shares of Delta Air Lines ( DAL -7.38% ), one of a handful of major carriers to survive a round of bankruptcies and consolidation that helped stabilize the industry and improve its profitability. Was the Oracle of Omaha correct to change course and climb aboard Delta, or would he have been better off spending the money on a time machine to try to head back to 1903 Kitty Hawk with a bazooka? Here's a look at how Berkshire Hathaway's investment in Delta has done.

First, some caveats. We don't know the exact days Berkshire Hathaway bought most of its Delta shares, or what specific price it paid for each share. But Berkshire files quarterly statements with regulators disclosing its holdings, giving us a rough idea of when shares were bought and sold and an average price paid. These are back-of-the-envelope calculations, and not precise enough to send to the IRS, but should be close.

In total, according to a recent filing, Berkshire Hathaway owns about 70.9 million shares of Delta Air Lines, having spent nearly $3.1 billion to buy the shares. Based on Delta's Nov. 14 closing price of $56.55 per share, the Delta stake is now worth just over $4 billion, a gain of almost 30%. 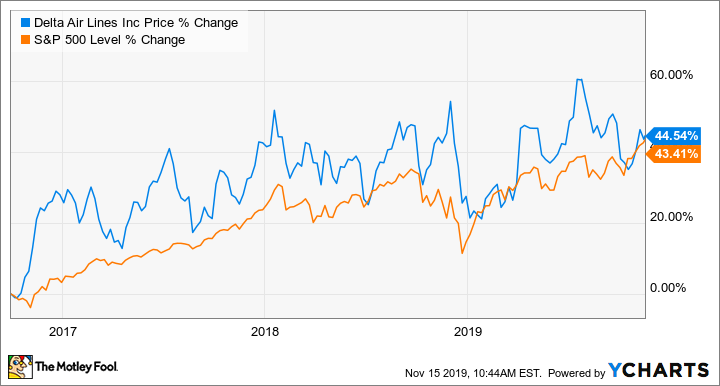 DAL vs. S&P 500 since Berkshire started buying in data by YCharts

The actual return is significantly higher. Delta pays a quarterly dividend that has been going up steadily over the years, from $0.2025 per share in December 2016 after Berkshire first bought in to $0.4025 per share now. Multiply that payout by the amount of shares Berkshire owned at each quarterly interval when dividends were paid, and Berkshire Hathaway has earned more than $230 million in cash on its investment, a total return of more than 35%.

Based on Buffett's commentary, it does not appear Berkshire Hathaway reinvests those dividends in additional shares.

What does Buffett see in Delta?

Over the past decade, Delta has been the driving force behind much of the change in the U.S. aviation market that helped soften Warren Buffett's stance on the industry. The airline was among the first to reorganize in bankruptcy in the years following the attacks of Sept. 11, emerging with an improved balance sheet it used to kick off a round of consolidation by acquiring Northwest Airlines in 2008.

The airline has moved aggressively to revamp its pricing strategy to better compete with Southwest Airlines and other discounters that since the early 1980s have been eating into domestic market share and profitability. Delta introduced low fares aimed at price-sensitive flyers while at the same time increasing revenue from less price-sensitive business travelers by charging for upgrades and other ticket add-ons. Today Delta generates nearly half of its revenue from products other than main cabin tickets, up from a historical average of less than 30%.

Delta is also among the most inventive of the airlines. The company in 2012 responded to concerns that jet fuel scarcity in the northeast U.S. would lead to higher prices by buying and operating a refinery in the region. The airline has also aggressively sought to lock up foreign partners and ensure its business travelers seamless travel throughout the world by taking equity stakes in airlines including Aeromexico, China Eastern Airlines, Virgin Atlantic, and LATAM Airlines Group.

What's next for Berkshire's Delta stake?

In early 2019 market watchers began speculating that Berkshire Hathaway could be interested in buying an airline outright and operating it as a wholly owned subsidiary. Some see parallels to Buffett's interest in railroads last decade, with Berkshire initially making investments in a handful of companies before deciding to acquire BNSF Railway Co. for $44 billion in 2010. Berkshire also owns NetJets, which provides business jet service to executives, and it knows the aerospace supply chain through its ownership of Precision Castparts.

Berkshire Hathaway has more than $100 billion in cash on hand, and Buffett has made it no secret he'd love to use it to buy companies. And he is clearly happy with his investment in Delta. The investor earlier this year went against his usual pattern by allowing Berkshire Hathaway's Delta position to grow to more than 10% ownership. The investor in his usual colorful language told CNBC that breaking the 10% threshold was initially an oversight, but once it happened, he figured that there wasn't any longer any reason not to further increase his stake in the airline.

Still, I wouldn't bet on a Berkshire Hathaway acquisition of Delta or any other airline. While Buffett's opinion on the industry has obviously changed, he's still aware of the issues the industry has faced, and I believe would likely want to see how the industry weathers an economic downturn before considering bringing an airline in-house.

In Delta, Buffett has an investment in a well-managed, growing company that currently pays a 2.8% dividend yield. My bet is that Buffett leaves well enough alone and continues to allow Delta to fly on its current path.