Up as much as 3.6% on Thursday following the release of third-quarter numbers, Walmart shares fell back into the red the very same day and have lost even more ground since. Investors, with time to think about it, are indeed concerned about the expansion of the company's e-commerce effort. They're also concerned about the expanding role food plays in its growth. Groceries may be a reliable business to be in, but the highly competitive food market keeps profit margins to a minimum. Ditto within the online marketplace of non-food goods.

Growing grocery sales and more e-commerce aren't necessarily margin-gouging liabilities though, if the organization responds the right way. A handful of tasks should be on McMillon's must-do list.

Growth, but at a cost

Most U.S. consumers -- or investors, for that matter -- may not realize food now makes up more than half of the organization's total U.S. revenue, accounting for 56% of its nationwide sales. It's an even bigger share than at industry icon Kroger. 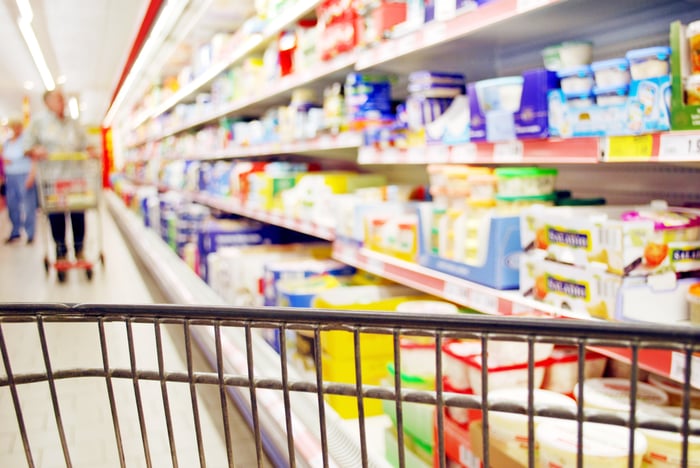 The shift hasn't been matched by income growth though. Sales improved 2.5% during the third quarter, but the cost of sales grew 3%. For the first nine months of the year, worldwide revenue is up 1.8%, while the cost of sales is up 2.3%. Its cost of sales, in fact, has been measurably outpacing revenue growth for over a year -- a trend that arguably started to take shape in earnest a couple of years ago.

It's difficult to determine how much of that disparity is attributable to the shift toward more groceries and more online sales. But, inasmuch as three-fourths the company's sales are generated within the United States, coming to such a conclusion isn't a stretch. Underscoring such a conclusion is the calculated comment from McMillon accompanying last quarter's results: "Our strength is being driven by food, which is good, but we need even more progress on Walmart.com with general merchandise. We're mixing the business out better to achieve better margin rates, but there is more work to do."

A handful of retail experts have identified some specific actions the retailer would be wise to consider.

"Having a strong grocery business is not a problem: it is an advantage," GlobalData's managing director told RetailWire. He goes on to explain: "Grocery drives footfall, cash-flow and is a category that everyone needs to purchase. ... What Walmart now needs to do is keep grocery moving, but bolster online non-food sales."

That's easier said than done, but it is possible. Walmart may need to borrow a page from the Amazon.com playbook and leverage what should be a growing amount of data about its customers.

One of the most frequent recommendations offered up as a way of restoring margins, however, was a ramped-up private-label operation. "For general merchandise, they should take a page from Target's playbook and create stronger private label brands. These will have better margins and create another reason to shop," said Incisiv's chief customer officer, David Weinand. Merchandising Metrics' founding partner Jeff Sward agrees, telling RetailWire, "Walmart could also benefit from their own version of Kirkland," which is Costco's highly successful in-house food brand.

Finally, one of the common themes among Walmart's best next steps is a more thoughtful approach in selecting and presenting non-grocery goods. Sward adds:

Walmart has an 'SOS' problem. 'Stuff On Sale.' And it's not that it's bad stuff or bad value. It's just presented as stuff. Seas of racks. No storytelling. Walmart is a very unemotional environment to shop in. And that worked fine for a long time. But now I think the bar is set a little higher.

He believes the retailer has "an opportunity to trade up and attract department store customers. If department stores can't solve their SOS problem, Walmart can take a shot and win on price/value."

Only time will tell how, or if, the world's biggest brick-and-mortar retailer moves in the direction several industry watchers have suggested. But their advice certainly seems sound and would likely establish the underpinnings for margin growth again.

Still, although it's bound to be a long-term project, investors wouldn't be out of line to begin looking for the beginning of these strategic shift now. It seems unlikely McMillon will widen profitability without taking the initial, deliberate steps down these prescribed paths sooner rather than later.