Please ensure Javascript is enabled for purposes of website accessibility
Free Article Join Over 1 Million Premium Members And Get More In-Depth Stock Guidance and Research
By Keith Speights - Nov 24, 2019 at 9:00AM

These stocks are in the right place at the right time.

Many things we spend on our money on are wants rather than needs. We could live without cars, smartphones, and streaming services if we had to. But what about healthcare? It's a need.

What's more, demand for healthcare-related products and services is growing. An increasing senior population in the U.S. and elsewhere guarantees that the growth in healthcare will accelerate rather than slow down.

Where there's a market for products and services that people must have and that is assured of generating strong growth, there's an opportunity for investors. That's certainly the case with healthcare stocks. Here are three top healthcare stocks you can buy right now, ranked by descending market cap. 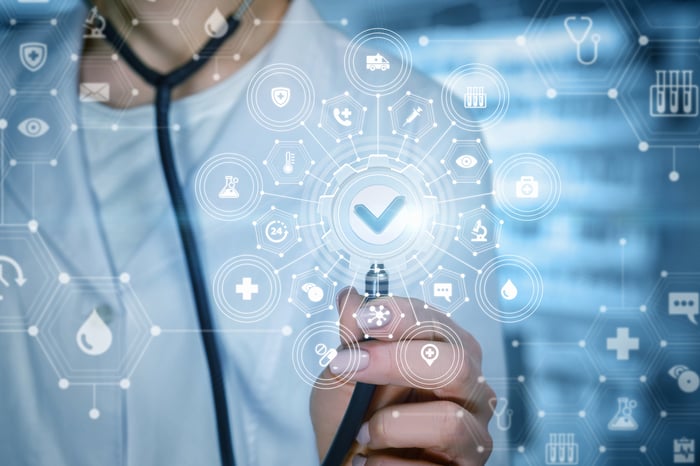 Robotically assisted surgery has become commonplace in the U.S. thanks to Intuitive Surgical ( ISRG -3.11% ). The company's da Vinci robotic surgical systems are used routinely for multiple procedures, including hysterectomies, prostatectomies, and more.

Intuitive Surgical is a great example of the old razor-and-blade business model applied to healthcare technology. The company makes money selling its robotic surgical systems on the front end but makes a lot more money over time selling replacement instruments and accessories. Over 70% of Intuitive's revenue comes from these recurring sources in addition to operating leases and services.

The company should enjoy excellent growth prospects as more surgeries are performed using its systems. As individuals age, they're more likely to require the types of procedures for which da Vinci is ideally suited. In addition, Intuitive Surgical continues to improve the capabilities of its robotic systems and expand the procedures for which robotically assisted surgery is applicable.

For a long time, Intuitive Surgical claimed a monopoly in its market. Competition is heating up, though, with medical-device giant Medtronic planning to soon launch a surgical robot system that will challenge da Vinci. Intuitive Surgical has a big head start, however, and its track record will be hard to beat. Even if rivals are successful, the overall robotic surgical systems market should grow enough for Intuitive to keep up its winning ways for a long time to come.

Speaking of monopolies, Vertex Pharmaceuticals ( VRTX -1.67% ) definitely has one in treating cystic fibrosis (CF). There are only four drugs in the world that have been approved to treat the underlying genetic cause of CF, and Vertex developed and markets all of them.

Several of Vertex's CF drugs have been approved for a while but haven't been available to patients in several major countries while reimbursement deals were negotiated. The good news for Vertex is that in recent months it has secured important reimbursement agreements with Australia, England, France, Scotland, and Spain.

While these reimbursement deals will boost Vertex's revenue, the biotech's newest CF drug should blow its market wide open. Trikafta won FDA approval several months earlier than expected and holds the potential to increase Vertex's addressable patient population by more than 50% if it wins regulatory approvals in other key markets as expected.

Vertex is also developing drugs to treat other diseases. It recently announced promising progress from phase 1 clinical studies conducted with its partner CRISPR Therapeutics for a gene-editing therapy that could potentially cure rare blood diseases beta-thalassemia and sickle cell disease. Vertex's pipeline includes several other clinical programs targeting other rare diseases as well as pain. The biotech's September acquisition of Semma Therapeutics could even lead to the development of a cure for type 1 diabetes. All of this makes Vertex the best biotech stock of all, in my view.

Guardant Health ( GH 1.17% ) is by far the smallest of these three top healthcare stocks with its market cap around $7.4 billion. However, it arguably has the most room to grow over the next few years.

The company is a leader in developing liquid biopsies, blood tests that detect cancer by finding fragments of DNA that break off from tumor cells. Guardant Health believes that there's a $50 billion annual opportunity for liquid biopsies in the U.S. alone. Some experts project the global market for liquid biopsies could top $100 billion.

Guardant Health's sales are soaring due to the surging popularity of its Guardant360 and GuardantOmni liquid biopsy products. In the third quarter, the company's revenue skyrocketed 183% year over year to nearly $61 million. Guardant Health expects its full-year 2019 revenue to will be nearly 126% higher year over year.

There are two reasons that the future for Guardant Health could be even brighter. The company awaits clearance from the U.S. Food and Drug Administration (FDA) for its Guardant360 product used in clinical testing of cancer patients. It also has launched a major study that could lead to FDA approval of its LUNAR-2 blood test for screening colorectal cancer.