Over 600,000 Americans died from cancer last year, according to the National Cancer Institute. More than 38% of men and women in the U.S. will likely be diagnosed with cancer sometime during their lifetimes. But both of these numbers could be dramatically reduced if there was a way to detect cancer much earlier than it's detected now.

This dream just might become a reality. Researchers across the world are scrambling to develop liquid biopsies -- blood tests that allow multiple types of cancer to be detected at very early stages. If successful, liquid biopsies could revolutionize cancer treatment for many patients. It also presents a huge opportunity for investors, with a potential annual market of $100 billion or more. 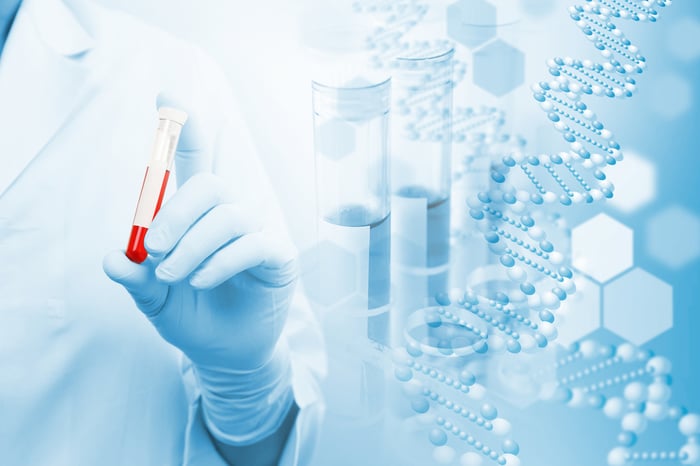 How could a simple blood test identify early-stage cancer? The key is in finding biomarkers -- substances in the blood or tissue that point to the presence of cancer.

Two primary biomarkers used in liquid biopsies are circulating tumor DNA (ctDNA) and circulating tumor cells (CTCs). The former are tiny fragments of DNA that break off from cancerous tumors, while the latter are intact tumor cells in the bloodstream that have separated from the tumor. CTCs aren't nearly as plentiful in the bloodstream as is ctDNA, so many efforts to develop liquid biopsies focus on analyzing ctDNA.

The idea is that a patient would have his or her blood drawn, perhaps during an annual checkup. The physician would send the blood to a lab, which would conduct a test to determine if any ctDNA or CTCs were present. The DNA from either biomarker found would then be sequenced -- a process where the order of the chemical building blocks (called bases or nucleotides) are determined. This DNA sequencing would identify genetic mutations and point to the specific type of cancer in the patient.

Armed with the results from the liquid biopsy, the patient's medical team would be able to determine the appropriate treatment plan. Early detection of cancer doesn't guarantee that treatment will be effective. But in many cases, it can dramatically improve the chances of survival. And with biopharmaceutical companies developing new drugs that target cancer caused by specific genetic mutations, the prospects for survival using these therapies in combination with liquid biopsies could greatly improve in the future.

Many teams across the world are developing liquid biopsies. Not all of them, however, are alternatives for investors.

Healthcare giant Roche (OTC:RHHBY) is also a key player in the liquid-biopsy world, thanks to its acquisition last year of Foundation Medicine. Roche already owned more than 50% of Foundation and grabbed the rest of the fast-rising diagnostics company as soon as it could.

Illumina (NASDAQ:ILMN) is involved in liquid biopsy in a couple of ways. The company's spin-off, GRAIL, was established solely to develop liquid biopsies for early-stage cancer detection. Illumina still owns a significant minority stake in GRAIL. Illumina's gene-sequencing technology is also used by GRAIL and other companies to analyze ctDNA in liquid biopsies.

Another key challenge is that ctDNA analyzed in a liquid biopsy might not be from a tumor. The DNA could come from bacteria, viruses, or even white blood cells. Pregnant women have DNA from their unborn babies in their bloodstream.

Even if biomarkers are found and cancer is detected at an early stage, there's the question of whether or not the specific type of cancer actually requires treatment. Len Lichtenfeld, deputy chief medical officer at the American Cancer Society, thinks this could be one of the biggest challenges of all with liquid biopsies.

And there's yet another peril for investors: There's not a good way to determine which player will be the biggest winner in the race to develop an effective liquid-biopsy test for detecting early-stage cancer. Betting on the wrong horse could be worse than not betting at all.

Because of all these risks, the best strategy for investing in liquid biopsies is probably to go with a stock that doesn't have its fortunes heavily dependent on success in this one area. Illumina looks like the best alternative. The company has multiple other avenues for growth. If GRAIL is successful, that would be the best scenario for Illumina. But even if another rival beats GRAIL, there's a good chance it will use Illumina's gene-sequencing technology.

There's no guarantee that liquid biopsy will become a $100 billion industry anytime soon. But if it does, Illumina stands a good chance at being one of the top winners.