Black Friday has stopped being a major event.

It used to mark the start of the holiday shopping season and a day where people would line up at stores to get one-time deals. That still happens in a much smaller way, but the overall importance of Black Friday has become diluted.

Traditionally, the Friday after Thanksgiving has been known as the day retailers move from a loss (being in the red) to a profit (in the black) for the year. That was always more anecdotal than hard truth, and in the modern holiday shopping season, Black Friday has become a broad term referring to deals more so than the specific day. 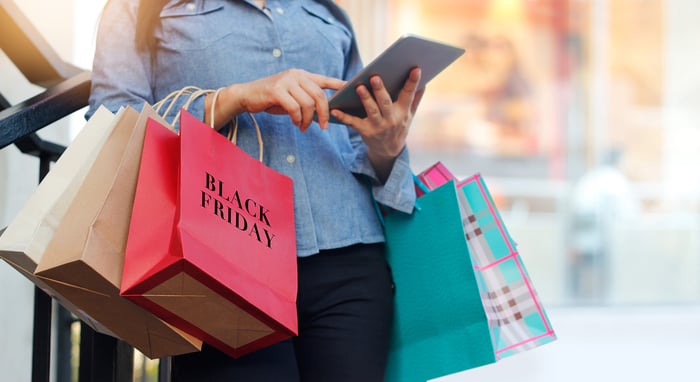 Black Friday is no longer the start of the holiday shopping season. Image source: Getty Images.

Holiday shopping deals now begin on Nov. 1. Most retailers label these sales as "Black Friday" deals even though they start well before Thanksgiving. Those early sales have sort of muddied the season, making it so consumers don't really know when to shop in order to get the best deals.

Black Friday itself will still have a lot of special deals and "doorbusters" designed to create shopping excitement. That still drives people to stores, but many retailers have also been opening on Thanksgiving Day itself, further taking attention away from Black Friday and making it less special.

In 2019, the sales on Thanksgiving, Black Friday, and Cyber Monday no longer tell the tale for the holiday season. You have to look at all of November and December to gauge whether the season has been a success.

As the calendar moves toward December, the National Retail Federation (NRF) expects sales for the last two months of the year to rise between 3.8% and 4.2% to a total between $727.9 billion and $730.7 billion. Those sales figures, which do not include automobile dealers, gas stations, or restaurants, are slightly ahead of the 3.7% average increase in sales over the past five years. Those are encouraging numbers given the current economic uncertainty created by political conditions.

There are many moving parts and lots of distractions that make predictions difficult. There is significant economic unease, but current economic data and the recent momentum of the economy show that we can expect a much stronger holiday season than last year. Job growth and higher wages mean there's more money in families' pockets, so we see both the willingness and ability to spend this holiday season.

Black Friday has faded in importance, but it's not irrelevant. Consumers still associate the Friday after Thanksgiving with shopping. They may be less driven to get up early in order to wait in line, but many shoppers will still visit retailers on that day.

While there are "Black Friday" deals going on now, there will still be added sales and special offers on the actual day. Black Friday isn't the day it once was, but it's still an important day for retailers and one when consumers expect big savings.

If you're buying holiday gifts, you no longer have to do it on Black Friday. You still can, though, and savvy shoppers will still save money by heading to the stores (or going online) on the day after Thanksgiving.