Please ensure Javascript is enabled for purposes of website accessibility
Free Article Join Over 1 Million Premium Members And Get More In-Depth Stock Guidance and Research
By Jon Younkman - Nov 25, 2019 at 10:00AM

Is the recent closing of the Red Hat acquisition reaccelerating Big Blue’s growth?

IBM ( IBM 1.66% ), also referred to as Big Blue, has struggled with revenue growth for more than five years. In Oct. 2018, IBM announced its acquisition of Red Hat for $34 billion -- IBM's largest acquisition in its 108-year history. And it didn't come cheap, with a price tag of almost 10x sales. Red Hat is the leading provider of hybrid cloud solutions, a rapidly growing sub-sector of the overall cloud industry.

The acquisition was meant to combine Red Hat's industry-leading position with IBM's incumbency and scale position to accelerate Red Hat's already explosive revenue growth, and hopefully help return IBM to top-line growth. The acquisition closed on July 9. Let's take a look at IBM's third-quarter results, the first quarter with a Red Hat contribution to see if its strategy is working.

Despite the partial quarter, IBM showed evidence that its strategy to accelerate Red Hat's growth is working. Revenue growth for Red Hat in the third quarter grew 20% year-over-year on a constant currency basis. This was an acceleration from its prior revenue growth run rate of 16%. However IBM's revenues declined 0.6% as Red Hat only accounts for about 6% of IBM's total. Thus, despite the size of the acquisition, Red Hat just isn't big enough to move the needle...yet. 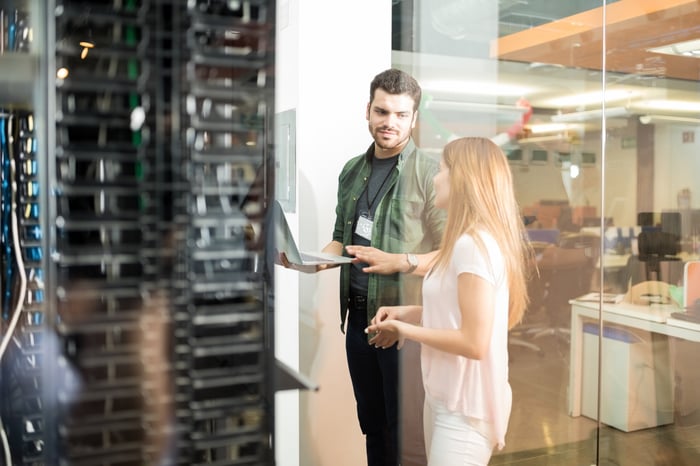 So far, the acquisition appears to be going well. IBM signed new clients, expanded existing client relationships, and employee attrition was stable year-over-year. IBM is also aggressively hiring new employees in its cloud business (about 1,000 in the last quarter alone).

The long-term potential is exciting. IBM believes the overall hybrid cloud market represents a $1.2 trillion opportunity. Currently about 10% of this market has converted to a hybrid cloud, and IBM expects 50% of the market to be converted by 2023. So IBM is clearly expecting rapid market growth over the next few years, and it is investing to capture this growth.

IBM's financials are strong and revenue growth should turn positive

IBM added $32.6 billion in net debt with its acquisition of Red Hat. With the Red Hat acquisition, total debt peaked $73 billion in early July. IBM paid down almost $7 billion in debt during the third quarter and net debt at the end of the quarter stood at $55 billion. IBM's goal is to return to a single-A credit rating within a couple of years. With share repurchases suspended and free cash flow after dividends of over $6 billion per year, that goal should be easily achievable.

IBM is guiding to mid-single-digit top-line growth over the next two years as it expects cloud growth to accelerate and a new product cycle in mainframes to kick-in. Profits are expected to grow at a faster clip in the high-single-digits, helped by the ultra-high gross margin Red Hat business, which is almost double IBM's corporate average. That earnings growth, combined with close to a 5% dividend yield, should give investors a total return in the low-teens over the next few years.

IBM currently trades around $135 per share and less than 11x forward earnings. However, if IBM's strategy starts to reaccelerate its top-line growth, IBM's price-to-earnings multiple could very well expand, generating substantially more upside for investors. Applying 14x to 15x next year's consensus earnings per share of $13.30 yields a price target pushing $200 per share, and total returns of over 40%. Perhaps IBM is worth a gamble after all.