One scary thing about penny stocks, or micro-caps, is that the companies are either too small to get traction or the companies used to be bigger, but markets have crushed the stocks. A penny stock is either a wannabe or a has-been. If you find the right stock, your returns will be incredible. You can get a 10-bagger or more since a micro-cap company that becomes a 10-bagger means the stock reached small-cap level.

Of course, biotech investing is also quite risky in and of itself. You're investing in scientific research that might not pay off. Novavax (NASDAQ:NVAX) and Inovio Pharmaceuticals (NASDAQ:INO) are two unprofitable biotechs. Both companies have minuscule revenues and no drugs for sale. That fits the profile of a lot of biotechs, including major ones with fairly large capitalizations.

If and when a biotech receives bad news, there can be a massive sell-off, and the stock gets hammered. If that happens enough times, the stock can fall all the way down to micro-cap status. Both Novavax and Inovio have had multiple failures in clinical trials. Failure is discouraging. People give up. And make no mistake, it is far more lucrative to invest in success than to invest in failure. On the other hand, if you learn from your failures -- and trial and error is a great teacher -- and you adapt, grow, and achieve the success that previously eluded you. 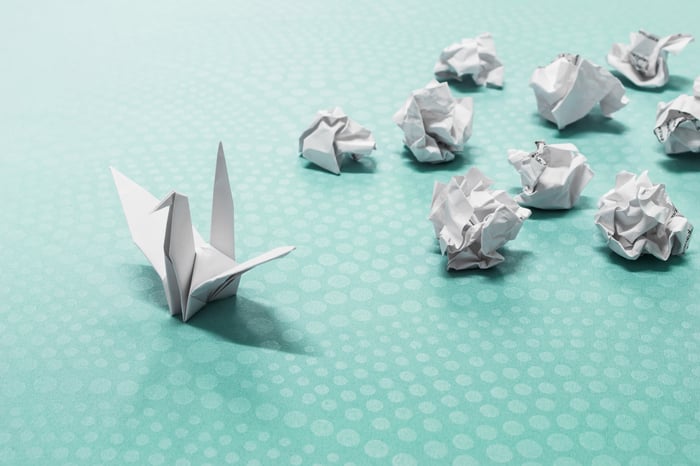 It's hard for investors to judge whether the scientists in the lab have learned anything from their mistakes or failures. The obvious markers of success -- revenues and profits -- are not there yet. So we might look to other markers of progress.

1. What's the status of the pipeline?

Novavax has a flu vaccine, NanoFlu, in phase 3 trials right now. The Food and Drug Administration gave this drug fast-track status. About 80,000 people died from the flu in the U.S. in the winter of 2017 to 2018, so the FDA is trying to get this drug through the pipeline as quickly as possible while ensuring the drug actually works.

In this pivotal trial, Novavax is competing against Sanofi, a $117 billion pharmaceutical giant and the market leader in flu vaccines. Novavax's drugs have been beating the pants off Sanofi's top vaccines, Fluzone and Fluzone High-Dose, in both phase 1 and phase 2 trials.   In its phase 3 trial, Novavax's NanoFlu is competing against yet another Sanofi flu vaccine, Fluzone Quadrivalent. So we can't assume that NanoFlu will continue its dominance over Sanofi since this is a different version of Fluzone. Novavax will release results from the trial in the first quarter of next year.

Inovio's phase 3 drug does not have fast-track status. VGX-3100 is designed for the treatment of precancers and cancers caused by the human papillomavirus (HPV). The phase 2 trial was successful, but it was also in 2015. That's a red flag since it's been four years and the trial has yet to start. The company reports that enrollment has finished, so hopefully, it will start testing next year.

Phase 3 trials cost money, sometimes a lot of money. Inovio is running two phase 3 trials for VGX-3100 for cervical cancer in women.  The first one is an 88-week trial. That would mean final results sometime in 2022. The other phase 3 trial is shorter (40 weeks), but the company is still recruiting patients for that one.

2. Are there financing deals with big pharma?

Another way to judge the viability of an unprofitable biotech is by whether the company has collaboration deals. These are wonderful to see because approval from an established company validates the science for investors who didn't major in science. Also, collaboration deals often bring in cash to biotechs that need it.

Inovio lists two collaboration deals on its website, one with AstraZeneca and one with Regeneron. In 2015, the AstraZeneca deal looked promising. Inovio sold the rights to its drug for $27.5 million upfront. Inovio also had the rights to future milestone payments, which could have gone as high as $700 million.

Unfortunately, the deal was scaled back by AstraZeneca earlier this year. Two of the drug trials were canceled outright. However, AstraZeneca is still testing MEDI0457 in combination with one of its cancer drugs. Inovio still has hopes of collecting some future payments.

What about the Regeneron deal? It's pretty bare-bones. Inovio has permission to use Regeneron's drug in a cocktail, but Inovio has to pay for the clinical trial, not Regeneron.

Novavax has no financing deals for the drugs in its pipeline.

3. What about cash and cash burn?

Novavax has $71 million in cash and $331 million in debt. Its pivotal phase 3 trial for the flu vaccine feels like a make-or-break situation for the company. If NanoFlu beats Sanofi's vaccine again, Novavax will have a very valuable drug on its hands.

On the other hand, Novavax's financial situation is precarious. A phase 3 failure for NanoFlu would probably doom the company. A successful read-out would mean quite the opposite. We will all know the results in a few short months.

Both of these unprofitable biotechs are highly risky. Novavax has a near-term catalyst and a very nice risk/reward ratio. It could conceivably have NanoFlu on the market for the 2020/2021 flu season. Inovio investors have much longer to wait.