Please ensure Javascript is enabled for purposes of website accessibility
Free Article Join Over 1 Million Premium Members And Get More In-Depth Stock Guidance and Research
By Keith Speights - Nov 26, 2019 at 10:00AM

The Canadian cannabis producer enjoyed a nice rebound -- but only a temporary one.

After Aurora Cannabis ( ACB -6.39% ) got clobbered for months on the market, the beleaguered Canadian marijuana stock bounced back last week. In fact, Aurora racked up big gains for several days in a row. Investors piled on, perhaps thinking that what they saw as a long-overdue rebound had finally arrived.

But then the rebound stopped in its tracks. Aurora's shares sank on Friday and floundered on Monday. Is this just a temporary pause, or is Aurora's surge really what's only temporary? Here's why Aurora Cannabis' surge from last week evaporated and what could happen next with the heavily followed marijuana stock. 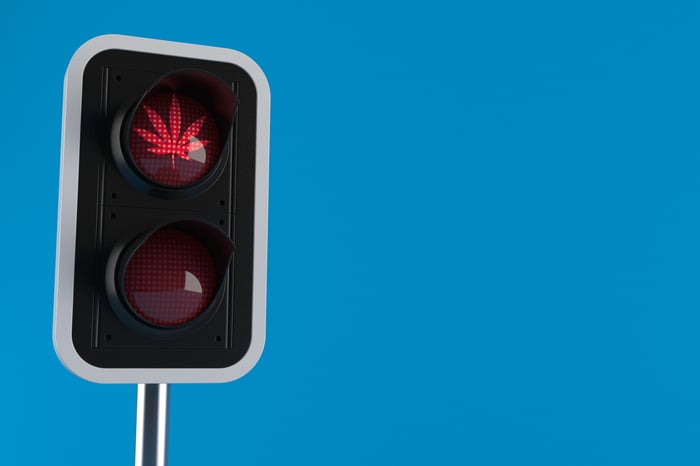 The main reason behind the rebound

Aurora wasn't the only Canadian marijuana stock that soared for several days last week. Nearly every cannabis-related stock enjoyed a big bump thanks to the U.S. House of Representatives Judiciary Committee's vote to pass proposed legislation that would legalize cannabis in the United States.

It's no exaggeration that this committee vote was a major milestone for the cannabis industry. While there have been other legislative votes that were beneficial to cannabis companies -- particularly the SAFE Banking Act the U.S. House of Representatives passed in September -- this marked the first official vote to actually legalize cannabis at the federal level.

With this context in mind, the nice gains by marijuana stocks last week make perfect sense. However, there's an even bigger context to understand that explains why those gains were short-lived.

The House Judiciary Committee vote was an important step, but only one of many needed to legalize marijuana in the United States. The full House must now vote on the proposed bill. That shouldn't be problematic, however. In fact, the legislation is expected to pass by a wide margin.

Assuming the full House approves the proposed legislation, it would then go to the U.S. Senate. The process in the Senate is similar to that of the House. The Senate Judiciary Committee must review and vote on the bill. If the committee approves, then the full Senate would have to approve and vote. There's always the possibility of differences in the details between Senate and House versions that would needed to be worked out. If both chambers resolve those differences and pass the bill, the president would have to sign it into law.

Now that we've covered the Schoolhouse Rock lesson on how a bill becomes a law, let's address the political reality of the proposed marijuana legalization bill: It possibly won't even be considered by the Senate Judiciary Committee and probably won't come before the full Senate for a vote.

Sen. Lindsay Graham (R.-S.C.) chairs the Senate Judiciary Committee and gets to decide which bills his committee reviews. Graham has opposed the legalization of recreational marijuana in the past. Sen. Mitch McConnell (R.-Ky.) is the Senate Majority Leader and determines which bills come before the full Senate. Although McConnell has been a champion for the hemp industry, he has opposed cannabis legalization.

Despite investors' initial excitement that Aurora and other Canadian cannabis producers could have a huge new market opportunity if marijuana is legalized in the U.S., the barriers to a legalization bill remain just as foreboding as they did before the House Judiciary Committee's vote last week. And that's primarily why Aurora's rebound fizzled.

There were some other factors that contributed to Aurora's bounce. Probably the most important one is the psychological component. After an extended period in which marijuana stocks got hammered, including Aurora, investors were looking for a reason -- any reason -- for optimism. As we just discussed, though, optimism that the Senate might pass the legislation that cleared the House Judiciary Committee last week could be unjustified.

Aurora also probably benefited when Bank of America analyst Christopher Carey upgraded Canopy Growth stock last week to a "buy" rating from a "neutral." This bullish opinion om Canopy probably made some investors think more positively about Aurora as well. The psychological factor of looking for a reason for optimism raises its head again.

One development last week focused solely on Aurora Cannabis. On Tuesday, the company announced that 94% of the holders of its $230 million (Canadian) worth of convertible debentures maturing in March 2020 have elected to accept an offer to convert the debentures into Aurora shares. That eliminates the need for Aurora to jump through hoops to raise enough cash to pay off the debentures. It's good news, but the company still has to dilute its stock by issuing new shares.

The main thing to expect with all Canadian marijuana stocks, including Aurora Cannabis, is volatility. Any hint of good news will likely send shares flying, while any bump will probably cause the stock to slide.

One potential catalyst that's coming up quickly is the initial shipments of cannabis derivative products in mid-December. Early reports related to consumer demand for these products will probably cause Aurora to soar or sink.

Aurora could also report on updates related to its efforts to secure a major partner. Executive Chairman Michael Singer recently stated that Aurora is talking with several consumer packaged-goods companies.

It also won't be very long before Aurora announces its next quarterly update. The company is taking some solid steps to reduce its spending. If its bottom line improves significantly and reinforces the impression that Aurora is on a clear path to profitability, the stock could enjoy a big jump yet again in February.