It's time for hungry restaurant investors to grab a slice of Papa John's (NASDAQ:PZZA) proverbial financial pie. What's so exciting about this U.S.-based pizza chain at the moment? It's a combination of a steady turnaround since the beginning of the year, positive financials in this month's earnings report, and management changes already starting to bear fruit.

Let's break it down. 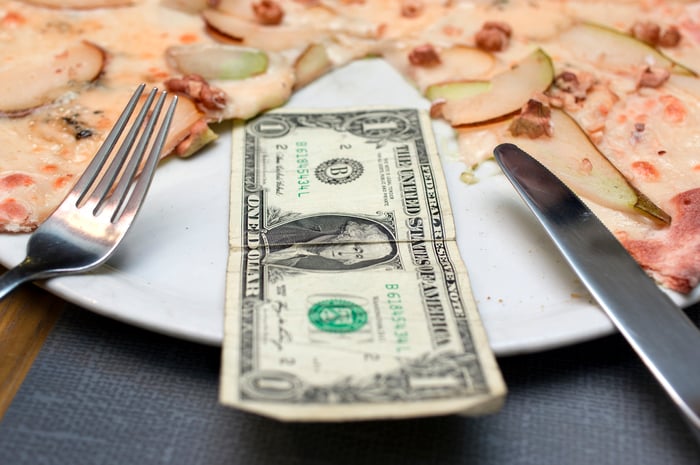 Up until the beginning of 2019, Papa John's stock had been on a steady tumble. In January 2017, the stock was trading at a little over $86 a share, just shy of its all-time peak. A year later, the stock had fallen to $56.29 a share, and at the beginning of 2019, it was trading at $39.64. These were good for yearly losses of 34.7% and 29%, respectively. The sizeable drop is largely credited to long-term fallout from the founder of Papa John's John Schnatter's use of a racial slur during a company phone call and the ensuing efforts to oust him from the company. However, things started to change this year. The stock rose to $59.64 at the end of October, an increase of just over 48% from the start of 2019 and a recoup of the previous year's damage.

But why should this upswing continue? The company's Nov. 6 earnings release offers some clues. When looking at growth numbers, you see nothing but turnarounds across the board. Here are some of the highlights compared to the same quarter last year.

Additionally, systemwide sales (total sales to customers from both franchise and company-owned stores) in North America were up 1%, the first positive quarter in the last two years, and total revenue is up 4.8% to $403.7 million.

While it's certainly easier to post improved numbers when you are coming off an awful year (thanks to the aforementioned issues with the Papa), the changes are significant enough to still be important. The company's efforts to fuel a turnaround are starting to bear fruit. As outlined in the most recent earnings report, the turnaround is a three-pronged approach.

A shake-up at the top

The third prong of the turnaround effort is a change in leadership. While the numbers mentioned above are exciting, this could be much more important. Papa John's replaced Steve Ritchie with Rob Lynch as the new CEO just two short months ago.

Rob Lynch is the former chief marketing officer of Arby's and is largely credited with the fast-food company's success of late. In 2015, Arby's saw an 8.1% increase in same-store sales, more than three times that of its competitors. The position Arby's was in seems strikingly similar to where Papa John's finds itself today -- a fragmented, locally driven model.

When asked how he corrected this at Arby's, Lynch said:

The structure of the business when I joined was indicative of the business at the time -- a fragmented, locally driven model. We had a local field-driven team and a local media team, with resources spread across different markets. We needed to bring together these resources and leverage our national footprint for media buying and agency spend. At the same time, we needed to create a testing and validation model that was less reactive to the opinions of company executives and more driven by our customers.

As the company is already spending on companywide marketing efforts, it looks like the new CEO is following the same recipe he used at Arby's. Personally, Rob Lynch's presence at Papa John's is enough to have me convinced the turnaround will continue. And the market agrees. On the day Lynch's hiring was announced, Papa John's stock spiked almost 10%.

Investors should be excited to see what bold moves the man behind the "We have the meats" campaign at Arby's will bring to the pizza kitchen.