There's an old adage in biotech -- raise capital when you can, not when you have to -- that Agios Pharmaceuticals (NASDAQ:AGIO) seems to have taken to heart. The biotech ended the third quarter with over $540 million in the bank, which it estimated would last through at least the end of 2020, but this month Agios closed on a secondary offering that added another $294 million to the biotech's coffers.

Agios has two drugs on the market -- Idhifa and Tibsovo -- that treat acute myeloid leukemia (AML), but they're both precision medicines that are designed to treat the subsets of patients with specific mutations, which has limited their potential. Agios also has to share Idhifa revenue with its development partner Celgene, which was recently purchased by Bristol-Myers Squibb (NYSE:BMY).

Third-quarter revenue was just $26 million, including $17.4 million from sales of Tibsovo and $8.2 million in collaboration and royalty revenue for Idhifa. With research and development costs topping $100 million, the two drugs aren't coming close to funding the pipeline and it's pretty clear why Agios was going to have to raise capital eventually. 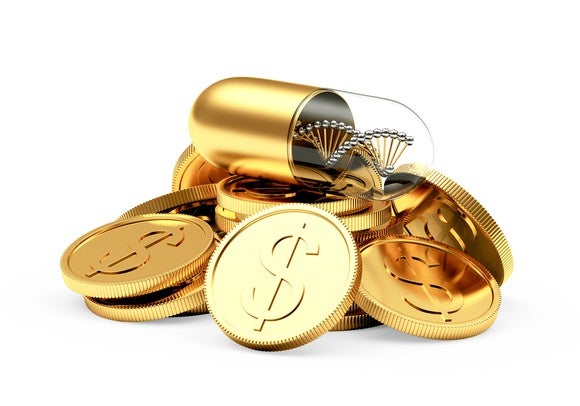 Agios is taking a two-pronged approach of expanding the use of its currently approved drugs and developing new ones to increasing sales so it can get eventually get into the black.

First up, Agios is looking to expand the use of Tibsovo by getting it approved to treat patients with cholangiocarcinoma, a form of cancer that starts in the bile ducts, which connect the liver and gallbladder to the small intestine. Agios presented data earlier this year from a late-stage clinical trial in patients with cholangiocarcinoma that showed Tibsovo reduced the risk of disease progression or death by 63% compared to placebo. The company plans to submit to the Food and Drug Administration before the end of the year, setting up an expanded approval next year.

Agios is also testing Idhifa and Tibsovo in newly diagnosed AML patients, which could increase the usage of the drugs over their current approvals for patients who have failed previous treatments.

On the pipeline side, Agios' lead candidate, mitapivat, is in late-stage development for a genetic disease called pyruvate kinase deficiency. The company hopes to complete enrollment in the studies shortly, and with the efficacy readouts coming after 24 weeks of optimized treatment, it could take about a year to know if the phase 3 trials were successful.

Vorasidenib, which targets the same cancer causing mutations that Idhifa and Tibsovo target, is about to enter a phase 3 clinical trial in glioma, a form of brain cancer. In a phase 1 study, 31% of patients who received vorasidenib responded to the treatment, which is a decent response rate for the hard-to-treat cancer.

Agios' market cap of $2.5 billion looks reasonable for a biotech company with Agios' potential. It's not hard to see Idhifa, Tibsovo, and mitapivat hitting $500 million in annual sales each, with vorasidenib offering further upside. At five times sales of $1.5 billion, the stock could triple from here if Agios can get the additional approvals required to boost sales to those levels.

The biggest issue, which ties into Agios' need to raise capital, is that it's going to take a while to get to that kind of revenue run rate. At this point, Agios might be best suited for a watch list and revisited toward the end of 2020 as the company approaches the release of the mitapivat phase 3 results.