No stranger to vast distribution partnerships, Disney (NYSE:DIS) laid the foundation for its blockbuster launch of Disney+ early on. The House of Mouse secured distribution deals with prominent smart TV manufacturers, online video streaming platforms, and even telecom giant Verizon. "It's a wholesale deal to us, so we will get paid for that," Disney CEO Bob Iger told CNBC last month regarding the Verizon promotion. "And they will also support us with a lot of marketing."

Disney is continuing its promotional onslaught, in this instance teaming up with Alphabet (NASDAQ:GOOG) (NASDAQ:GOOGL) subsidiary Google. 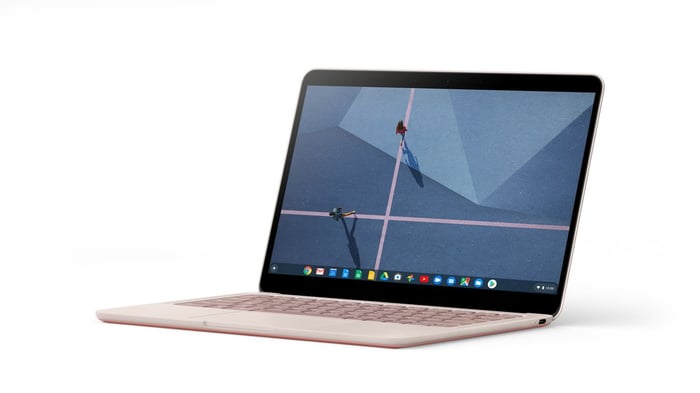 For a limited time, Chromebooks will come with three free months of Disney+. Image source: Google.

Google is now including three free months of Disney+ with the purchase of any new Chromebook between now and the end of January or "while supplies last." That language suggests that there are a limited number of subscriptions that Google is buying wholesale from the House of Mouse to give away as part of the offer.

Anyone who activates a new Chromebook can claim the deal through a promo code, which is valued at the retail price of approximately $21. Customers will still need to fork over payment credentials, as the service will automatically renew at the end of the promotional period at the retail rate of $7 per month unless they cancel.

At Google's fall hardware event last month, it announced a new Pixelbook Go that starts at $649, but there are plenty of more affordable Chromebooks available from other manufacturers.

While the Chromebook promotion isn't as generous as Verizon's -- which gives one year of free Disney+ service with unlimited data plans and 5G home internet plans and covered an estimated 20 million households -- the offer is another prominent partnership that adds to Disney's growing list of distributors.

Disney knows how important these types of partnerships are to growing Disney+. Before it had finalized details, Iger noted on the August earnings call that tech companies would play a crucial role:

At Investor Day, we announced that we had a few distribution partners [for Disney+]. There are others out there notably, Apple and Amazon and Google for instance that we've been in discussions with about distribution, you can expect that we will conclude deals with them as distribution partners. We think it's important for us to achieve scale relatively quickly and they will be an important part of that.

Amazon and Disney had disagreed over ad inventory sharing in any Disney app on its platform, according to The Wall Street Journal, but the companies were able to settle their differences. Iger announced the distribution deal with Amazon on the fiscal fourth-quarter earnings call just days before the Nov. 12 launch while declining to answer analyst questions about wholesale arrangements.

"We're getting paid a certain amount for [Verizon distribution], but I won't get into specifics regarding that," Iger said. With the details shrouded in secrecy, it's unclear if Google is paying the same wholesale rate.