Disney's (NYSE:DIS) flagship streaming service, Disney+, is off to a stellar start. The company announced 10 million sign-ups within the first day of launching the service in the United States, Canada, and the Netherlands. That strong showing made analysts reconsider their expectations for Disney's direct-to-consumer business.

In April, Disney said it expects to reach 60 million to 90 million global subscribers for Disney+ by the end of 2024. But after signing up 10 million subscribers so quickly, the market now seems to expect Disney to surpass those numbers by a wide margin. Bernstein analyst Todd Jeunger believes the change in Disney's stock price following the announcement suggests the market believes the company will have about 120 million subscribers by the end of its five-year planning horizon.

Indeed, Disney appears to have been fairly conservative with the outlook it provided at its analyst day in April. Here's what investors need to consider for Disney's direct-to-consumer growth potential. 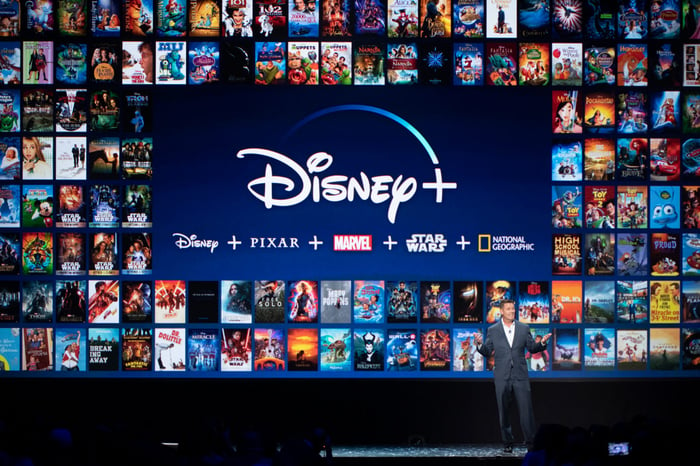 Disney should be able to mimic its successful launch in North America around the world thanks to its global brand. Unlike at the start of Netflix's (NASDAQ:NFLX) international expansion, for example, global audiences can identify Disney's brands. Netflix had to establish its brand through marketing as it expanded internationally. As a result, Disney+ should see a spike in sign-ups whenever it enters new markets.

Disney+ just launched in Australia and New Zealand a week after the North America introduction. It'll expand to Western Europe in March.

Disney's well-established brands also mean its content investments will likely be fairly efficient. Netflix uses its troves of data to inform which series and films it greenlights and, importantly, how much it spends on those originals. Disney's starting from a much smaller subscriber base and has much less data as a result. That said, Disney's direct-to-consumer chief, Kevin Mayer, doesn't believe data offers as much value to the creative process as others may believe.

Producing content within the five main brands of Disney+ -- Disney, Pixar, Marvel, Star Wars, and National Geographic -- ought to generate efficient results to attract viewers to the service. Disneys' most popular original at launch is the new Star Wars series, The Mandalorian.

Disney's brand strength should enable impressive sign-ups at launch, but winning over more consumers over time by producing new originals within those brands should produce long-term success in gaining subscribers.

Jeunger's estimates for Disney+ subscribers are tempered by the belief that early subscribers may just be pulled forward from a customer base that was going to subscribe to the service eventually.

"In the very extreme case, one could go so far as to argue that, basically, everybody who will ever be interested in signing up for Disney+ will do so in the first couple of years," Juenger wrote. He added:

Indeed, Disney's brand strength is a double-edged sword. As mentioned above, Disney's marketing pitch is pretty straightforward to consumers, since they already know what Disney's brand stands for. There's not much education that needs to take place to get a consumers to try out Disney+.

But Netflix's continued success, both domestically and internationally, shows there's still a lot of room to grow even after a brand is well established in the direct-to-consumer media space. Disney can copy Netflix's playbook of growing content investments and keeping the quality of its programming high in order to attract more and more subscribers over time.

As long as Disney can execute on its Disney+ programming the same way it's executed at the box office in the recent past, it should have no problem growing subscribers long-term, and it could easily surpass the top end of the five-year outlook it provided back in April.