The Dow Jones Industrial Average (DJINDICES:^DJI) was up 0.15% at 1:30 p.m. EST Wednesday, recovering from a small morning slump. A strong retail sales forecast for the pre-Thanksgiving period may be helping things along.

Turning to individual stocks, Apple (NASDAQ:AAPL) rose following a report that the tech giant was doubling production of its pricey AirPods Pro wireless earbuds, while Caterpillar (NYSE:CAT) sank after some rough guidance from Deere (NYSE:DE).

Demand for $250 wireless headphones is apparently quite strong. According to Nikkei Asian Review, Apple has doubled production of its AirPods Pro, to 2 million units per month, in an effort to satisfy consumers' unquenchable thirst for the very expensive gadgets. Apple stock was up 0.9% on the news. 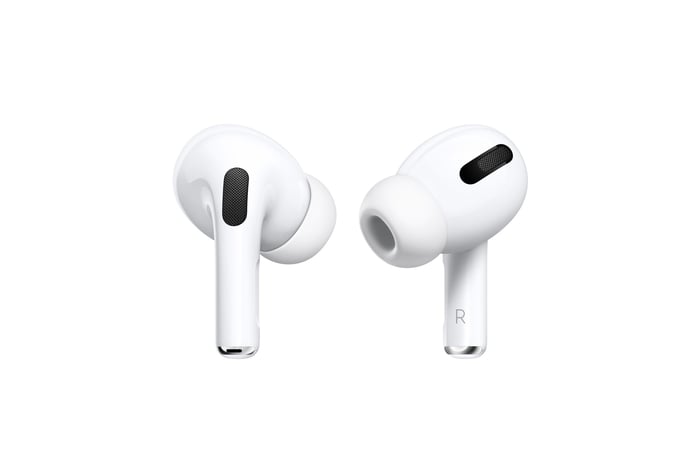 Last week, Bloomberg reported that overall AirPod sales are expected to hit 60 million units in 2019, partly due to higher-than-expected demand for the Pro version. With iPhone sales in a prolonged slump, non-iPhone products will need to pick up the slack for Apple in the years ahead.

Apple doesn't break out sales of AirPods, instead lumping them into its wearables, home, and accessories segment. That segment generated $24.5 billion of revenue in fiscal 2019, up 41% year over year. In addition to AirPods, the Apple Watch contributed to the segment's growth.

Apple doesn't disclose profitability of its segments, so it's unclear whether these new products are capable of fully offsetting lower iPhone profits. Apple's operating profit tumbled 9.8% in fiscal 2019, despite a smaller 2% decline in revenue.

Competition is coming for Apple in 2020: Microsoft is planning to launch its delayed Surface Earbuds in the spring, and Alphabet's Google will release its Pixel Buds around the same time. This holiday season, though, Apple's AirPods are positioned to be big sellers.

Shares of Caterpillar were down 0.6% Wednesday after rival Deere warned about profits in 2020. Deere beat analyst estimates for fourth-quarter revenue with 4.3% growth, but the company pointed to uncertainties in the agricultural sector.

"Lingering trade tensions coupled with a year of difficult growing and harvesting conditions have caused many farmers to become cautious about making major investments in new equipment," said Deere CEO John May.

For fiscal 2020, Deere expects to produce net income between $2.7 billion and $3.1 billion, down from $3.25 billion in fiscal 2019. "Despite present challenges, the longer-term outlook for our businesses remains healthy and points to a promising future for Deere," continued May.

Caterpillar reported its third-quarter results in October, slashing its full-year outlook as dealers reduced inventories and end-user demand came in below expectations. Caterpillar now expects to produce earnings per share between $10.90 and $11.40 this year, down from an earlier outlook of $12.06 to $13.06.

With Deere guiding for a profit decline in 2020, Caterpillar may follow suit when it reports its own fourth-quarter results.