Please ensure Javascript is enabled for purposes of website accessibility
Free Article Join Over 1 Million Premium Members And Get More In-Depth Stock Guidance and Research
By Keith Noonan - Nov 27, 2019 at 11:16AM

VR's first must-have game could be just months away and headset makers stand to benefit.

Steep hardware prices and a lack of big-budget, must-have content have been key limiting factors in the growth of virtual reality (VR). However, headset prices are starting to come down, and VR's first high-profile exclusive is on the horizon.

Video game maker Valve unveiled Half-Life: Alyx on Nov. 21 -- the first new content in the much-loved Half-Life video game franchise since 2007. It's also the first triple-A game from a major franchise that's been built from the ground up for VR, and the title has the makings of a real game-changer. A follow-up to Half-Life 2 has been one of the most anticipated titles among hardcore gamers for more than a decade, and Alyx stands out as the first killer app for expanding VR platform adoption. 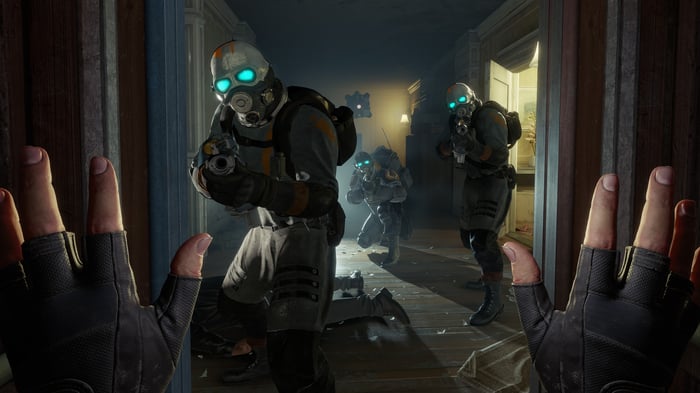 Half-Life is an ideal franchise for promoting VR

Outside of some chat-focused experiences and a handful of games and apps that have delivered on elements of the display medium's potential, virtual reality has been short on the type of high-quality content needed to justify its consumer-level hardware costs. That may be set to change, and probably sooner than many analysts and industry watchers were expecting. Half-Life: Alyx is currently set for a March 2020 debut, and just days after its unveiling, it's safe to say that no other piece of VR software has generated comparable levels of excitement and anticipation.

For a look at the game's announcement trailer, click on the video from Valve's official YouTube channel below:

We should always take game trailers with a grain of salt, as the promotional materials are not always indicative of the end product that will wind up in consumers' hands. That being said, the game's video debut looked very promising, showcasing a high level of environmental interactivity and set pieces and visual fidelity that compare very favorably to other VR experiences on the market.

Half-Life: Alyx will debut at the $60 price point that's currently the standard for triple-A games, a strong indication that this is going to be a full-fledged experience and not the type of relatively pared-down experience that has populated the VR category. Comments from the game development team suggest that the title's story mode will take roughly 15 hours to complete, another sign that this is the first big-budget VR game to hit the market.

One notable line of character dialog early in the trailer might have a double meaning. A character says, "If we can get this weapon working, it could change everything." It's probably not a stretch to read this as Valve's commentary on what the game could mean for the broader virtual reality space.

Half-Life 2 is considered by many to be one of the best and most influential games ever made. The game engine foundations for Half-Life 2 also went on to serve as the basis for other hugely successful games including Counter-Strike: Source, the Portal series, Team Fortress 2, and Left 4 Dead. There's a promising opportunity for Half-Life: Alyx's engine and design mechanics to support subsequent virtual-reality games and applications, and that could be a big catalyst for the medium.

Half-Life: Alyx has the makings of a breakthrough moment for VR

Half-Life: Alyx will launch with a VR-adapted version of Valve's new Source engine (dubbed Source 2), which will allow players to create new levels and additional content -- and also provide a potential new framework for professional game-development studios. This kind of open-ended invitation for skilled gamers to develop and modify their own content has dramatically expanded the life cycles of some of Valve's own properties, and it could turn into a big resource for third-party developers.

Half-Life: Alyx and the VR-optimized Source 2 engine have real potential to drive improvements in the breadth and quality of available virtual reality content. There's a good chance the game and engine will have meaningful impacts on VR headset sales as well. Valve says that Half-Life: Alyx was designed to be played on its Valve Index headset, but it will also be compatible with the HTC (OTC: HTCKF) Vive, Windows mixed-reality headsets from Microsoft ( MSFT 0.98% ), and the Oculus Rift and Oculus Quest from Facebook ( FB 3.60% ).

With the game's impressive visuals and the extra computational demands for rendering virtual reality experiences, the new Half-Life will require powerful hardware to run. That will limit the title's mass appeal in the short term, but the game will likely boost headset sales out of the gate and become more accessible with time.

Technology investors and analysts watching the VR space shouldn't count on Half-Life: Alyx to drive mass adoption for virtual reality platforms on its own. It doesn't need to. The likely goal is to drive adoption among hardcore gamers and technology enthusiasts, and that's something that a high-quality Half-Life experience and new Source engine are uniquely well-positioned to do. Winning these demographics could be key to building the momentum that's needed to push VR closer into the mainstream, and Valve's initiatives on that front are very encouraging.