The hotel industry is notoriously cyclical and capital intensive. Building a hotel requires a massive amount of up-front investment in real estate and fixtures. The financial success of a hotel can largely depend on the economy, which influences occupancy and room rates.

To help mitigate at least some of the complexities, many of the largest hotel chains, including Marriott International (NASDAQ:MAR) and Hilton Worldwide Holdings (NYSE:HLT), have split into different companies. One company is focused on delivering hospitality services, and another manages the real estate. Investors like more-focused companies because they are easier to understand and value -- they also tend to execute better. As a result, Hilton Worldwide has seen its stock price go up since the split. 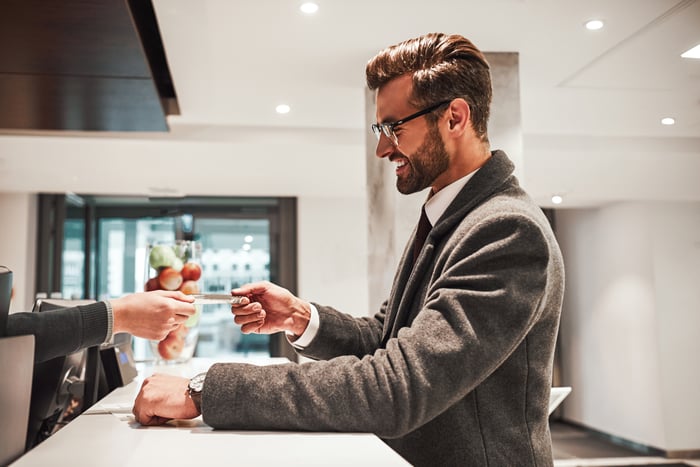 Park Hotels is a publicly traded real estate investment trust (REIT) containing Hilton's premier resort properties, primarily in the United States. As of February 2019, the company's portfolio consisted of 52 hotels with over 30,000 rooms, most of which are considered to be luxury and upper-upscale properties. The company recently completed the acquisition of Chesapeake Lodging Trust, expanding its portfolio to 66 hotels with over 35,000 rooms.

The other asset spun off from Hilton is Hilton Grand Vacations, which sells timeshares at 54 properties at vacation destinations including Las Vegas, Hawaii, and Orlando, Florida.

As part of the spinoff, Hilton Worldwide transitioned to becoming mostly a hotel franchiser and hotel management company. Hilton has retained an ownership interest in 71 hotels, but most of the company's earnings now come from collecting fees on properties it does not own.

Hilton's bread and butter is managing and licensing hotel brands, including the Waldorf Astoria, Hampton Inn, and Hilton names. As of the end of 2018, Hilton franchised 4,925 properties and managed 689 hotels.

In franchise agreements, Hilton will allow independent hotel operators to use one of its brand names and provide the operator with marketing support. In exchange, each franchise operator pays Hilton a royalty fee equal to 4% to 6% of a hotel's monthly revenue. In addition, franchisees will reimburse Hilton for advertising expenses and other centrally managed costs such as IT and quality assurance programs.

Hilton doesn't employ anyone at franchised locations, but will periodically inspect them to make sure they are living up to the brand's standards. It's not easy to become a Hilton franchise operator. Prospective partners need to have their hotel locations and business plans approved by the company before they can get up and running.

The company's hotel management involves Hilton directly employing the staff at third-party-owned hotels to deliver hospitality service to guests. This is a more hands-on approach and garners higher fees for Hilton. The company collects 3% to 5% of a hotel's monthly revenue and in some cases an incentive fee equal to 10% to 35% of a hotel's profit. Hotel management clients are also responsible for reimbursing Hilton for expenses, including advertising and IT.

As can be seen from the table above, franchise and license fees are the company's largest source of revenue. Hilton still generates over $1.4 billion in revenue from its owned hotels, but this is a lower-margin business and therefore represents a fairly small portion of overall company profit.

As a franchise operator and management company, Hilton Worldwide is a fairly lean business. The company no longer needs to make large capital investments into real estate. It simply focuses on brand building, advertising rooms, and delivering hospitality services. 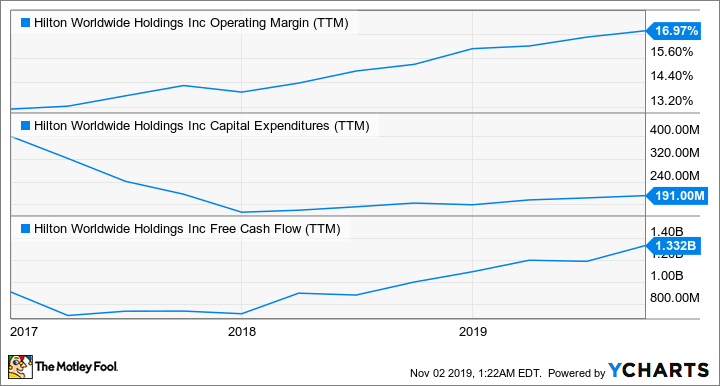 There are several positive financial results from this change. First, Hilton has seen its operating margins expand as it is able to leverage its fixed cost base at headquarters while it grows its franchise-fee base. Second, the company has been able to cut its capital expenditure budget. And third, the company has seen its free cash flow rise on an absolute basis but also as a percentage of revenue as margins have increased and capital expenditures have fallen. 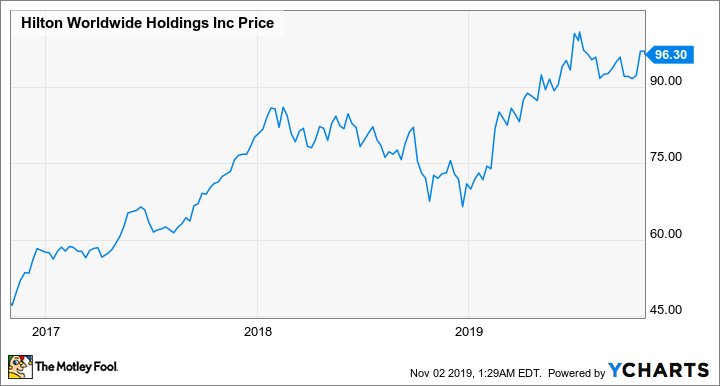 In short, the asset-light model is working financially and is delivering strong growth in cash flows. Hilton's financial metrics are up since the company's breakup and so is its stock price, making it a stock to consider for your investing portfolio.