Please ensure Javascript is enabled for purposes of website accessibility
Free Article Join Over 1 Million Premium Members And Get More In-Depth Stock Guidance and Research
By Evan Niu, CFA - Nov 28, 2019 at 11:30AM

Just as rivals had started to chip away at the Mac maker's dominating market share.

It's now been about a month since Apple ( AAPL 3.16% ) launched AirPods Pro, a higher-end variant of its wildly popular AirPods that feature active noise cancellation (ANC) and improved water resistance. The company has long dominated the market for hearables, but its market share slipped modestly in the third quarter to 45%, according to recent estimates from Counterpoint Research. Tech companies large and small are jumping into hearables, hoping to grab a slice of the market for themselves.

The bad news for rivals is that AirPods Pro demand is off the charts, and Apple is scrambling to catch up. 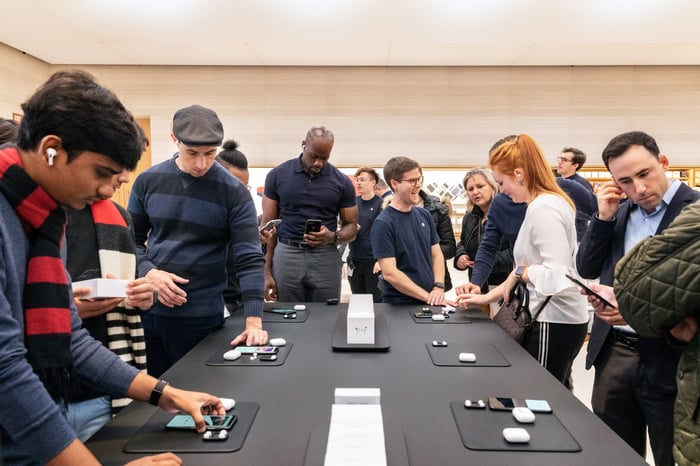 The Nikkei Asian Review reports that Apple is working on doubling production of AirPods Pro in order to meet soaring demand. Contract manufacturer Luxshare-ICT is being tasked with ramping up to 2 million units per month at its China-based manufacturing factories, according to the report, while suppliers with Vietnam-based facilities are also being told to increase output of the regular AirPods.

"Apple has increased monthly orders for the latest AirPods Pro from 1 million units to at least 2 million units thanks to healthy demand," an anonymous source told the outlet. The company does not officially disclose AirPods unit volumes but is expecting unit volumes to double to 60 million this year, according to a report from Bloomberg last week. Wearables have become one of Apple's fastest-growing segments, helping offset iPhone weakness in the third quarter.

Despite the growing importance of the product category, CEO Tim Cook declined to elaborate on what kind of wearables attach rate Apple enjoys for iOS devices. "We're not releasing the precise numbers of our wearables, but it is a really nice try and get me to say that," Cook said in response to an analyst question during the Q4 earnings call.

Apple's decision to source such an important product from China-based facilities while trade tensions remain elevated is a testament to Luxshare's prowess as a supplier. AirPods Pro are subject to the tariffs that President Trump has implemented, although Apple is lobbying Trump for tariff exemptions. The Tweeter in Chief recently attempted to take credit for Apple's decision to produce the new Mac Pro domestically, claiming he "opened a major Apple Manufacturing plant in Texas." That facility has been open since 2013 and is operated by contract manufacturer Flex.

A growing portfolio of audio products

Just as rivals were starting to make progress in hearables, Apple might be able to reclaim lost market share with its barrage of new audio products. Prior to releasing AirPods Pro, Apple also launched Powerbeats Pro and Solo Pro under its Beats brand in recent months.

Microsoft recently announced Surface Earbuds, which have now been delayed to spring 2020. That also happens to be when Alphabet subsidiary Google plans to start shipping its Pixel Buds 2. Both competing products will miss out on the busy holiday shopping season, which Apple will be happy to take advantage of.