Please ensure Javascript is enabled for purposes of website accessibility
Free Article Join Over 1 Million Premium Members And Get More In-Depth Stock Guidance and Research
By Evan Niu, CFA - Nov 22, 2019 at 8:30AM

The enterprise software giant needs more time to get the product right, according to hardware chief Panos Panay.

Much like fellow tech giant Google, Microsoft's ( MSFT -0.15% ) first foray into into true wireless earbuds will end up missing out on the 2019 holiday shopping season. Both Microsoft and the Alphabet subsidiary had recently unveiled new sets of true wireless earbuds, with Google's Pixel Buds 2 set to ship in spring 2020, while Microsoft had initially planned to ship its $249 Surface Earbuds before the year's end.

Prospective Surface Earbuds buyers are going to have to wait. 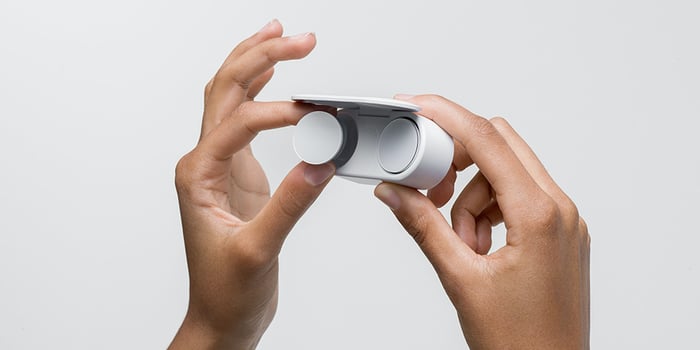 Microsoft needs more time than it "planned on"

Microsoft hardware chief Panos Panay announced on social media that the launch of Surface Earbuds has been delayed until spring 2020, in order to give the enterprise software juggernaut more time to "get all the details right."

Product-making is about the relentless pursuit to get all the details right, which takes time...sometimes more than we planned on. To ensure we deliver the best possible experience for you, our fans & customers, Surface Earbuds will now launch worldwide in Spring 2020 #Surface

Surface Earbuds are Microsoft's attempt to challenge Apple ( AAPL -0.32% ) in the booming market for hearables, ear-worn wearable gadgets. Apple's AirPods essentially created the product category, which the Mac maker continues to dominate even if its market share has started to slip due to an onslaught of competition. After Microsoft unveiled the Surface Earbuds in early October, Apple subsequently released its AirPods Pro later that month at the same $249 price point.

Panay did not elaborate on why the product is being delayed. But considering the technical complexity of the integrations combined with the high stakes of a successful launch, Microsoft is wise to take its time. Launching an unfinished product prematurely would be a huge embarrassment, particularly since the earbuds represent Microsoft's first major foray into hearables.

The hearables market is booming

Within the broader wearables market, hearables have emerged as one of the fastest-growing subcategories. Hearables represented nearly half of the entire wearables market in the second quarter, up from around a quarter a year prior, according to IDC. More recently, Counterpoint Research estimated that hearables global unit volumes jumped 44% sequentially to 33 million units in the third quarter.

Microsoft wants a piece of that growth, and waiting a few more months won't derail its ambitions.