It's been two weeks since the highly anticipated launch of Disney's (NYSE:DIS) new streaming service Disney+. While there were some unsurprising first-day technical glitches, strong demand from fans attracted more than 10 million subscribers the first day and drove Disney stock to new all-time highs.

Many suspected that the strong showing would have a negative impact on some of the existing streaming services. It turns out that may not be the case. In fact, two weeks post launch, not only is Disney+ thriving, recent data suggests a surprising beneficiary from Disney's entry into the streaming space. 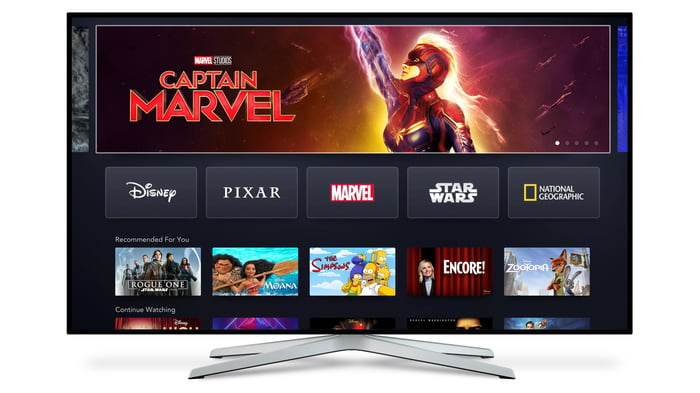 Evidence suggests that the incredible demand for Disney+ has continued since its debut. Disney fans have downloaded the app 15.5 million times during the first 13 days since the service debuted, according to a new report released by market intelligence company Apptopia. This suggests that Disney+ has been pulling in more than a million downloads each day since the launch. It's important to note that this just counts app downloads and doesn't include subscriptions completed via smart TVs, so the number could be significantly higher. The data also indicates that Disney+ generated about $5 million in in-app purchases.

Disney+ has been the No. 1-ranked app download in the U.S. over the past two weeks in both Apple's App Store and Alphabet's Google Play store ,according to Apptopia. Disney+ has also been the highest-grossing app on both platforms, suggesting that many consumers are beginning their subscriptions immediately and foregoing the seven-day trial period.

Impact on the incumbents

Investors in the current streaming leaders, including Netflix (NASDAQ:NFLX), Amazon.com's (NASDAQ:AMZN) Prime Video, and AT&T's (NYSE:T) HBO have been on the edge of their seats, waiting to see how the launch of Disney+ would impact their respective services.

Apptopia said "It appears in the early going that Netflix, Amazon Prime Video and HBO are unaffected by Disney+. Looking at U.S. data for these apps, (Disney+ is not globally launched yet), we see download and user session trends uninterrupted from their trend lines."

That data is further supported by a recent study conducted by analyst Michael Olson of Piper Jaffray. The investment bank surveyed 1,700 U.S. Netflix subscribers and found that while viewers reported increased interest in Disney+, it wasn't coming at Netflix's expense. "We have not seen an increase in the percentage of Netflix subscribers who expect to cancel Netflix in favor of Disney+," Olson wrote in a note to clients last week.

It was doubtful that Prime members would cancel anyway, as customers subscribe primarily for the expedited shipping of products purchased on Amazon's e-commerce website.

Disney's decision to offer a discounted bundle of Disney+, Hulu, and ESPN no doubt helped boost interest in its two existing services, which was no surprise. This was confirmed by Apptopia's data, which found that downloads of Hulu and ESPN+ surged in the 13 days since Disney+ launched, growing roughly 55% and 52% respectively, compared to the prior 13-day period.

The unexpected beneficiary in all this was Roku (NASDAQ:ROKU). The streaming pioneer is best known for its set-top boxes and dongles that make finding your favorite streaming apps easier. Roku's mobile app acts as a remote control for its devices and televisions using the Roku operating system, which is found in one in three smart TVs sold in the U.S. The Roku app lets viewers search entertainment options using voice controls or digital controls within the app.

Apptopia found that downloads of the Roku app increased by nearly 30% in the 13 days since Disney+ launched. Roku's management had predicted as much, suggesting that anything that drove users to Roku's platform would benefit the business.

This data shows that the much anticipated day of reckoning for streaming services may not materialize. Some investors expected the launch of Disney+ to be a zero-sum game, believing that with limited discretionary income, some consumers that subscribed to Disney+ would inevitably cancel some other streaming service. At least in the near term, that doesn't appear to be the case.