Please ensure Javascript is enabled for purposes of website accessibility
Free Article Join Over 1 Million Premium Members And Get More In-Depth Stock Guidance and Research
By Rich Duprey - Nov 28, 2019 at 9:33AM

The department store chain's deal to accept the e-commerce giant's returns isn't yet paying off in higher comp sales.

Kohl's ( KSS 5.41% ) is entering the Christmas selling season not feeling so merry after its third-quarter earnings report hit the market with a thud. The retailer badly missed on its top- and bottom-line estimates and cut its full-year outlook.

While the mid-tier department store blamed its troubles on an "increasingly competitive promotional environment," it doesn't look like Kohl's partnership with Amazon is helping any. The program under which the company accepts returns for the e-commerce giant was supposed to bring more customers through its doors, which would hopefully lead to incremental sales growth. However, based on its  comparable-store sales, which are up by an anemic 0.4% -- below analysts' consensus prediction of a 0.8% rise -- whatever store traffic gains it's realizing from that partnership aren't translating into many sales. 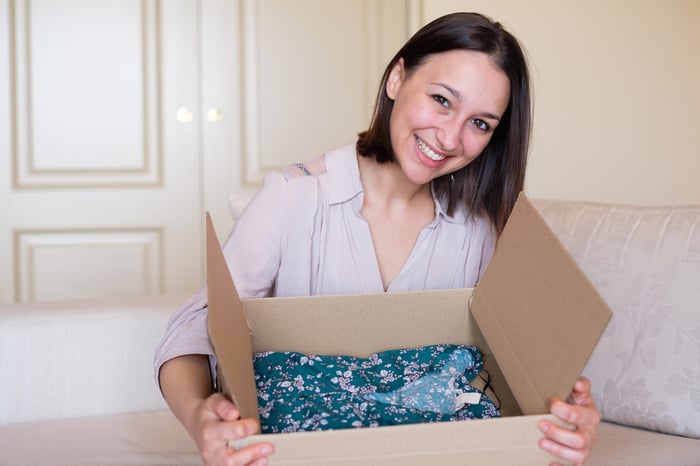 A reason to go shopping

There was some sense to Kohl's strategy. By providing Amazon customers with an easy, no-hassle, no-cost way to make product returns, it gives them another reason to visit. And that group -- theoretically a younger demographic -- is just the one Kohl's is targeting with its broader revamp.

Geolocation data has shown higher foot traffic at the stores where the Kohl's piloted the program after it started accepting Amazon returns. The effect has been studied at various points of time, and the results are fairly similar, which indicates that people are at least using Kohl's stores as dropoff points.

The process is simple. When you want to send an Amazon product back, you go to the Amazon site and choose how you wish to return it -- with one of the options being at a local Kohl's store. If that's what you pick, you get a QR code to show when you bring in the item -- and it's fine if the original packaging is missing. Kohl's will box it and ship it back for you at no cost.

"The program is driving incremental traffic into our stores," Kohl's CEO Michelle Gass told analysts on the earnings conference call, "and we are particularly encouraged by the disproportionate amount of new customers, which on average are also younger than the typical Kohl's customer."

The problem seems to be that those Amazon customers just aren't buying much after returning their packages. Further, there are limits on just how many people will avail themselves of the service.

Many ways to ship a package

UPS ( UPS 0.66% ), which is one of Amazon's primary parcel delivery services, has a similar return program in place, and there are more than 4,800 UPS Stores around the country -- more than four times the number of Kohl's stores.

When I recently needed to make an Amazon return, I had the option of using either Kohl's or UPS, and I chose the latter because it was both closer and didn't require me to drive to the local strip mall. Naturally, for some people, the nearest Kohl's might be closer than the nearest UPS Store, but the odds are it's the other way around.

Moreover, the partnership is not cost-free for Kohl's. In the third quarter, the retailer said its selling, general, and administrative expenses rose 3.2%, or $44 million, to $1.4 billion in part because of the costs associated with returning Amazon packages. Other costs included brand launches, rising wages, and earlier holiday hiring.

Yet Amazon really only just started ramping up this service nationally this quarter, so the expenses associated with it will undoubtedly rise further.

Investors, though, might want to cut Kohl's some slack over this quarter. (They didn't; Kohl's stock cratered 16% on the earnings news.) The department store suddenly has a lot of plates in the air. It's possible the returns program will at some point start bringing in new and younger consumers who, upon seeing the merchandise Kohl's is introducing, might just have their interests piqued enough to make purchases.

While it doesn't seem like the Amazon partnership will move the needle much regardless, the revival plan Gass is implementing should be given time to work. She admits the chain has more headwinds to fly through in the fourth quarter, but investors should have a better idea with the new year about just how all the puzzle pieces are fitting together.