Most people are familiar with Hilton Worldwide Holdings (NYSE:HLT) and its brand of hotels. The Hilton name goes back 100 years and includes over 5,700 properties worldwide. But many investors may not realize that Hilton's business has continued to grow briskly, delivering excellent results for shareholders. 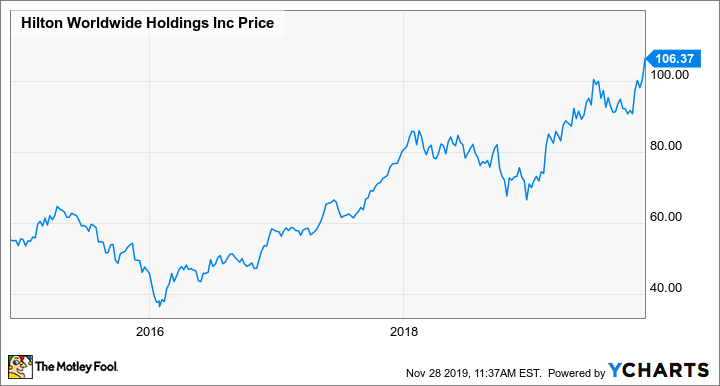 The core of Hilton's growth strategy has been its shift from a vertically-integrated hospitality and property management company to a focus on hospitality. In 2017, Hilton spun off its time-share business to create Hilton Grand Vacations, and a large chunk of its physical hotel properties went to Park Hotels & Resorts. Now, the slimmed-down entity generates most of its revenue from lucrative franchise fees and hospitality management contracts that provide it with a cut of its franchised and managed hotels' monthly revenue.

A major responsibility for Hilton as the global franchisor of its brands is to produce compelling advertising and marketing. The company has hit traditional and online marketing channels hard with its "Expect Better, Expect Hilton" campaign featuring the actress Anna Kendrick. The focus has been to persuade younger travelers to stay at a traditional hotel instead of competing lodging options like Airbnb and to remember to book directly with Hilton instead of an online travel website such as Expedia.

To incentivize guests to book directly with Hilton, the company has promoted its loyalty program and offers to match the best price offered on any website -- giving travelers both the best price and loyalty rewards points.

The response has been encouraging. Hilton has seen its loyalty program jump from 36 million members in 2012 to 94 million this year. The growth of this effort is especially promising as loyalty program members represented over 60% of the hotel chain's occupancy as of the second quarter of 2019. 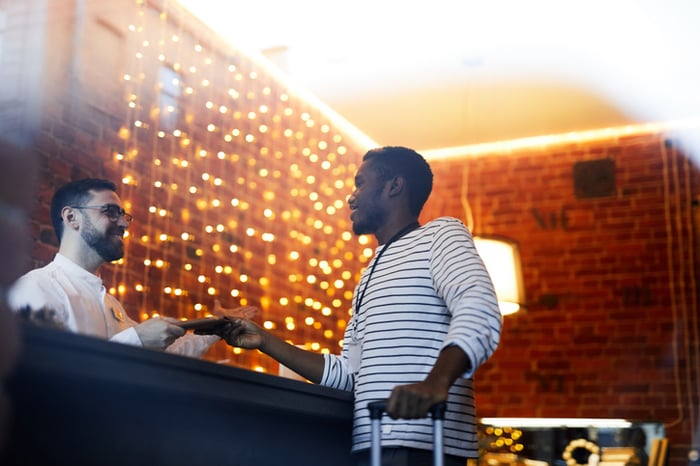 A large pipeline for new hotels

In turn, this strong performance has attracted franchisees to open new hotels, which is important for growth as the parent company is no longer investing in physical real estate. Instead, Hilton must recruit and train third-party franchisees and approve their plans. And property developers want to open Hilton hotels -- the company says it has a pipeline of 2,530 hotel projects, which would add approximately 379,000 rooms in the coming years.

That pipeline should propel Hilton's market share above its current 5% of global room supply, because the chain accounts for roughly 18% of total rooms under construction. Hilton's share of this development is significantly greater than its large peers, including Marriott and IHG.

These are signs that investors should continue to expect solid growth from Hilton as it expands its size and loyalty program. It just needs to continue to focus on building its brand and attracting travelers.

The company's financial model also ensures that the growth coming through is profitable. Due to its franchise-based business, Hilton doesn't have to invest in the development of new properties. Developers pay the upfront costs, and Hilton can start collecting franchise and management fees when the hotels open. 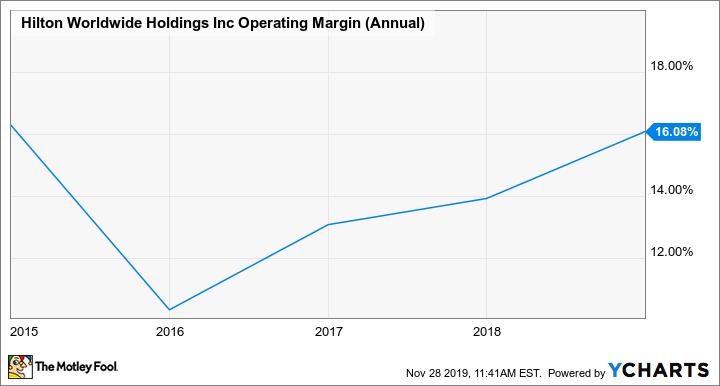 As you can see, Hilton boasts a nice operating profit margin that has been trending higher since reorganizing its business. And because Hilton does not incur much incremental cost on new hotels coming online but benefits directly from the franchise revenue, the company will actually see its profitability rise as it grows bigger. Mariott has also employed this franchise model to great success.

This operating model makes growth extremely lucrative. As long as the company can keep attracting travelers and hotel operators, investors should expect the good times to continue.