Please ensure Javascript is enabled for purposes of website accessibility
Free Article Join Over 1 Million Premium Members And Get More In-Depth Stock Guidance and Research
By Justin Cardwell - Nov 29, 2019 at 7:30AM

Income investors reaching for defensive plays against the next recession should be looking for sustainability and growth potential in each company they consider for their portfolio.

Verizon ( VZ -2.69% ) is the largest provider of wireless services within the United States and pays an impressive forward dividend yield of 4.13%. However, the communication company's growth may be hindered in the near term with an impending price war for services in addition to unsuccessful acquisitions and a slow rollout of 5G services.

Is that enough reason to pass on Verizon as a potential dividend stock to invest in? 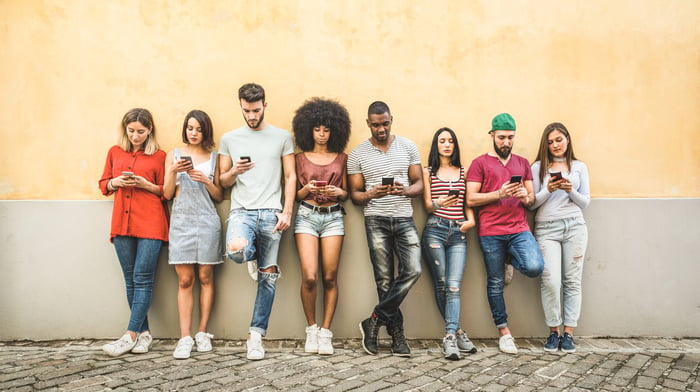 Right on target with earnings

For the recent third quarter of 2019, Verizon announced an earnings-per-share (EPS) increase of 2.5% year over year. Verizon reported flat growth in its business and consumer segments, with a decline in the media segment.

Smartphone additions showed growth, totaling 372,000, an increase from 2018 third-quarter additions of 285,000. Operating income for the consumer segment increased 3.8% year over year with an operating margin of 33%.

Declines in legacy wireline products offset the growth in wireless services in the business segment -- showing flat results year over year. A reported gain of 12.1% in the wireless retail postpaid net additions consisted of 50.2% from phone additions, 27.4% from tablet additions, and 22.3% from other connected device additions.

Weakness in the near term

Verizon is hoping that data-dependent mobile will be key moving forward; however, Verizon showed signs of weakness in 2017 by revamping its unlimited data plan (which it discontinued in 2011). Shortly following Verizon, competitors moved to the unlimited plan -- potentially removing a revenue component of multiple data plan offerings from the business.

In addition, Verizon was forced to write down a goodwill impairment charge of $4.6 billion in December 2018 from "competitive pressures" in the digital ad business -- which was a partnered effort among Verizon as well as Yahoo! and AOL -- two companies Verizon acquired for $10 billion total in 2015 and 2017.

Verizon's new CEO, Hans Vestberg, has announced a $10 billion cost-cutting initiative over the next four years -- buying out 10,400 employees and investing the savings into 5G -- putting a small dent in Verizon's substantial debt load of $131.87 billion.

Investments in 5G aren't expected to produce "substantial revenues" until 2021 -- with the business segment not seeing results until 2022. Verizon has stated that 5G will increase speeds at least 10 times over current service speeds; however, there will be a period during which devices and software will need to adapt to increased speeds -- creating a lag between demand and supply. Verizon's 5G network launched in April 2019 in Minneapolis and Chicago and is expected to reach 30 cities by the end of 2019.

An impending price war between competitors seems inevitable after the U.S. Department of Justice greenlit the pending merger between Sprint ( S ) and T-Mobile US ( TMUS -4.05% ). AT&T has thrown the first stone, dropping the AT&T unlimited plan $5 per month below Verizon's. If a price war ensues, there could be trouble for profit margins -- leaving Verizon's wireless market share vulnerable to competitors.

Two Verizon stock downgrades in November from Nomura and HSBC Securities have forced investors to question Verizon as a sustainable income investment over AT&T, as Verizon currently trades at a forward price-to-earnings ratio of 12.35 over AT&T's 10.52.

AT&T's forward dividend yield of 5.49% beats Verizon's 4.14% yield, but both companies are sitting on mountains of debt. Investors chasing dividend yield and value should strongly consider purchase shares of AT&T over Verizon, because AT&T is branching into the streaming wars with HBO and WarnerMedia -- diversifying revenues away from an impending wireless services price war.