Wayfair (NYSE:W), an online-only purveyor of home-related goods, has had success reaching its targeted customer (35-to-65-year-old women with incomes ranging from $50,000 to $250,000), serving over 19 million active customers and generating $8.6 billion in revenue for the 12 months ended Sept. 30. However, the company has raised spending on items such as advertising and technology to gain ground in a competitive industry, and has expanded internationally before management has proven that its business model can generate profits. Wayfair is losing money in a growing economy and the company has borrowed to raise cash.

This means there are significant hurdles for the company to jump over before it reaches sustained profitability. A challenge even in good economic times, this could prove particularly hard during an economic slowdown. The share price, which has fallen by nearly 50% since reaching an all-time high in March, could get crushed during the next recession.

Here are some key financial figures:

Notably, the company has been spending much more on advertising. So the cost to acquire customers is increasing. It is also not clear that management can afford to reduce this expense anytime soon since there is a lot of competition. While Wayfair cites its broad merchandise selection, convenience, and attractive prices, the fact is others offer the same compelling proposition. This includes colossus Amazon.com and major specialty retailers such as Ethan Allen Interiors.

Management has also increased hiring in technology and operations. In its third-quarter filing, Wayfair said this was done to continue improving the customer experience. While this is laudable, the company will need strong revenue to continue to leverage these fixed costs. Granted, management expects these expenses to moderate going forward since the company plans to slow down hiring, but it says that operating leverage will not take hold for a few more quarters.

Wayfair's strategy has included expanding internationally, notably in the U.K., Germany, and Canada. But these efforts have produced a similar pattern of increased revenue and widening losses. Management added this challenge before its domestic business turned profitable.

The mounting losses have resulted in Wayfair's burning increasing amounts of cash. For the first nine months of 2019, the company's free cash flow was -$439.2 million, nearly four times last year's -$113.9 million. Wayfair has funded the cash shortfall by issuing convertible debt for the last three years, with its most recent issuance being this past August's nearly $950 million deal. With $1.3 billion in cash, liquidity is not a current concern, but it is something to keep in mind since the company may find the market is not so cooperative in the future. 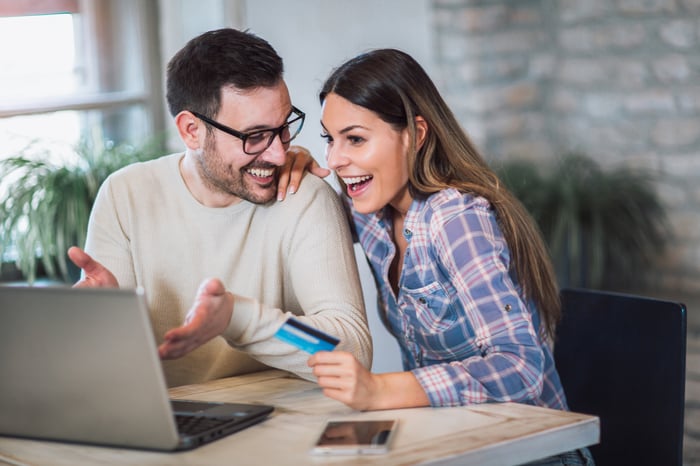 Despite this success, the company has reported everwidening losses. Clearly, the company has created a compelling shopping platform that has attracted customers and kept them returning. But this has not translated into profits, which could leave the company in a challenging position when economic conditions soften.

Wayfair has notched revenue gains during an economic expansion. In July, the United States, which accounts for about 85% of the company's revenue, set a record for its longest economic expansion, at 121 months. While forecasting when the next recession will come is impossible, I know one will occur eventually. No doubt, this will pressure Wayfair's revenue growth and hurt its bottom line.

In the last recession, home furnishings retailers took it on the chin, with the number dropping from more than 65,000 in 2007 down to 52,000 in 2012, and sales declined from $108 billion to $89 billion over the same time frame, according to one estimate.

Investors will want to keep an eye on how strong Wayfair is headed into the next recession.