Others have tried and failed, but the cheap-chic retailer struck the right chord with the right consumers in the right places.

For years, major retailers have seen small-format stores as a means of better serving new markets, often in dense urban areas where it would be too costly or too impractical to open a full-size location. But launching a successful line of these smaller stores is no easy task.

Walmart abandoned the idea altogether in 2016, deciding to shutter all of its remaining small-format Walmart Express stores. Meijer and Whole Foods are two other retailers that have at least partially pared back the number of smaller locations they operate, though they're hardly the only two retailers that have given up on the idea.

What its rivals were unable to do with smaller locations, though, Target ( TGT -2.46% ) seems able to achieve. Because they're showing "encouraging results," as Chief Operating Officer John Mulligan put it during the company's third-quarter earnings call, the retailer aims to open 30 of these stores per year "for the foreseeable future," adding to the 100 that are up and running right now. 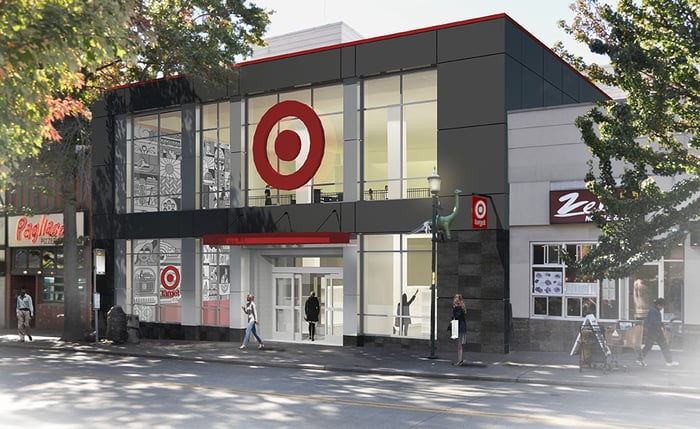 The burning question is, of course, what has Target done differently from its peers that didn't find success with the premise?

Take it all with a grain of salt, as we don't know to what extent -- or even if -- these small stores are profitable. There are only a little more than 100 open right now, versus a total store count of roughly 1,900 when factoring in full-sized locations. The rest of the organization could absorb any losses incurred by these stores that typically cover between 20,000 and 40,000 square feet (about a quarter to a third the size of a typical Target location).

Still, perhaps in an allusion to strong single-digit same-store sales growth, a Target spokeswoman commented in August that "the sales productivity of Target's small-format stores is twice our company's average." It also stands to reason that with several years' worth of operational data to analyze, if they weren't fruitful, the company would know enough not to move forward with those expansion plans.

The secrets of the smaller stores' success are up for debate -- it's possible that not even the company knows exactly what makes these locations tick. A couple common threads repeatedly surface in discussions about this sliver of Target's store mix, however.

Most obvious among them is location. Many of these stores are seemingly located near college campuses and, as such, clearly draw in students. Others are located in similarly urban areas where alternatives and larger stores aren't readily accessible.

Almost as obvious to shoppers is that Target's small stores also sport local flair. Inventories can vary greatly from one of these stores to another perhaps just a few miles away. Stores near colleges and busy business centers might offer more grab-and-go meal options as well as local college apparel, while less urban areas might feature more baby toys and children's clothing. The "local" vibe goes beyond product assortment, too -- 60 of these stores feature art created by local artists.

Successfully managing that inventory with a minimal amount of stockroom space required a major rethinking of how deliveries are made to these locations. Smaller but more frequent inventory deliveries allow for the necessary flexibility. Target's small, more urban stores also act as pickup points for online orders, drawing in would-be nearby shoppers who might not be willing to make the trek all the way to the nearest big-box competitor. To that end, these locations also offer a shop-and-drop delivery option. For a small fee, customers can have their purchases delivered to their homes while they go back to work, class, etc.

The importance of convenience and accessibility shouldn't be underestimated.

None of the nuances that are working for Target were out of reach for Walmart when it was cultivating its Walmart Express venture or for other companies that tried and failed to do the same. The key difference was a willingness from Target to tiptoe into more densely populated areas and to revamp inventory-management systems for a particular zip code rather than a particular city.

This growth experiment is not a reason in and of itself to invest in Target if you don't already own it. The small-format strategy might be working for this best-in-class retailer -- it might even be the future of the industry -- but there just aren't enough of them to move the needle for the massive company yet.

But give it time. The United States is home to more than 4,000 colleges and more than 50 metropolitan areas with populations of one million or more people, each of which could support several small-format Target stores. This initiative could easily become the retailer's next big growth engine, even if rival Walmart missed the mark.