It was obvious Canadian powersports vehicle manufacturer BRP (NASDAQ:DOOO) was going to issue yet another strong quarterly earnings report; the question was just how good it was going to be. Now that the results are out, we have our answer: really, really good.

Once again BRP had nearly across-the-board strong sales in all of its divisions, and it is doing so well it may just give rival Polaris Industries (NYSE:PII) reason to worry about losing sales and market share. 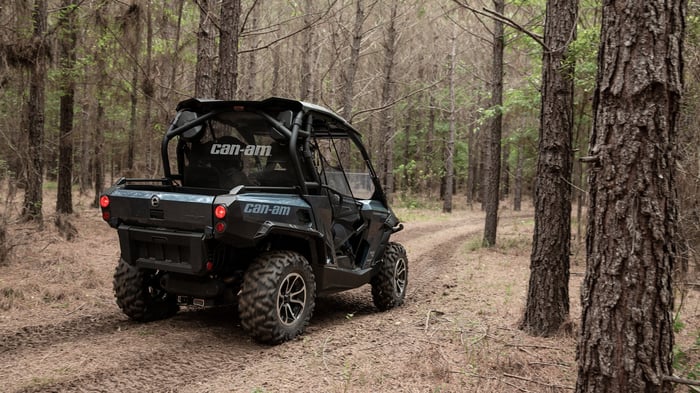 Taking a different path to growth

BRP said revenue jumped 17.9% in the third quarter as its North American powersports business surged 24% on a 30% gain in side-by-side vehicle (SSV) retail sales and the introduction last year of its low-cost Can-Am Ryker three-wheeler.

The Ryker is targeted to a completely different type of customer than the ones who purchased previous Can-Am three-wheelers. While the average age of a person who owns one of the Spyder RT and F3 models is 59 years old, the Ryker buyer is about 10 years younger, right in the targeted range of 33 to 55.

BRP is going after this customer with a decidedly lower price point, around $8,500, or about half the cost of the previous entry level three-wheeler, the Spyder F3. It's also much cheaper than Polaris Industries Slingshot, which starts at $21,000. Sales of the Slingshot have been so poor that Polaris is considering winding down production of it. CEO Scott Wine has said they're giving it time to turn around, but thus far there's no hint that's occurring.

What should be more worrisome for Polaris, though, is just how well BRP is doing in the SSV market, especially in the U.S.

Polaris has long dominated SSVs based on the strength of its RZR model, which literally blazed new trails when it was introduced because it was the first side-by-side that met federal vehicle width standards for off-road vehicles. Sales of SSVs were up by low-single-digit percentage rates in its third-quarter report last month.

BRP, however, far outpaced that with its 30% retail sales gain in the quarter, much of which came from growth in the U.S., a market that now represents over 54% of total sales compared to 50% a year ago.

Last quarter BRP launched its eighth new platform for SSVs, the Can-Am Defender 6x6, which helped boost sales, along with the Maverick X3, introduced in 2016.

Both BRP and Polaris had good quarterly snowmobile sales, as shipments to dealers in preparation of the season rose.

BRP also has a strong contingent of personal watercraft (PWC) vehicles, which had a good third quarter despite getting off to a rocky start this year due to poor weather. But the segment bounced back last quarter and was going up against 25% gains in SSV and PWC sales this time around, and certainly in side-by-sides it was able to exceed that growth.

The one area where BRP continues to struggle is its new marine segment, which was created when it made several boat builder acquisitions. Marine revenue fell 2.3% this quarter as it experienced lower outboard engine sales.

Competing boat manufacturers like Yamaha used to equip their boats with BRP Evinrude engines, but once BRP started competing against it in boat sales, it dropped BRP as a supplier. BRP is looking to offset those losses by having Evinrude added to dealerships that carry its Alumnacraft and Manitou boats.

Because Polaris Industries is putting up comparatively weaker numbers and is even struggling in its motorcycle division, it should worry investors that BRP is going from strength to strength almost across the board, which could lead it to catching and perhaps surpassing its rival.