Only one was a retailer (of sorts).

This year might have delivered a Black Friday to remember for consumers and the retail industry, given the healthy sales figures, but this success wasn't reflected in the stock market's performance. The main indexes slumped for the most part, with shares of even some of the most popular retailers closing the day slightly lower.

Yet there was a clutch of stocks that refused to follow this trend. Here are two notables that rose while many of their peers dipped. 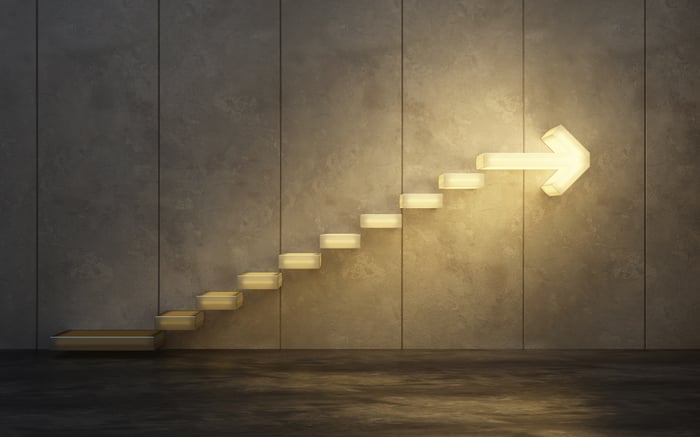 Peloton Interactive ( PTON -2.02% ) is a young tech stock, and as such tends to bounce around in price. Friday was a notch in the positive column for the company, as it rose nearly 10% to hit its all-time high (which, admittedly, isn't across a long stretch of time -- Peloton went public in September).

The company seems to have been a star on Black Friday. According to a report from Bloomberg, KeyCorp's KeyBanc Capital Markets (a member of the IPO's underwriting syndicate) said that Peloton was "seeing strong traffic" on the shopping holiday. Like other companies hoping to win consumer dollars on Black Friday, Peloton had a set of limited-time offerings around the day.

In the coming days, many retail or retail-adjacent stocks will be judged by the market for their performance on Friday. Although we'll need more corroboration (preferably of the audited variety from the company itself), investors clearly took the secondhand news of Black Friday success to heart.

Can the company sustain this momentum? I believe so. Yes, there's the tricky question of profit (as in, Peloton hasn't posted one yet). But it's a new-ish tech enterprise -- so red numbers on the bottom line are almost par for the course.

The company's innovative blend of hardware and subscription sales is a compelling prospect for fitness-minded consumers. It basically provides the opportunity to have a proper fitness class in the comfort of your living room.

I think there is much to like with Peloton and its stock. I think investors should still consider buying it even after this Black Friday bump.

Tech Data ( TECD ) is not a name overly familiar to many investors, even those who are fond of tech stocks. But the company is emerging from a mini bidding war between two well-capitalized finance sector companies, which is the key reason its stock shot up by 12% on Friday.

In mid-November, rumors about the somewhat under-the-radar wholesale technology distributor being the target of a takeover bid proved true. It agreed to be acquired by financial services company Apollo Global Management ( APO ) for $130 per share in cash.

Shortly thereafter, legendary investor Warren Buffett's Berkshire Hathaway ( BRK.A -0.45% ) ( BRK.B -0.59% ) made an offer of its own for $10 more per share. You see, Berkshire has a massive cash pile ($128 billion, as of the end of September) that it really should be putting to more productive use.

But Buffett and Berkshire aren't particularly willing to fight for acquisitions, so when Apollo topped that bid with a fresh $145-per-share offer that was accepted by Tech Data, Berkshire backed off. That left Tech Data shareholders with a short series of price bumps that have nicely enhanced the value of their investment.

So it seems the sale price is apparently nailed down. It's unlikely that a new would-be buyer will swoop down with a higher offer because deep pockets are needed here; Apollo's latest bid comes in at a total of over $5 billion. Assuming it holds, the shares have no upside since that $145 will be their final level before they depart the stock exchange.

That's a bit of a shame. On a fundamental basis, Tech Data was reliably profitable (if not spectacularly so), since it's essentially a middleman business, channeling tech equipment sales from manufacturer to the end-user. It's also done a good job increasing its revenue; the ever-growing thirst for cool and useful gadgets is likely a big driver of this. Its stock was a fairly steady riser for years before this recent pop, and as such, it'll be missed.

Apple Gets Slapped With $1.2 Billion Fine From French Regulators