An update from Apache on an important exploration well had investors concerned, and DexCom reported an outage of its blood sugar alert system.

Major benchmarks fell on Monday after President Trump reinstated tariffs on steel and aluminum imports from Brazil and Argentina. Also, a report from the Institute for Supply Management indicated that the manufacturing sector contracted in November for the fourth straight month, further dampening sentiment. The Dow Jones Industrial Average ( ^DJI 1.42% ) and the S&P 500 ( ^GSPC 1.85% ) closed down, with the real estate sector seeing the biggest losses due to rising long-term interest rates.

As for individual stocks, Apache ( APA 5.12% ) issued an exploration update that rattled investors, and an outage at DexCom ( DXCM 0.90% ) is affecting alerts from its devices. 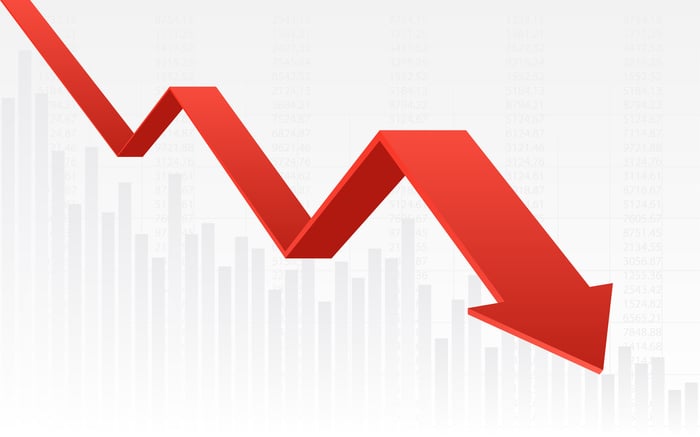 Shares of Apache fell 12.3% after the company issued an update on its exploratory well off the coast of Suriname and investors interpreted the release as bad news. The company didn't comment on test results and said it would drill deeper than originally planned.

Apache started drilling the Maka Central Number One well in late September with an expected drill time of 30 to 60 days and a target depth of 6,325 meters. Today's press release said that after reaching 6,200 meters, Apache is conducting tests on two plays and will keep digging down to 6,900 meters. Investors took the lack of detail on findings so far and the decision to dig deeper as bad signs.

Apache has high hopes for the project, saying last month that its exploration program in the large block near massive finds being developed by ExxonMobil is "potentially transformational." The stock has been under pressure lately, and new doubt around the first of three exploratory wells planned for the company's most promising opportunity had investors heading for the exits today.

DexCom, maker of continuous glucose monitoring (CGM) systems, reported an outage of its "Follow" app, which alerts parents when their diabetic children have life-threatening blood sugar levels. The stock, a favorite of growth investors, fell 1.5%.

The company reported the disruption on its Facebook page Saturday morning, and as of 10:25 a.m. PST Monday, the service had still not been fully restored. According to DexCom, "[A] server overload occurred due to an unexpected system issue that generated a massive backlog, which our system was unable to handle."

DexCom's CGM system monitors blood glucose levels every five minutes using a small sensor under the skin, eliminating the need for finger pricks to collect blood samples. This service outage highlights the potential issues of "connected" medical devices and the reliance that patients and their caregivers put on them, but the trend is clearly here to stay. DexCom's stock has been hitting new highs as investors bet on the company's accelerating sales growth.