Baozun (NASDAQ:BZUN) saw its stock get crushed after its quarterly earnings report arrived on Nov. 21 with a sales miss and weaker-than-expected guidance. The company provides help creating online stores and other e-commerce services, and has sometimes been referred to as "China's Shopify." It's been one of my favorite foreign-market growth picks, but I'm currently in the red on my investment and understand that there could be more volatility ahead.

Revenue for the quarter rose roughly 35% to about 1.5 billion yuan ($210.3 million), but top-line performance missed the average analyst's call for revenue of $214 million. The company posted adjusted earnings of $0.14 per American depositary share for the period, which represented 7.7% year-over-year growth and met the market's target. But analysts responded to the quarterly report and earnings call by slashing their full-year earnings targets.

Weaker-than-expected sales guidance from the company and a big analyst-side earnings revision sent the stock tumbling. The impact of an unnamed electronics brand leaving the platform wasn't encouraging, either. There are elements from Baozun's recent earnings release that raise questions and have dented confidence in the stock, but I responded by adding to my position in the company. Here's why. 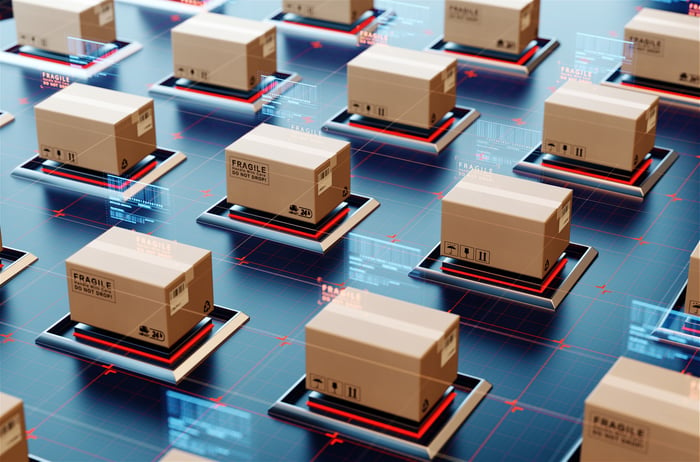 Baozun stock fell as low as $33 on Nov. 22 -- a level at which I happily expanded my total position, bringing down my average cost per share. Shares have now rebounded to the $36 range -- a level I still think presents attractive value.

Shares are now off about 46% from their all-time high, 36% from their high over the last 12 months, and 16% from the day before the third-quarter release. This is a volatile stock that sometimes posts substantial sell-offs even after great quarterly results, so it's not shocking that the stock got hit by a substantial pullback following the third-quarter release -- particularly with concerns about U.S.-China trade disputes still hanging in the air.

Analysts cut their full-year earnings target on the stock after the release, with the average target falling by 17.5%, according to data compiled by Yahoo! Finance. It's not clear what exactly prompted that dramatic revision, as weaker-than-expected fourth-quarter sales guidance probably wouldn't be enough to trigger that much of a change on its own. I'm presuming that the big earnings forecast cut for this year is probably warranted, but I have a long horizon on the stock and still have confidence it will put up strong performance over the next five years.

Putting the company's outlook in context

Baozun's midpoint sales target calls for revenue of $387.5 million in the fourth quarter, good for growth of 24% year over year -- but also significantly short of the average analyst's pre-release target for sales of $401.2 million. Gross merchandise volume is expected to grow between 45% and 50% in the fourth quarter, which should translate to increased sales growth down the line as business is realized from partners that have recently come on board the platform.

Despite a bit of a sequential sales slowdown based on Baozun's fourth-quarter targets, the company's sales growth is actually on track to surpass the 30% annual growth that the business posted in 2018 and wind up in the range of 33.5% year over year based on the current target. That's despite the impact of the large electronics brand leaving the platform, which speaks to Baozun's success at adding other large brand partners.

Some people covering the stock suspect that Chinese hardware company Huawei is the electronics company that left the platform. Based on Huawei's market-leading position in China and the impact of the referenced electronics company leaving the platform, that seems like a reasonable conclusion. Baozun's Singles Day 2019 gross merchandise volume grew 53.6% year over year, but it would have grown 76% if the former brand partner's contribution to sales during the shopping holiday last year was excluded from the comparison, so it's clearly a heavy hitter.

The departure is a meaningful setback, but losing a big domestic partner probably wouldn't be a troubling indicator in the same way that major Western brands departing the platform would be. Baozun's customer base is primarily built around Western brands -- and it can provide a lot more value to these companies than it can to domestic powerhouses like Huawei.

Baozun's strengths appear to be intact

Its list of major Western brands like Nike, Starbucks, and Coach (owned by Tapestry) -- among many others -- proves the trust in the value of its services. The fact that the company added 11 net new partners in the third quarter (reaching 223, up from 132 in the prior-year period) represents a vote of confidence that shouldn't be overlooked.

It's fair to point out that the company has relatively low margins, and that progress on that front has been slow. In fact, the company's margin fell to 5.1% in the third quarter, down from 5.5% in the prior-year quarter. This suggests that Baozun isn't making any real progress in raising services rates for brand partners, and may actually be cutting prices. For now, I don't think there's much to worry about with the business' land-and-expand approach, particularly in light of strong momentum for China's e-commerce industry and signs pointing toward long-term growth for the Chinese middle class and per-capita discretionary spending.

Baozun continues to enjoy a strategic partnership with Alibaba (NYSE:BABA), China's largest e-commerce player, as well as integration on sites like JD.com and Tencent's WeChat social media ecosystem. Alibaba also owns a 17% stake in the smaller company, and Baozun has privileged access to the e-commerce giant's data.

The company's investment in developing its mini-app platform for brand partners and building up its cloud and artificial intelligence infrastructure have pressured earnings growth, but they look like smart investments that fit with the market's demands and could have big payoffs. I also see long-term potential in the company's Nebula+ platform, which is targeted at small and medium businesses and has the potential to be a major growth catalyst if it gains favor with smaller Chinese companies.

The trade situation and slowing growth in the Chinese economy add reasons to be cautious about Baozun's near-term outlook. But there's still a lot of opportunity in the country's e-commerce market, and the business looks well-positioned to capitalize. And while it may sound counterintuitive to some investors, I also see defensive value in owning quality Chinese stocks as a vehicle for regional diversification.

Baozun is a stock that I plan on holding long term. Unless there are signs that the business' fundamentals and market opportunity are weakening, I'll continue to accumulate shares and think that the stock presents a worthwhile buy for risk-tolerant investors at current levels.