Please ensure Javascript is enabled for purposes of website accessibility
Free Article Join Over 1 Million Premium Members And Get More In-Depth Stock Guidance and Research
By Jason Lee - Dec 3, 2019 at 8:47AM

Weak financials and the absence of a turnaround plan for this action camera maker are alarming.

If GoPro's ( GPRO -3.70% ) historical stock price were an amusement park ride, you'd want to strap on a GoPro camera to catch all the action, because it's quite the roller coaster -- and fully equipped with a hair-raising drop. With shares down over 90% from their all-time high in 2014, investors and those looking to invest need to decide if this action camera manufacturer has seen its better days or if this is a discounted buying opportunity ahead of a turnaround.

Here are two questions that will help us answer the bigger-picture question of whether GoPro is a buy or a sell. 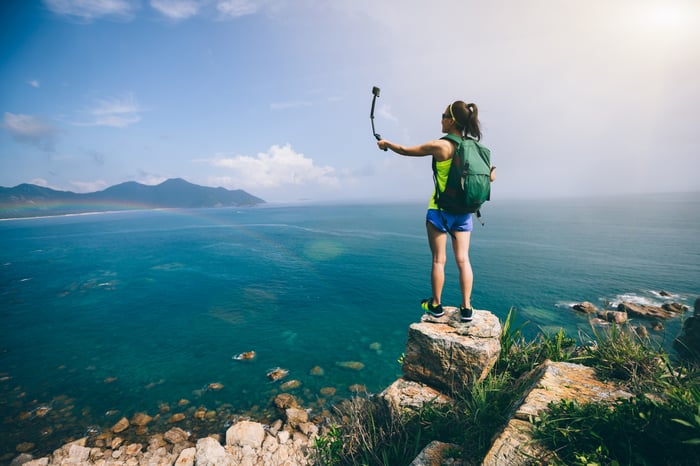 In Q3 of this year, GoPro's revenue was $131.2 million. This figure was down from $285.9 million in the prior-year period, a drop of 54%, and the second straight year of Q3 revenue declines. GAAP net income was a loss of $74.8 million, the seventh loss in the last eight quarters.

Additionally, cash and cash equivalents are down to $43 million, a 52.8% decline from the previous quarter, and a nearly 70% drop year over year. Long-term debt has grown to $143.8 million, an increase of 3.4% year over year. GAAP earnings per share were a loss of $0.51, worse than the $0.19-per-share loss in the same quarter last year.

Putting the pieces of that bleak laundry list together, you've got a company bringing in way less money, burning through its cash reserves while piling on debt, and delivering increasingly worse results to shareholders.

Is there a plan to get back on track?

Whether you are bullish or bearish on GoPro, we can all agree its most recent results are not favorable. But that does not necessarily mean the stock isn't a buy. If there are clear plans for a turnaround and the market has overreacted to the negative numbers, you may have a great value buy.

Here's the problem. GoPro's plan going forward is business as usual, and business as usual for the past few years has been awful. The company's earnings call was chock-full of praise for early sales numbers for the HERO 8 and MAX cameras, the company's newest offerings. That's all well and good, but analyst Erik Woodring from Morgan Stanley brought up a great point during the question period of the last earnings call, stating, "You provided some really bullish data points about early sales of the HERO 8 and the MAX on GoPro.com. But the last quarter you said it was roughly 10% of sales."

The heart and soul of GoPro's big turnaround push is only a fraction of its sales. Management's response to the comment and question did not provide much other than positive language about the brand and sales with no supporting data points. Unfortunately, that happy talk doesn't line up with the 54% drop in revenue. The company does attribute some of the revenue decline to a temporary production delay pushing some revenue from Q3 into Q4.

GoPro has addressed concerns of how to find recurring revenue with customers through its subscription-based service, GoPro PLUS. According to the company, as of Nov. 4, 2019, it had 305,000 active paying subscribers. At a price point of $4.99 per month, that breaks down to about $1.5 million in monthly revenue. The company reported this increased 66% year over year.

While this is certainly positive, it's still small potatoes compared to total revenue, and there are concerns about how large the interested customer base is for the service. For simplicity's sake, if we assume GoPro had 305,000 customers for all three months of Q3 (which it did not), that would make up 1.1% of the company's revenue.

During GoPro's earnings call, management said its bearish expectation is to exit 2020 with 600,000 to 700,000 active subscribers. At the high end of that forecast, that's $3.49 million monthly or $10.5 million quarterly. Again, positive movement, but still a relative drop in the bucket compared to the company's total revenue. GoPro PLUS members also get discounts on accessories, access to a soundtrack library, and premium support, all of which will cost the company money to provide.

Here's the bottom line: Effective turnarounds have a clear road map to get back on track that includes acknowledgment of prior issues and specific changes about how to correct them. Unfortunately, I don't think GoPro has even begun to provide the framework for this.

Is GoPro a buy?

As you've probably guessed already, GoPro is not a buy. If you're a current investor, getting out of GoPro might also be a wise move.