Please ensure Javascript is enabled for purposes of website accessibility
Free Article Join Over 1 Million Premium Members And Get More In-Depth Stock Guidance and Research
By Jon Quast - Dec 3, 2019 at 9:33AM

New restaurant locations and a faster drive-thru are parts of the plan to grow the business.

Investors in Jack in the Box ( JACK 0.95% ) went on a ride in 2019. It wasn't a volatile ride -- the stock has traded sideways. Rather, it was an emotional ride. After exploring strategic options, the company ultimately opted not to sell itself, and is searching for alternative ways to reward shareholders. Furthermore, it's now completely done with its other brand, Qdoba, once seen as its primary growth vehicle.

With these transformative decisions behind it, Jack in the Box has laid out its business plan. No matter what you think of its burgers, it's important to know whether the ride will be better in 2020 and beyond. 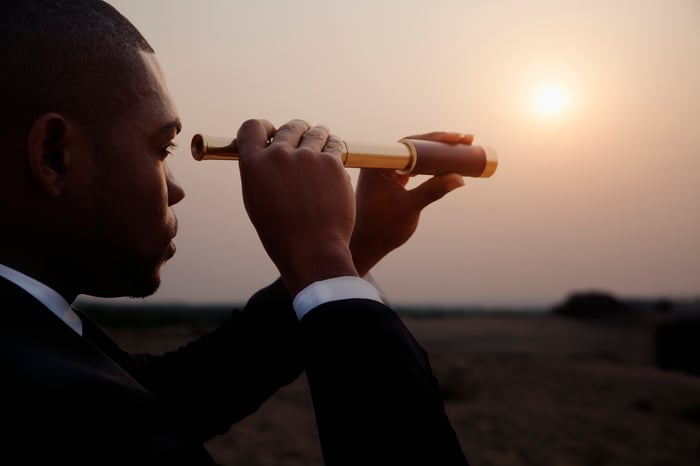 Late in 2017, rumors emerged that Jack in the Box had reached an agreement to sell the Qdoba Mexican Eats brand to Apollo Global Management. Those rumors came to fruition in March of 2018, with Jack in the Box selling the chain for $305 million. The agreement included a transition period in which Jack in the Box provided certain services related to technology and the supply chain, but in September, its relationship with Qdoba officially ended.

Chipotle Mexican Grill had its initial public offering in 2006, and since then the price has increased over 1,700% -- one of the best growth stocks over that time. That sustained success turned many heads, and many investors looked to invest in Chipotle-esque alternatives; for a time it was common to hear terms like "the Chipotle of pizza" or "the Chipotle of pasta." But alternative burrito investments were also hot. Qdoba was one of those alternatives, and a big part of any investment thesis for Jack in the Box. When Jack in the Box first purchased the Qdoba brand in 2003, it had only 85 locations. But during the 15-year partnership, Jack in the Box grew Qdoba to a chain of more than 700 locations.

For some reason, Jack in the Box operated its two chains differently. The namesake restaurant concept was primarily a franchised chain, while Qdoba leaned more toward company-owned; therefore it required a lot more capital to grow Qdoba. What's more, a company-owned model, despite its benefits, weighs heavier on a company during lean business times. Those times did hit, and the Qdoba brand began struggling with slumping comparable sales. This overshadowed the company's otherwise strong performance, in which it grew comparable sales for nine consecutive years.

But that's all in the past. From here, an investment thesis acknowledges that Jack in the Box is a one-brand business.

Jack in the Box has set an interesting goal: to shave one minute off its drive-thru times by 2021. That might not sound like a big deal, but 70% of all the chain's transactions come through the drive-thru. Think of your own reaction to a long drive-thru line: The temptation to go somewhere else is strong. It stands to reason that a faster line increases drive-thru traffic, which in turn increases comparable sales.

Yet shaving an entire minute off drive-thru times is hard. Consider that about 70% of McDonald's ( MCD 0.21% ) U.S. sales, like those at Jack in the Box, come from the drive-thru lane. McDonald's is also trying to become faster there; it went out and acquired Dynamic Yield for $300 million with the goal of improving drive-thru efficiency. Now implemented at nearly all its U.S. locations, Dynamic Yield has helped make McDonald's drive-thrus faster, but only by "double-digit" seconds so far.

Having fully shed Qdoba, the company wants to accelerate unit growth in its namesake chain. In 2019 it opened 19 new locations, but it also closed 13. Six net openings mean less than 1% unit growth, since Jack in the Box currently operates 2,243 locations. This coming year it plans to open 25 to 35 new locations, with unit growth accelerating further after that.

Another initiative is a plan to buy back 30% of its shares over the next five years; at today's share price, that's a buyback plan of around $600 million. The company made excellent progress by buying back $125 million of shares in the fourth quarter alone. The stock currently trades at around 15 times forward earnings, and that valuation will become more attractive as Jack in the Box buys back more shares.

Over the next year, I'll be watching three things. First, I'll be keeping an eye out not for gross restaurant openings, but for net openings. I don't want to only see new openings accelerate, I want to see closures decelerate.

Second, I'll look at comparable sales, and with those, drive-thru times. If that's where management wants to focus, then drive-thru times do need to get better -- maybe by 30 seconds by the middle of next year.

And lastly, I'll be watching earnings per share. At the rate the company is buying shares, any dip in EPS would be a warning sign that the plan isn't working.