Backlash against a recent ad seemed to cause the stumble.

Shares of Peloton Interactive ( PTON -2.02% ) were falling back today in an apparent response to negative publicity over its recent holiday ad. Shares of the maker of the expensive interactive exercise bike had risen steadily through November in anticipation of a strong holiday season, but investor sentiment seemed to reverse today in a possible sign that the stock had been overbought. 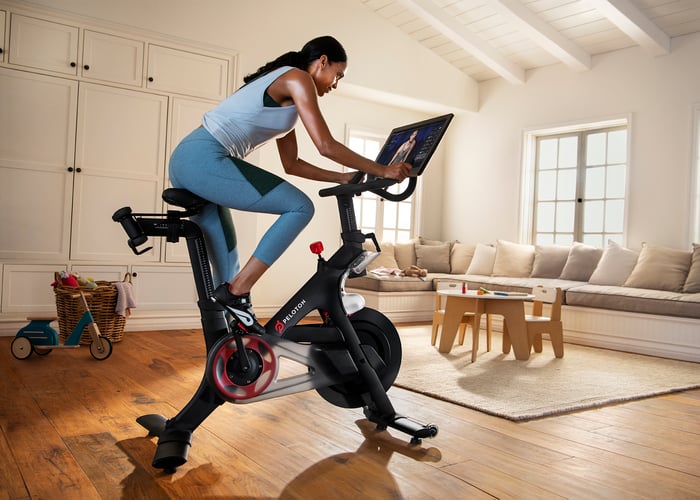 The video ad, which depicts a woman being gifted a Peloton bike by her husband, was posted on YouTube on Nov. 21 but went viral on Twitter yesterday.

At time of writing, it had racked up nearly 9 times more thumbs-down (6,700) than thumbs-up (761) votes. Commenters had a litany of complaints, arguing that the gift itself was in poor taste and that the woman already seemed in shape before receiving the bike despite talking about "her journey" over the past year. Here's a sample of the reaction:

We all need to treasure the things that bring us together as a nation, as a people. Collectively hating on this Peloton ad is that thing. pic.twitter.com/UQtUU4CCQt

It's clear this woman doesn't need a Peloton. She needs a good therapist and a divorce lawyer. https://t.co/II7F0HicAE

Sorry to shake things up but I'm excited to announce I'm throwing my hat in the ring and joining the presidential race and running on the single issue platform to jail everyone involved in the pitching, scripting, acting, shooting, and approval of the Peloton ad.

The ad clearly seems to be a PR miss, at least for the chattering class on Twitter. But the movement in the stock is more likely in response to the recent run-up in Peloton shares and the fact that it has become a battleground stock after shares touched an all-time high yesterday on reports of strong Black Friday sales and a number of bullish comments from analysts.

Peloton's volatility is likely to continue, as 66% of the stock is sold short, indicating most investors expect the stock to fall. The company is putting up strong growth, with sales doubling in its most recent quarter to $228 million, and it expects roughly 61% revenue growth for the full year to $1.45 billion to $1.50 billion. However, the company is not profitable.

Keep an eye on its next earnings report, because the holiday season is key for the interactive fitness specialist. The backlash from the ad is likely to blow over, but fundamental questions about the company's business model and its addressable market for the luxury product remain.