Amgen (NASDAQ:AMGN) and Pfizer (NYSE:PFE) have both proven to be outstanding income, value, and growth plays over the last decade. However, the next decade could be a bit more bumpy for these two titans of the pharmaceutical industry. After all, Amgen and Pfizer are both facing key patent expirations heading into the 2020s, as well as an increasingly uncertain reimbursement landscape in the United States.

Which of these top biopharmas is best equipped to overcome these headwinds? Let's consider how these two stack up on several key areas to find out. 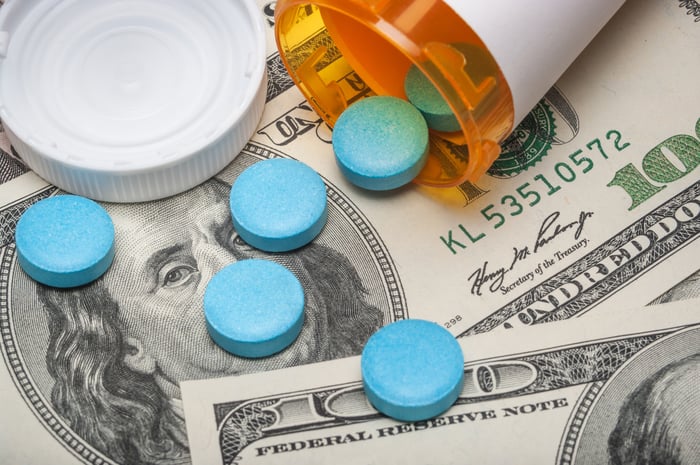 Amgen is undergoing a dramatic makeover at the moment. Former powerhouse medicines like Sensipar and Neulasta are quickly fading into the background, while newer products like Aimovig, Repatha, and Kyprolis are all starting to take over as the biotech's most important revenue generators. Amgen has also built out a well-rounded portfolio of biosimilar products over the past few years, which could prove to be a major source of growth for the company in the coming decade.

Even so, Amgen has continued to add pieces to the puzzle this year. In order to shore up its immunology franchise, the biotech paid top dollar to acquire the psoriasis medication Otezla, and it recently struck an intriguing partnering deal with BeiGene to gain broader access to the high-growth Chinese pharma market.

What's noteworthy about these two transactions is that Amgen's top line is now expected to grow by at least 3% on average for the next three consecutive years. Prior to these two deals, the biotech's revenue was forecast to essentially flatline in the first half of the 2020s.

Still, Amgen isn't quite out of the woods on the patent expiry front. Even more drugs could lose patent protection by the middle of the next decade, depending on the outcome of ongoing legal disputes. Fortunately, the company does have an outstanding roster of mid- to late-stage clinical candidates in development, including the novel anti-cancer agent AMG 510.

Pfizer is definitely a work in progress. The company is set to morph into a growth-oriented, branded biopharmaceuticals business following the upcoming merger of its Upjohn segment and generic drug giant Mylan in mid-2020.

Pfizer, as a slimmed-down biopharma company, is expected to grow its top line at a healthy 6% on average for the next five straight years, fueled by a bevy of top brands like Ibrance, Xeljanz, Eliquis, Vyndaqel, Inlyta, and Xtandi. To complement this potent lineup, the drugmaker is also working toward gaining key regulatory approvals across several high-growth areas, including hemophilia, immunology, growth hormone deficiency, metabolic diseases, and a multitude of cancers.

On the speculative side of things, Pfizer appears primed and ready to pursue more business development deals. The long and short of it is that the drugmaker arguably needs to add a few superstar candidates to its pipeline, especially with another round of patent expirations set to take place in 2026. The good news is that Pfizer does have one of the highest financial capacities for deal-making in the industry, despite its spate of recent high-dollar acquisitions over the last few years.

In this head-to-head matchup, Amgen arguably stands out as the better buy for two reasons. First, Amgen is much further along in its metamorphosis than Pfizer. Pfizer could end up being the better buy at the end of the day, but there's far too many moving parts to predict where this pharma titan might land even one year from now. Amgen, on the other hand, is simply rounding out the edges at this point.

Second, Amgen has a not-so-obvious edge in the clinic. While Pfizer's pipeline is chock-full of healthy growth candidates, it lacks star power -- in effect, a drug capable of generating multibillion-dollar-a-year sales. Amgen's AMG 510, by contrast, has the potential to rake in sales in excess of $2.3 billion. Now, Pfizer might change this situation sometime soon through a bolt-on acquisition. But Amgen clearly has the advantage as things stand now.