Consumer staples manufacturer Campbell Soup Company (NYSE:CPB) continued its divestment of nonperforming and noncore businesses in the first quarter of its fiscal 2020 year. The consumer packaged goods (CPG) stalwart sold its European chips business to privately held Valeo Foods in October, which reduced current-quarter sales and earnings in the report released Wednesday morning. Outside of this deal, the company presented a mixed quarter to investors, as strength in snacks was offset by weaker sales in Campbell's meals and beverages segment.

As we walk through important details from the last three months, note that all comparative numbers are presented against the prior-year quarter.

The first quarter: A bird's-eye view 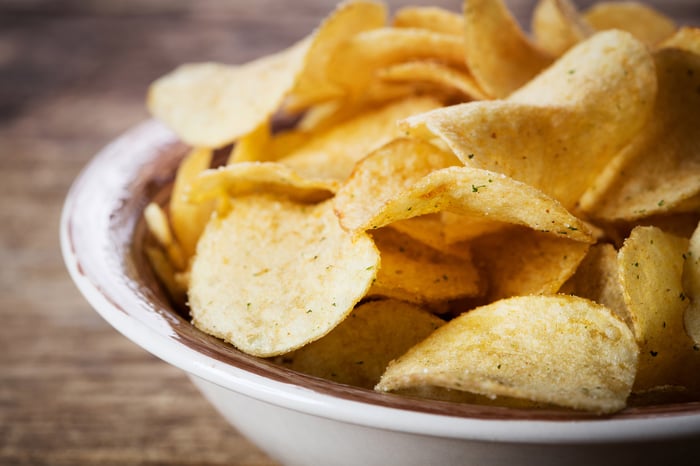 Our performance to start the new fiscal year was largely in-line with our expectations and builds upon the solid foundation we set in fiscal 2019. I was especially pleased that our in-market consumption grew more than 1% in measured channels. Additionally, we grew soup share for the first time in 10 quarters, one of the early signs of progress in our three-year journey to revitalize this business. Strong in-market consumption on U.S. soup was offset by the timing of shipments related to the Thanksgiving holiday. In Snacks, we delivered another quarter of strong marketplace performance with 8 of 9 power brands growing or holding share, while we continued to make steady progress integrating the business and delivering cost synergies.

An adjustment to the 2020 outlook

To incorporate the effect of its European chip business disposition, Campbell reduced its full-year sales projection by 2 percentage points. The company now expects sales growth of -1% to +1% against fiscal 2019 revenue of $8.1 billion, versus previous guidance of 1% to 3% growth. The change doesn't impact organic sales guidance, which still anticipates -1% to 1% growth.

The sales projection revision also won't impact Campbell's fiscal 2020 earnings outlook. The company still expects adjusted EBIT (earnings before interest and taxes) to expand by 2% to 4% over the $1.27 billion in adjusted EBIT generated in fiscal 2019. Similarly, its adjusted EPS projection remains at $2.50 to $2.55. Shareholders appeared pleased with both the quarter's results and the reaffirmation of Campbell's EPS outlook, as shares were higher by roughly 2% in midmorning trade on Wednesday.