Following the last divestment within its Campbell Fresh business, the company has discontinued the segment to focus on core offerings.

Shares of consumer packaged-goods (CPG) conglomerate Campbell Soup Company (CPB -2.61%) were bid as much as 9% higher on Wednesday after the company reported brighter third-quarter earnings results versus the prior year and tweaked its earnings outlook in a positive direction. Following several quarters of acquisitions and dispositions (that we'll touch on below), the company appears to be settling into a model in which it can focus on sales and profit optimization. Note that all comparative numbers in the discussion that follows are presented against the prior-year quarter.

What happened with Campbell Soup Company this quarter? 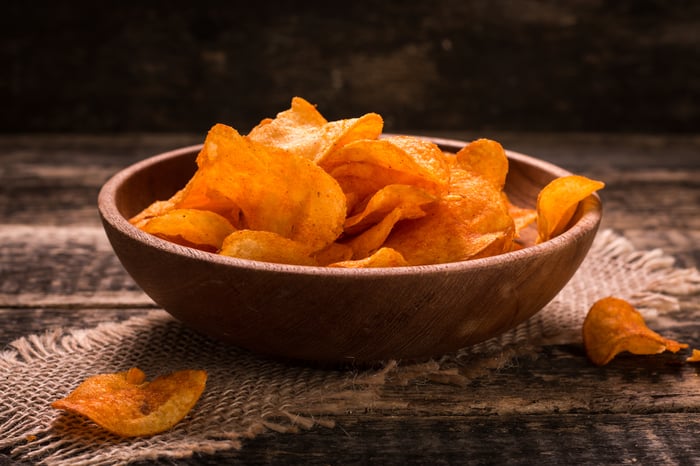 Given the popularity of clean-label ingredients and natural and organic packaged foods, it may seem counterintuitive that Campbell is beginning to thrive after discontinuing its Campbell Fresh division and adding snacks to its arsenal. Shareholders should first bear in mind that core indulgent snacks, often high in salt, are actually thriving in the CPG arena. Though Campbell experienced initial pricing and execution issues shortly after its late March 2018 purchase of Snyder's-Lance, the portfolio now appears to have moderate growth potential, for the most part.

Second, as I discussed last year, the Campbell Fresh segment was plagued by execution issues from the start and represented a well-intentioned but ultimately costly foray into healthier products for the company. Efforts to provide healthier, "better for you" products are now focused within Campbell's two remaining segments.

In Campbell's earnings press release, CEO Mark Clouse pointed to the momentum in these two divisions and also noted progress in pushing up profitability:

Our results this quarter were ahead of our expectations, making it the third consecutive quarter that we met or exceeded our outlook. I am also pleased to see profitability trends are improving, driven by sequential gross margin improvement.

In the quarter, we continued to drive sales growth in Global Biscuits and Snacks, fueled by our U.S. Snacks portfolio. The business continues its growth trends on Pepperidge Farm, coupled with improvements in the Snyder's-Lance portfolio. In the Meals and Beverages segment, although there is more to do, we are making steady improvements on gross margin and profit and this business is showing signs of stabilization.

To account for lost revenue from the discontinued Campbell Fresh segment and to acknowledge higher earnings potential through the final quarter of the year, Campbell revised its fiscal 2019 guidance alongside earnings on Wednesday. The company now expects full-year revenue to land between $9.08 billion and $9.13 billion, against the previous range of $10 billion-$10.1 billion.

3 Stocks That Make Your Favorite Snacks
410%