Please ensure Javascript is enabled for purposes of website accessibility
Log In Help Join The Motley Fool
Free Article Join Over 1 Million Premium Members And Get More In-Depth Stock Guidance and Research
By Asit Sharma - May 24, 2018 at 5:35PM

A few potential corporate actions are equally important as finding a replacement for its recently departed CEO.

Campbell Soup Company's (CPB -0.72%) fiscal third-quarter 2018 earnings, released on May 18, revealed a precipitous drop in gross margin, from 35.9% one year ago to 29.1% last quarter. This unexpected breakdown in profitability likely is one of the chief factors behind the abrupt retirement of CEO Denise Morrison on the day of the earnings announcement.

The company blamed the poor gross margin of the last three months on cost inflation, a dilutive impact from recent acquisitions, increased promotional spending, and higher supply-chain costs in the Campbell Fresh segment. Those higher costs within Campbell Fresh provide a compelling bit of detail that hints at a larger issue that had long plagued Morrison's tenure as chief of the consumer-goods giant. Since the company's acquisition of carrot and juice beverage provider Bolthouse Farms in 2012, it's repeatedly fallen short of revenue and operating targets related to this move into fresh foods.

Campbell's expertise as a manufacturer of packaged, shelf-stable goods didn't translate well as it dove into the farm business. The organization encountered problems almost from the start with declining carrot yields. Further, high supply-chain costs related to the complexities of moving product in a cold chain from harvest point to grocery stores hurt segment profit margins.

This quarter, the company took a significant $619 million impairment charge on intangible assets in the Campbell Fresh segment -- surely another factor in Morrison's decision to exit now and retire. 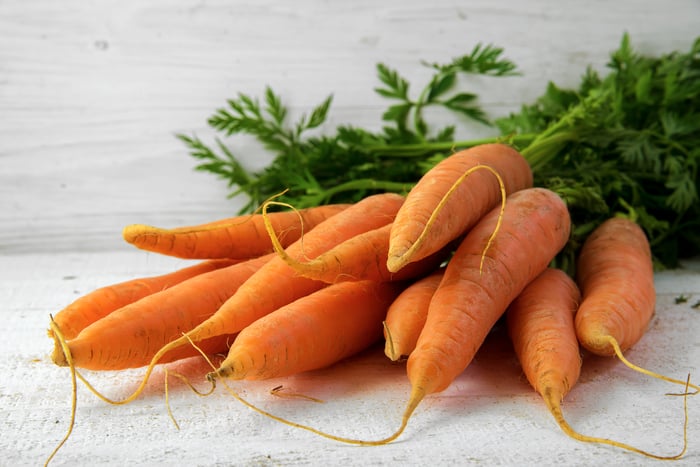 Time to move forward, but how?

As interim CEO Keith McLoughlin and the board of directors search for a replacement for Morrison, several structural items will need to be addressed regardless of who ultimately helms the venerable soup maker. Chiefly, Campbell Soup should consider divesting the Campbell Fresh division from operations. To give you a little more detail, per the company, this division encompasses "Bolthouse Farms fresh carrots, carrot ingredients, refrigerated beverages and refrigerated salad dressings; Garden Fresh Gourmet salsa, hummus, dips and tortilla chips; and the U.S. refrigerated soup business."

Campbell acquired Bolthouse Farms at a price of $1.55 billion. It snapped up Garden Fresh Gourmet for $231 million in 2015. Of this nearly $1.8 billion investment in fresh foods, Campbell has written off $972 million in impairment charges against goodwill and intangible assets of the acquired businesses, inclusive of this quarter's impairments.

Thus, the company has already charged off more than half the purchase price of a division that accounts for roughly 12% of total company sales. The business has never really made a positive impact on earnings, however. Last year, Campbell Fresh booked an operating loss of $9 million on close to $1 billion in sales. It's time to call it quits on a revenue stream that was much more complicated than management anticipated and put the division up for sale.

Should Campbell Soup now look to purchase more growth? Acquisitions of small brands to jump-start revenue expansion may be a viable use of resources in the future, but for now, management should probably focus on integration tasks in its recently completed, $4.6 billion acquisition of snack foods company Snyder's-Lance.

When this merger was announced last December, I pointed out that Snyder's-Lance's poor margin profile and questionable strategy for firming up product pricing made it a risky bet for management to undertake, notwithstanding the foothold in the fast-growing snacks category that this merger brings to Campbell. Not surprisingly, after eight weeks as owner of Snyder's-Lance, the company relayed to investors in its earnings conference call last week that it's "uncovered" some short-term issues, including margin pressure, as Snyder's-Lance's price realization strategy "did not materialize." See here for a detailed analysis on why this was a plausible -- and not surprising -- outcome.

So Campbell's current and future management should expend the time and effort to ensure that projected deal synergies are realized and that Snyder's-Lance doesn't become another Campbell Fresh -- that is, an immense wager that ultimately drags on the bottom line.

Finally, Campbell Soup Company perhaps should consider trimming overhead in a more drastic fashion than that supplied by its ongoing productivity program, which seeks to reduce costs throughout the company's supply chain by 3% annually. Such a task may fall to recently appointed COO Luca Mignini, who was handed a wide portfolio and the latitude to accelerate execution throughout the organization's operating segments just weeks before the resignation of Morrison.

Somehow, the company must signal to investors that it's committed to stabilizing and improving margins in the absence of credible organic revenue growth. Significant near-term cost-cutting, never a pleasant exercise, may be one of the few means left to exhibit this commitment and in turn, restore investor confidence.