Read the headlines, and it seems like the group of so-called FANG stocks are in some serious trouble. If Facebook (NASDAQ:FB), Amazon.com (NASDAQ:AMZN), Netflix (NASDAQ:NFLX), and Google parent Alphabet (NASDAQ:GOOG)(NASDAQ:GOOGL) aren't facing a host of bureaucratic and regulatory decisions abroad that could dent their wallets, they are being challenged by potentially powerful competitors. And closer to home, most are under scrutiny because of the immense power and influence they wield in the economy and society.

Shares of the tech stocks, however, don't seem to have absorbed much of the impact. Facebook and Alphabet exceed the returns of the S&P 500 so far in 2019, and Amazon and Netflix only trail the index by a little. With price-to-earnings ratios ranging from 28 to 100, double-digit returns this year, and global conundrums, investors may think the good run that the stocks have enjoyed is coming to an end.

But here's why you should still consider investing in FANG stocks in 2020 and beyond. 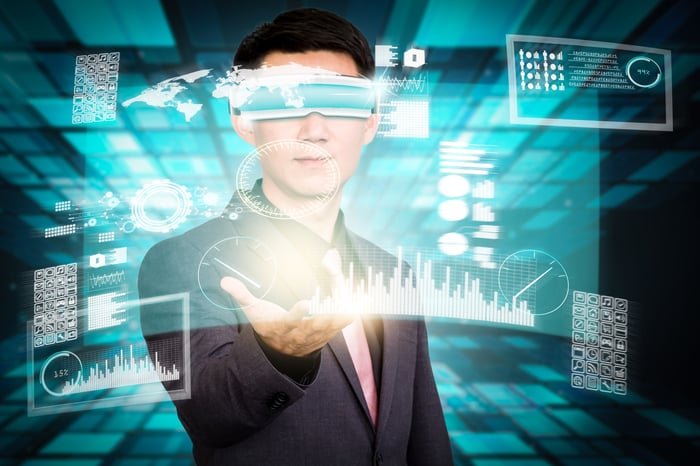 Artificial intelligence and augmented or virtual reality inform the future for many of the FANG stocks. Image source: Getty Images.

Facebook, above all others, has performed the best this year, bounding 54% higher (twice the gain of the market index). It continues to set new record highs.

It's a big recovery from the year-ago period, when it severely lagged this group of stocks, dragging it lower. In fact, on a two-year stack, Facebook still trails the other FANG stocks and the S&P 500.

In October, a European court ruled that the social media site had to take down global content found malicious in one country. It also was just required to add a footnote to a post in Singapore that the government objected to. In the U.S., it deployed fact checkers to monitor posts on its site.

Yet in the face of such threats to free speech, Facebook's influence continues to grow as daily and monthly average users climb inexorably higher. The social media site keeps its members engaged, and that is incredibly valuable, allowing revenue to accelerate for two straight quarters because of its increasing penetration in foreign markets.

But Facebook is also branching out into new avenues, such as artificial intelligence (AI) and virtual reality (VR). It just purchased VR game developer Beat Games through its Oculus division. Believe it when Facebook says, "This is just the beginning."

Amazon: Too big to fail

Amazon is also facing scrutiny by the EU about its use of third-party data, along with questions about privacy through its Alexa-enabled devices.

As with Facebook, politicians and regulators in the U.S. are also looking closely at the e-commerce giant. Calls to break up the company continue to mount as the presidential election nears, with candidates arguing it has gotten too big. While a breakup is not likely anytime soon, the company has become a common target of criticism from both parties, as employee eavesdropping on conversations through AI devices was revealed.

Amazon's stock has pulled back a little from its all-time highs. But with the holidays upon us, sales will likely explode higher again -- all while its cloud-based Amazon Web Services continues to profitably grow.

Netflix might not have regulatory woes like the other FANG stocks, but it faces pressures here and abroad from competition. New streaming services from Apple and Disney provide tough rivals that it hasn't faced in years. And there will be more coming in 2020.

The biggest challenge may be the loss of content as the competing services seek to keep their movies and TV shows exclusively to themselves. It means Amazon is now spending tens of billions of dollars annually to acquire content, not all of which is resulting in quality shows. The risk is that in going for quantity, Netflix subscribers may decide the new services could be a better option.

Although the streaming-video giant has worried investors numerous times that its user growth would be irreparably harmed, it has also often bounced backed to show it can't be counted out. More importantly, it looks like no one is canceling their Netflix accounts to jump to Apple or Disney.

While it's still the early days for those services, and viewers could be simply giving them a test run to determine whether they'll commit to a subscription, Netflix is a service that subscribers know they can rely upon, and it will remain part of their core cord-cutting strategy.

Alphabet's Google is yet another of the tech leaders running afoul of Europe's regulatory regime, getting slapped earlier this year with a fine of 1.49 billion euros ($1.64 billion) for breaching the EU's antitrust rules.

Europe isn't exactly a bastion of free-market thinking, as it often buries businesses under a daunting regulatory regime. But Google is one that seems to get dinged a lot, though that's likely the result of it also being the biggest search engine by far. It's easy to snipe at it.

But it also is being targeted in the U.S., and recently agreed to pay a $170 million fine to the Federal Trade Commission for allegedly violating child privacy laws. It has now vastly updated its YouTube service to comply, but it means many of the platform's most popular channels will be demonetized if their videos are geared for kids. That could cause many creators to abandon YouTube, and it may revert back to being a place for funny cat videos.

Yet the advances in technology also mean that search and homemade video are not the only things it's interested in, and Google has vastly diversified itself away from looking up things on the internet. It's also why the company is called Alphabet today and not just Google, and it has numerous divisions, each responsible for varied interests.

Also like others in the FANG crowd, Alphabet is delving into AI, VR, and augmented reality (AR) whether it's for individual, commercial, or industrial use.

All these initiatives have combined to make it a massively successful company still growing revenue and profits. Arguably, they'll become even more important to Alphabet in the years ahead.

Sink your teeth into these stocks once more

Ever since being coined FANG stocks by Mad Money host Jim Cramer six years ago, the stocks have collectively trounced the market index's returns, and in some cases exceeded the S&P 500's gain by more than sevenfold.

Facebook, Amazon, Netflix, and Alphabet all retain significant competitive advantages, even in the face of adversity, that make their stocks bankable for the foreseeable future.