Shares of Qiagen ( QGEN -0.66% ) jumped 43.6% in November, according to data provided by S&P Global Market Intelligence, after the maker of scientific and diagnostic tests said that it was considering a potential sale of the company.

Bloomberg initially reported that Thermo Fisher Scientific ( TMO 1.36% ) was looking to acquire Qiagen, although it cited unnamed sources, and the companies weren't willing to confirm that they were in talks.

And then a few days later, Qiagen acknowledged that it had received several "indications of interest" to be acquired and was exploring strategic alternatives.

After a rocky third quarter, a transition in the CEO position, and a pivot in next-generation sequencing sent Qiagen down 20% in October, it's not surprising that Thermo Fisher or some other big science and diagnostic outfit might want to swoop in and buy the company's assets on the cheap.

There's certainly been plenty of consolidation in the industry with companies looking to save money on redundancies like sales forces. Thermo Fisher is, of course, the result of the merger of Thermo Electron and Fisher Scientific. 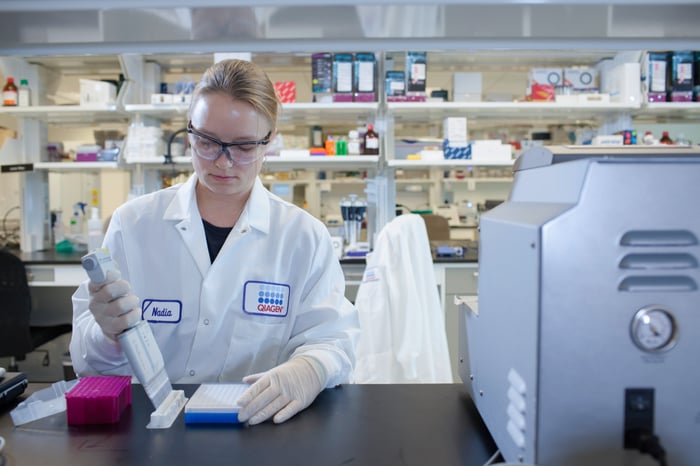 While an acquisition of Qiagen makes sense, there's no guarantee that management can find a buyer willing to pay what Qiagen's board believes it's worth, especially with uncertainties around how the new next-generation sequencing partnership with Illumina ( ILMN -2.85% ) will work out. Arguably, that partnership could throw a wrench into acquisition plans, considering that Thermo Fisher has its own next-generation sequencing platform called Ion Torrent.

If a deal does end up getting done, investors shouldn't expect much of a premium from here given that shares have already largely priced in a potential sale. Qiagen was a great -- albeit risky -- buy after the October drop, but at this point, investors looking for new investments should probably look at other healthcare companies.