Over its several decades of existence, Starbucks (NASDAQ:SBUX) has turned the concept of the corner coffee shop on its head, spearheading and dominating a new coffeehouse industry. It's done this with the clear objective of using all available innovations to push boundaries outward, and it's using artificial intelligence to break open new channels in sales.

Former CEO Howard Schultz, who led Starbucks to its current success, left the company in the hands of current CEO Kevin Johnson in April 2017. Johnson comes from a technology background, rather than food or consumer goods, sending a strong signal about where this consumer discretionary stock is going and how it's going to get there. 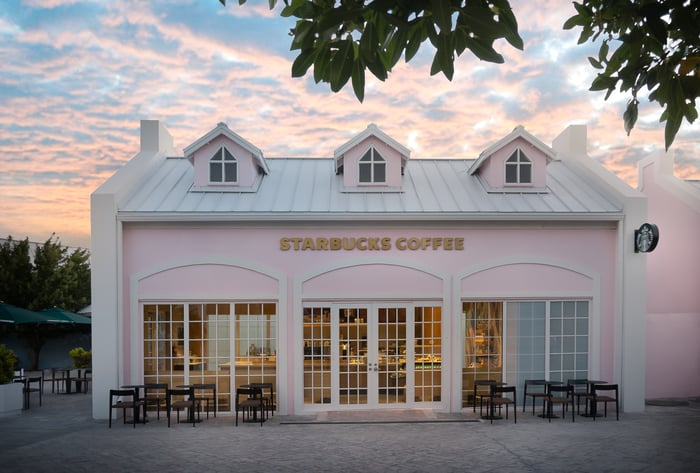 Starbucks is partnering with Microsoft (NASDAQ:MSFT) in using data to heighten customer experience. Starbucks chief technology officer Gerri Martin-Flickinger said: "As an engineering and technology organization, one of the areas we are incredibly excited to be pursuing is using data to continuously improve the experience for our customers and partners."

It's interesting that she calls her company, which produces coffee, an engineering and technology organization; it says a lot about the way management thinks. But Martin-Flickinger also points out that the goal of technological innovation is a personal one: When the baseline is taken care of, the employee has a greater opportunity to connect with the customer.

How does this all work? When customers use the mobile app, the company collects data about their preferences. Combining this with knowledge of Starbucks shops in the area, local popular drinks, the weather, and other factors, it can offer recommendations for both products and pairings.

While this has already gone into effect for mobile, the Starbucks team is also testing it out with its drive-thru service. Since drive-thru doesn't use the mobile app, the system uses factors other than personal customer choices to make recommendations that show up on a digital menu.

"We're meeting our customers where they are ... using machine learning and artificial intelligence to understand and anticipate their personal preferences," says senior vice president Jon Francis. "Machine learning also plays a role in how we think about store design, engage with our partners, optimize inventory and create barista schedules. This capability will eventually touch all facets of how we run our business."

Voice-order delivery in the U.S. and China

One of Starbucks' advanced capabilities is its mobile order-and-pay app, with which customers can order on their phones, prepay, and then pick up their orders from their local Starbucks shop. This is now the second most popular mobile-payment app (behind Apple Pay) based on user totals, so customers are clearly liking and benefiting from it.

In addition to the order-and-pay app (which is becoming standard for many large companies), Starbucks added voice ordering -- through both the app and Amazon Alexa virtual assistant -- in 2017.

Another new element of the mobile program is a pickup-only store recently introduced in New York City's Penn Plaza. The store works together with the app, and customers simply choose that location to pick up their selections with minimal barista/customer interaction.

"Our customers who are on-the-go have told us that connection and convenience are important to them," said Katie Young, vice president of Urban Markets, in a press release. "By designing a store specifically for the mobile order occasion, we can deliver both for these customers using the store's design, location and the expertise of our baristas."

One of the most productive ways Starbucks uses its AI capabilities is to give customers the products they most want. Because of the nature of its quick-serve business, Starbucks can easily change its menu and tweak it to match the most current product trends from customers. It can calculate when to introduce new seasonal drinks, such as holiday options, and then remove them when demand wanes, offering up the next batch of whatever's hot (or cold) at the moment.

It can also try out new ideas without much risk, since it can quickly see what's selling and what's not, replacing poorly selling products with ones that are more popular.

Keeping ahead of competitors

Starbucks introduces all of these measures in an industry that it essentially controls in the U.S. Its most recent quarterly revenue of $4.6 billion, a 7% increase year over year, crushed those of its nearest competitors. And its share price reflects that.

Its closest direct competitor might be Dunkin' Donuts (owned by Dunkin' Brands Group (NASDAQ:DNKN)), with revenue in the most recent quarter of $356 million, or Tim Hortons (owned by Restaurant Brands International (NYSE:QSR)), with recent quarterly revenue of $881 million. Both of these companies, as well as smaller ones, also offer mobile apps allowing customers to pay for orders and then pick up. But none can match the scale of Starbucks, which has more than 14,000 U.S. locations and a total of approximately 30,000 stores worldwide.

Internationally, Starbucks faces some competition from Chinese coffee chain Luckin Coffee (OTC:LKNC.Y), which has many mobile express shops in China and has increased store count to 3,680 and has plans to exceed Starbucks store count within the next year in that country. Starbucks' technology efforts are what will help it weather this new threat in China.

So while Starbucks clearly dominates, it also knows that the competition, and new innovations, are always right behind it. And it's using whatever technology it can to maintain its hold on the U.S. coffee market.