Take advantage of e-commerce trends by investing in the king of online marketplaces, the leading e-commerce website builder, and a top payment processor.

Cyber Monday has come and gone and 2019 saw record highs as the total sales revenue consumers outlaid during the online shopping bonanza reached $9.4 billion, according to Adobe Analytics. Sales made from smartphones increased by 46% from last year, which further confirms Americans' love of online shopping on the go.

These important trends offer investors the chance to realize substantial profits by investing in quality companies that facilitate these online transactions. Here are three tech stocks that are great buys today.

This roundup wouldn't be complete without mentioning the largest player in the e-commerce industry: Amazon ( AMZN -0.00% ). Amazon had its biggest shopping day in history on Cyber Monday, with the site reporting that it sold millions of products including Eco Tvs, DNA kits, Hasbro toys, and more. 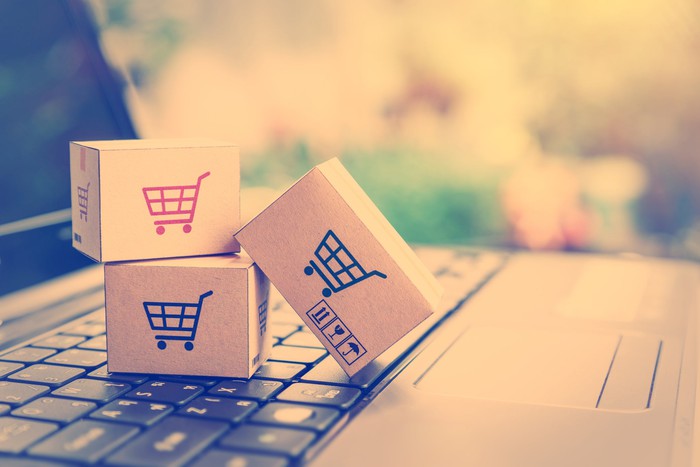 Amazon's stock trades around $1,770 per share, which is approximately $300 less than its 52-week-high of $2,035. Amazon has also seen an impressive three-year net income growth of 157%. Its multiple streams of income will help accelerate growth, especially Amazon Web Services, which helps companies with cloud computing and machine learning.

While these streams of income are impressive, it's important to pay attention to net profit margins and valuations. Currently, the P/E ratio of 78 is somewhat high and it has a relatively small net profit margin of 5%. Investors should be mindful of high valuations and low-profit margins before purchasing shares.

Like Amazon, Shopify ( SHOP -0.01% ) is another large player in the e-commerce industry. Shopify allows entrepreneurs to easily create their own websites and sell products online for a monthly subscription fee. Shopify was founded in 2004 by Tobias Lütke and Scott Lake as a way to help them sell snowboards online.

Frustrated with clunky technology, they programmed their own e-commerce platform to allow entrepreneurs to sell their own products online. The stock price has increased by a factor of 12 since the 2015 IPO and it's currently trading around $350 per share. Its three-year annualized revenue growth rate is 73.57%, which is higher than the industry average.

Shopify is also rolling out a new fulfillment network that is very similar to the Fulfillment by Amazon model. Business owners can send their products to Shopify fulfillment centers, which take care of customer service and sending the units to customers. This program will make it easier for merchants to send products to customers without needing large warehouses and it will lead to more revenue for Shopify via fulfillment and shipping along with other fees.

While Shopify has an impressive track record, it still hasn't turned a profit. Its 2019 free cash flow is negative $30.64 million. Despite this, it has low debt and a minimal debt-to-equity ratio of 0.04. Its new revenue sources and minimal debt could compensate for negative earnings over the long term.

The new fulfillment centers, add on features like various integrations with other selling platforms such as Printful and ease of use will propel it forward. These features also make it simple for entrepreneurs to increase revenue via upsells or selling a customer more products once they've purchased an initial one.

PayPal ( PYPL 3.31% ) is an online payment processor that facilitates online transactions for both product and service-based businesses. Its predecessor, Confinity, was founded in 1999 and merged with similar companies like X.com, which was founded by Elon Musk. PayPal also owns mobile payment app Venmo and international payment platform Xoom.

Out of the stocks on this list, PayPal is the most stable, with a net profit margin of 15%, a three-year net income growth rate of 18.76% and a relatively low debt-to-income ratio of 0.30. It doesn't have the hyper-growth of the former two, but it has room for upside potential since its current price is approximately $16 lower than its 52-week-high of $105.59.

On Nov. 20, PayPal announced it was acquiring a price history checker platform called Honey for $4 billion. Honey's exact financials aren't known, but it has roughly $100 million in revenue, is profitable and is rapidly expanding. Acquiring a profitable, high-growth company like Honey could help PayPal serve more customers, increase revenues, and diversify income streams.

It's no secret that online shopping has a large impact on consumer spending patterns. This trend has helped some businesses like e-commerce websites and payment processors push their growth to the next level. Yet, it's also threatened older more established industries like brick-and-mortar stores in the retail apocalypse.

You can choose to fear the retail apocalypse or profit from it by investing in the above companies. Out of these three stocks, PayPal is the best buy due to its acquisition of Honey, stable track record, and current price levels. It also has healthy profit margins and a solid three-year annualized growth rate. Investors who are shopping around for a deal in e-commerce would do well to buy PayPal today.