Trade war? What trade war? Consumers seemingly didn't give a hoot about tariffs driving prices higher as they were out there shopping like crazy over the holiday weekend. They spent $4.2 billion on Thanksgiving Day, $7.4 billion on Black Friday, $3.6 billion on Small Business Saturday, and $9.4 billion on Cyber Monday. All record amounts.

It bodes well for the rest of the holiday shopping season, so investors may want to take a closer look at these three retailers. They could be December's big winners. 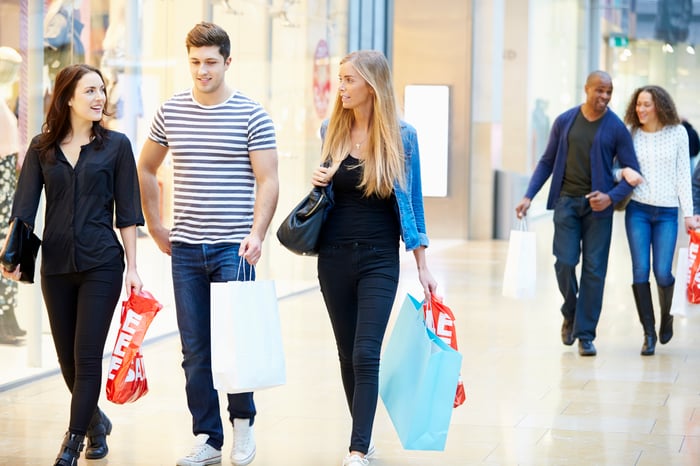 Target (NYSE:TGT) is off to a fast start already as analysts believe it sprinted out of the gate on Thanksgiving and never looked back. But the story really began last year, when the discount retailer began updating its inventory management system.

Although the later start to the Christmas season means retailers have six fewer shopping days this year compared with last, it also gave Target the opportunity to prepare for the onslaught of shoppers it expected to inundate its stores. Even though inventory levels were $1 billion below last year's third quarter because of the calendar shift, they were 8% higher than two years ago.

Coupled with the new system that better controls its inventory through the supply chain, it had 17% less items in the backroom, but more on its shelves.

The company also has invested heavily in technology. While originally late to the game in deploying digital initiatives, Target has spent a good part of the past decade making up for lost time. Along with Walmart, the mass merchandiser has become a premier destination for online shoppers, especially during the holidays, because it provides numerous opportunities to close the sale, like online ordering, in-store pickup (including same-day service), and delivery right from its warehouses.

Despite Target stock gaining 75% this year, it still trades at less than 18 times next year's earnings estimates and at a fraction of its sales. Having staked out an early holiday lead, look for it to pad its gains this month.

The success of Target is also why investors should keep an eye on Burlington Stores (NYSE:BURL), another retailer exploiting the sustained popularity of the discount market.

It has also refined its merchandising strategy to perfection, seeking out national brands and offering them at a discount. By stocking only a few items in each style, it encourages a treasure-hunt atmosphere popular among deep discounters. This keeps its merchandise in constant rotation and allows its buyers to have the latest fashions on hand without having too much in stock and getting stale.

Burlington also has plenty of room to grow. With 726 stores, it is the smallest of the national discount chains, giving it opportunities for expansion without having to worry about cannibalizing the sales of any of its existing stores.

The retailer just reported that third-quarter sales grew almost 9% on a near 3% rise in comparable-store sales, not an insignificant achievement since it was going up against a 4.4% increase in comps in the year-ago period. Adjusted profits widened 25% to $1.55 per share.

At 27 times estimated earnings, Burlington trades at a pricier valuation than Target, but analysts expect it to continue growing profits at 13% annually for the next three to five years, which is greater than even its bull's-eye peer. And while the retailer is more than just coats these days, the frigid temps that blanketed the Northeast with an early winter storm suggest Burlington will see a brisk business throughout December.

Delivering value at a discount

At the risk of belaboring the point, also keep an eye on Dollar General (NYSE:DG), the leading deep discounter that's in the middle of a major expansion. It is scheduled to open 1,000 stores this year after opening 1,000 last year. In a year when the retail industry is expected to close some 12,000 doors this year (a number even beyond the number that closed during the Great Recession), Dollar General is broadening its footprint.

And with good reason. The dollar-store chains have been a good bet for years because they offer a broad selection of merchandise at a good value. But more than that, they have gone beyond the cheap tchotchkes they were once known for and (especially Dollar General) now offer a growing selection of food and produce, both frozen and fresh.

The value proposition has been hard for consumers to ignore, and they continue to flock to Dollar General's stores. Also unlike many other retailers, it is able to grow comps based on rising foot traffic, not just from higher prices and a product assortment geared to more expensive items.

The deep discounter is also getting its inventory management practices better aligned and has brought its logistics operations in-house to more efficiently distribute merchandise to its stores.

Its stock is up 43% year to date, but still trades at less than twice its sales. Analysts have pegged Dollar General's long-term earnings growth at over 10% annually, suggesting it will continue to earn its share of consumer spending this December and for several Decembers to come.