When it comes to the initial buzz for Disney's (NYSE:DIS) new ride, it's fair to say that the Force is strong in this one. Star Wars: Rise of the Resistance at Disney's Hollywood Studios in Florida officially opened on Thursday morning, and the reporters, bloggers, and celebrities who got a sneak peek of the high-tech attraction earlier in the week were putting out glowing reviews across the board.

There were some initial reports of downtime in the days leading up to the grand opening (something that happens often with new bar-raising attractions in the industry), and the new Star Wars-themed ride lived up to the expectations of a bumpy debut. Rise of the Resistance opened nearly two hours earlier than the park's slated opening time to accommodate the massive crowd of early risers, but within an hour experienced the first of what will likely be many prolonged outages. Reliability can be a galaxy far, far away. 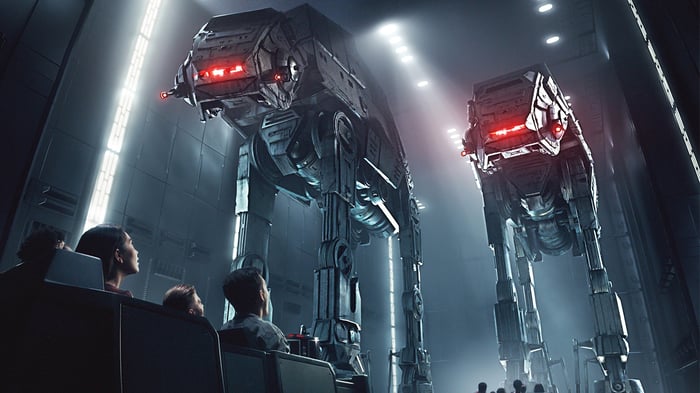 An artist's depiction of the new Star Wars: Rise of the Resistance ride. Image source: Disney.

It's a Jedi mind trick

Disney seemed to have a contingency plan in case things didn't go off without a hitch on Thursday. Earlier this week, it bombarded media outlets with updates of upcoming attractions at the massive Disney World resort:

Flooding the media channels with so many newsy nuggets on Tuesday night made sense, as Disney had plenty of journalists in town on the eve of the attraction's dedication ceremony. But it was probably also a shrewd tactic to distract from any negative coverage that the technologically advanced attraction would experience later in the week.

Star Wars: Rise of the Resistance isn't the first ride to not run smoothly out of the gate, and it naturally won't be the last. The first big test was winning raves from the first wave of riders, and it has clearly checked off that box. As long as the attraction's uptime improves over time, it should be the game changer needed by Disney World and, more importantly, Disneyland (which will introduce the same ride next month). It's better to have a great ride that isn't always available than a reliable ho-hum one.

There's enough riding on the new ride for Disney to put all of its resources into getting it running smoothly, and barring a recession (always a real possibility), this will be the ticket to reversing Disneyland's attendance woes and justifying the next wave of Disney World ticket price increases. Another popular sci-fi franchise called space "the final frontier," but for the House of Mouse, this is simply the beginning.