As it stands today, iRobot (NASDAQ:IRBT) collects the vast majority of its revenue (more than 90%) from its core Roomba robotic vacuum line. Though to be fair, the home-robotics leader is already working to diversify its top line; its newer Braava mopping bots should generate around $100 million in sales this year, or just over 8% of this year's expected $1.2 billion total, while its recently introduced Terra robot lawnmower is poised for a limited initial online launch next year (followed by a broader rollout in 2021).

But it's also no mystery that iRobot is continuously looking for new ways to simplify consumers' lives. In the past, company co-founder, chairman, and CEO Colin Angle has expressed interest in tackling tasks such as laundry folding, bathroom cleaning, and even opening doors to fetch delivered packages. 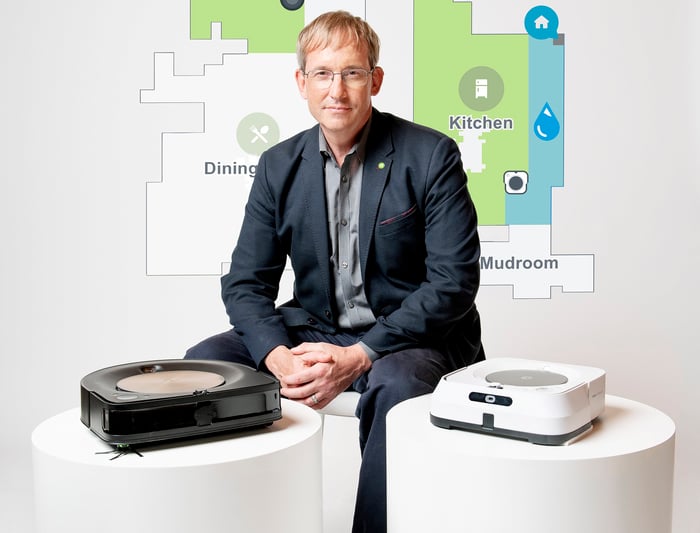 If recent patent activity is any indication, iRobot is still actively expanding its wish list of cumbersome chores to handle.

In a patent dated Nov. 5, 2019, and aptly titled "Cleaning of pet areas by autonomous cleaning robots," iRobot describes a system configured to first detect pet debris left in a pet area -- say, for example, a cat using a litter box, dirt near a dog door, or a bird eating seeds in its cage -- then navigate a cleaning robot to that area "to execute a cleaning mission."

The pet-cleaning patent also details systems for both wet and dry cleaning, as well as ventilation attachments to mitigate any "undesirable scent."

In another patent dated Nov. 12, 2019, and titled "Autonomous monitoring robot systems," iRobot describes a type of autonomous mobile robot equipped with a variable-height camera capable of allowing users to remotely navigate and monitor their homes.

Interestingly, this system echoes the capabilities of a variety of military robots sold under iRobot's old defense and security (D&S) segment, which it divested in early 2016 to focus on the home robotics market. To that end, it's worth noting this new patent also details a "privacy mode" in which the camera would be positioned in such a way that it's unable to capture images of the home.

Don't hold your breath yet

This doesn't guarantee, however, that investors should expect to see pet-cleaning or home-monitoring robots scooting around consumers' homes any time soon. After all, though iRobot's Terra mower is set to launch in the U.S. next year, we should recall robotics-industry watchers previously discovered robotic lawn mower patents from iRobot dating as far back as 2008. And even then, the yet-to-be-named Terra only truly began to pique my interest as an investor nearly five years ago when iRobot began to seek the FCC's permission for the necessary wireless certifications.

Still, these new patents offer an enticing peek at what could be coming down the pipe from iRobot as it works to expand its niche in the coming years. And that's exactly the kind of long-term thinking that patient investors need to see as they watch the growth trajectories of iRobot's current products play out in the meantime.