Collaborative communication software company Slack (NYSE:WORK) put up some impressive numbers in its third quarter, which was released after market close on Wednesday. The company's top-line growth accelerated as revenue soared 60% year over year. In addition, Slack's non-GAAP loss per share was much narrower than expected.

Leading up to the report, the Street seemed to be concerned that Microsoft's (NASDAQ:MSFT) Slack competitor, called Teams, could be taking market share from Slack. In November, Microsoft revealed that Teams had 20 million daily active users. Given that the figure is bigger than 12 million daily active users Slack said it had in October, it's fair for investors to worry that Slack's platform is facing some headwinds from Teams.

But Slack management isn't concerned. Management spent a significant portion of its earnings call on Wednesday explaining why it isn't worried about Microsoft.

Here's what management had to say. 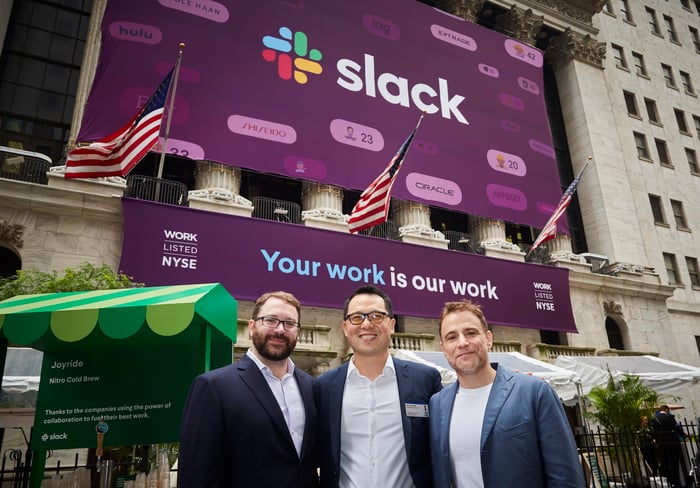 Office365 users are signing up for Slack

Despite the bundling of Microsoft Teams and other Microsoft-backed collaboration software into the Office365 subscription, Slack said the majority of its million-dollar-plus customers are also Office365 customers.

"In general, we continue to see tremendous adoption across customers of the Office suite," explained Slack CEO Stewart Butterfield in the tech company's third-quarter earnings call. "They choose Slack despite having a bundled alternative that is marketed as free."

He argues that Office365 users are choosing Slack because its breadth, scalability, integrations, and "the careful attention we pay to user experience which creates deeply loyal and committed fans."

Slack asserts that Teams isn't actually a competitor to Slack. "[I]n practice, [Slack and Teams] are different tools used for different purposes and our customers achieve markedly different results," said Butterfield. Noting that Teams user engagement numbers are far weaker than Slack's, Butterfield says, "if you need to work closely with colleagues in an environment that can integrate deeply with all the software you use, there is a clear choice -- and our customers know it."

But what about Teams' 20 million daily active users?

Addressing the elephant in the room, Butterfield explained why Teams' 20 million active users aren't as impressive as they sound.

First of all, Butterfield notes that this is only about 10% of Microsoft's Office365 user base. Further, the CEO says many of these users were the result of shutting down Skype for Business in July. Microsoft has been migrating those users to Teams -- an effort that should cause Teams' daily active user count to continue rising since Skype for Business was the technology behind many users' desktop VoIP (voice over internet protocol) phones and conference rooms.

While Teams could certainly morph into a more meaningful threat over time, Slack is convinced the Microsoft-backed collaboration product isn't competition to be concerned about yet.