Please ensure Javascript is enabled for purposes of website accessibility
Log In Help Join The Motley Fool
Free Article Join Over 1 Million Premium Members And Get More In-Depth Stock Guidance and Research
By Jeremy Bowman - Dec 6, 2019 at 6:30AM

The craft beer brand was a bad investment almost from the start.

Constellation Brands (STZ 0.79%) is waving goodbye to Ballast Point, four years after it acquired the brand. The Corona-distributor is selling the craft brewer to Kings & Convicts, a privately-held Illinois brewery founded in 2017. The price was not disclosed, but it is certainly less than the $1 billion Constellation paid for the brand in 2015.

Ballast Point struggled in Constellation's hands after it took the label national. The company twice wrote down the value of the brand, by $87 million in 2017 and $108 million earlier this year. And this spring, it revealed it was shuttering two Ballast Point facilities and abandoning plans for a brewpub in Southern California. 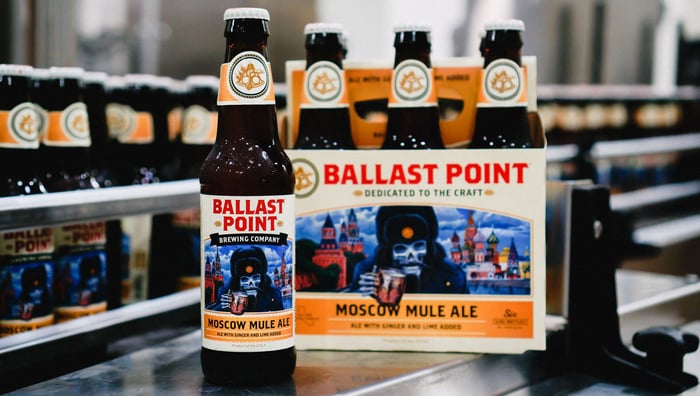 "Trends in the U.S. craft beer segment have shifted dramatically since our acquisition of Ballast Point," CEO Bill Newlands said in the sale announcement. In addition, he noted, "This decision allows Constellation to focus more fully on maximizing growth for our high-performing import portfolio and upcoming new product introductions, including Corona Hard Seltzer, scheduled to launch this spring."

Constellation said it expects margin and depletion trends to improve slightly following the sale, which is set to close by February, further making it clear that Ballast Point has been a headwind to the company's overall performance.

Implicit in Newlands' statement is the admission that the company misread the story in the craft beer segment. Though sales in that niche are still growing, with volume up 4% last year and dollar sales up 7%, outperforming the overall beer industry, the momentum has slowed considerably from the double-digit growth earlier in the decade. There are also signs that Constellation made some particularly poor choices with Ballast Point.

According to Beervana Blog's Jeff Alworth, nationalizing craft beers caused them to lose some of their appeal and pricing power. And Ballast Point in particular was poorly positioned when, soon after the acquisition, beer drinkers' tastes in IPAs shifted toward "hazies" -- dense IPAs that came out of New England and are less bitter and more fruity than the San Diego-style Ballast Point.

Constellation Brands is far from the only brewer that's struggled in the craft beer segment. Sales of Boston Beer's flagship Sam Adams label have flagged in recent years due to rising competition from microbrewers. Anheuser Busch InBev recently strong-armed Craft Brew Alliance into selling itself and its portfolio of beer brands, including Kona, for $16.50 a share, the same price it was trading at this summer.

What's next for Constellation

Though Constellation is clearly taking a bath on the sale, ditching Ballast Point at this point is probably the right thing to do. However, the decision also calls into question Constellation's more recent acquisitions of Funky Buddha in 2017 and Four Corners in 2018, both of which were for undisclosed amounts but likely much lower than the $1 billion it paid for Ballast Point. Constellation seems to have learned its lesson -- rather than rapidly expanding those brands nationally, it's growing them at a more methodical pace.

But craft beer isn't the only area in which the company has struggled. Its deal with Canopy Growth (CGC -12.07%), taking a 38% stake in the cannabis grower for nearly $4 billion, so far looks like a similarly expensive error. Canopy stock surged to an all-time high near $68 per share shortly after Constellation announced it would be buying 104.5 million shares at $48.60 in the Aug. 2018 deal, but the stock is now trading at just $25 per share (share price figures in Canadian dollars).

The company's stable of Modelo brands, including Corona, continues to see strong growth, and Corona Hard Seltzer has the potential to be a big winner as hard seltzer has emerged as yet another popular challenger to craft beer.

However, the Modelo deal that helped drive Constellation's stock price up nearly 1,000% over the six-year span that ended in 2018 now looks like an anomaly instead of a pattern. While its Modelo brews should help Constellation continue to outgrow the beer industry, the days of management making big bets with the goal of driving explosive share-price growth seem to be over.