Transocean (NYSE:RIG) is one of the largest offshore drilling contractors in the world, but it has a shaky past. The company attracted international infamy in 2010 when its prized Deepwater Horizon offshore rig, under contract for BP, had a wellhead blowout that resulted in the largest marine oil spill and one of the largest environmental disasters in U.S. history. Since 2010, Transocean's stock has proceeded to fall 94% against the S&P 500's gain of 182%. Transocean has sunk to what it hopes is rock bottom, but is it a buy? 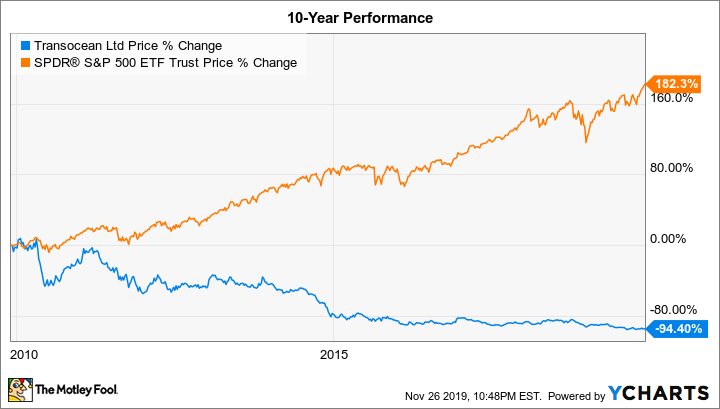 Since the oil downturn of 2015, many energy companies have been pressured to cut spending and increase the efficiencies of their assets to be able to generate cash flow in the $50 to $70 oil environment. The quickest and cheapest way to do that has been to focus on onshore unconventional drilling.

Unlike the conventional drilling practices that made up many of the first major oil booms in Texas and led to the rise of Middle Eastern oil dominance, unconventional practices rely on technologies such as hydraulic fracturing and horizontal drilling to access tight shale rock formations. Today, these technologies have opened doors to quick returns available in the large shale formations that have been instrumental in making the United States the No. 1 oil- and gas-producing country in the world. Large-scale, capital-intensive offshore projects simply aren't as attractive when compared to the advantages that onshore now has to offer. 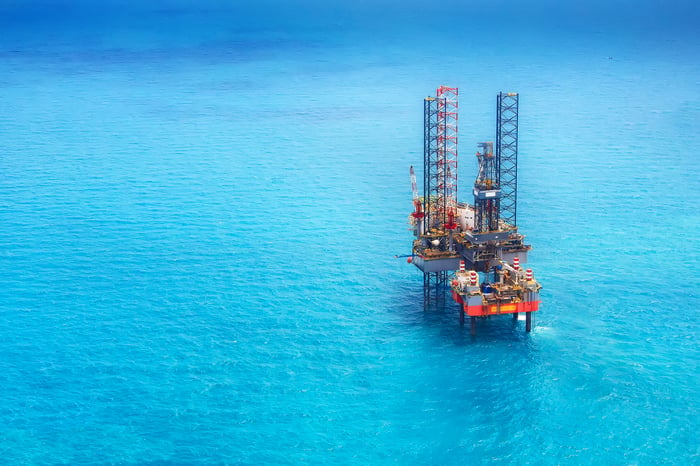 In early September 2019, the number of onshore operating drilling rigs in the United States fell below 900 for the first time since 2017. Today, the rig count is barely above 800.

The Baker Hughes Rig Count acts as a yardstick for onshore drilling contractors, but don't let it affect your analysis of a pure-play offshore driller like Transocean. In fact, even though onshore numbers are in a seemingly endless freefall, offshore numbers look significantly better. According to IHS Markit, the worldwide offshore drilling marketed supply remains about the same as last year, but market utilization rates are up to 84.9% from 75.5%. While that sounds like good news for drilling contractors like Transocean who make money by leasing their rigs, crews, and equipment to operators, the company's rig utilization stands at a mere 69%, significantly underperforming the broader offshore market.

One of the reasons for the lack of major investment in the Gulf of Mexico is competition from less costly alternatives in mature fields like the North Sea, which is dominated by Norway and the UK. As you can see, Transocean's harsh environment rigs are doing just fine, of which all 12 that are in use are in the North Sea or Canada.

The main problem for Transocean is simple. 28 of their 45 rigs are ultra-deepwater, and that's just not something the offshore market is using as much right now. Comparatively, almost all of their harsh environment rigs are in use, which makes sense given the North Sea's high 89% utilization rate.

The market is underdelivering

2019 was supposed to be the year that offshore turned it around, but the year began with some of the "lowest activity levels seen in 20 years," according to a report by McKinsey. New project investments were initially expected to reach a value of $123 billion in 2019 but only surpassed $50 billion in July. According to Rystad Energy, 15% of the $123 billion in investment was dependent on a breakeven price of $60 per barrel, meaning investment is highly unlikely, as oil has been ping-ponging between $50 and $60 per barrel for the latter half of 2019.

Additionally, projects that break, even when oil is in the $50s, might see their investments fall flat, as that breakeven price is too close to the current price of oil to warrant the massive scale, logistics, and sheer capital needed to successfully hit forecasted targets.

Transocean had negative free cash flow for the nine months ended September 2019, as well as negative earnings per share. Since 2015, Transocean hasn't paid a dividend. A lack of payout is common among the many cash-strapped drilling contractors of today. Transocean is completely tethered to an offshore business climate that desperately needs investment, and even if it comes, it could take years before it affects Transocean's bottom line.

Transocean's fall from grace is similar to the fate of the rest of both onshore and offshore drilling contractors. Most companies in the cohort are at or near 10-year lows. If you're a believer in offshore turning a corner and investment picking up, Transocean could be worth considering.